It was a really hot and long summer day. Me and my friend James were quite bored. I was just wasting my time on my phone, when an ad popped up: “bored? don’t know what to do to make this a better day? Try one of our reality bending spells”. I found it funny, and normally I wouldn’t have clicked on a web ad, but I was just so bored, that I decided to. Plus I wasn’t the smartest guy. A text website that looked at least a couple of decades old, openned up. “Choose a spell”, I browsed through the list, but most of the spell names just sounded like mumbo jumbo to me. “I’ll just click one at random”, I said outloud as I clicked on “Spell 76”.

I read the spell description, “turn your victim into a hot woman”. I thought it was stupid, but I told James about it. “Maybe I should try it on you” I said. He agreed, “sure, why not?, its not like it will work”. I started reading the spell, and as soon as I finished my cellphone turned off. “what the?” I said, while trying to turn it on. “Battery must have run dry or something” I said. I was so distracted by it, that I didn’t noticed what else had happened.

She then grabbed the hose that was filling the swimming pool, and pressed on the nozzle,a short stream of water came out of it, “Doesn’t this give you any ideas of what to do to me?”. Although I tried to hide it, I felt quite excited. “Oh I see you got the idea” the girl said while looking at my erect equipment. For a few minutes I forgot about James, she took her clothes off, and we had sex right there. She was quite kinky, I think she even bit me several times. She seemed to enjoyed when I licked her nipples, she moaned like a crazy bimbo when I thrusted in and out of her. Funny, I could swear it felt like she was a virgin, “no way a girl as hot as her could be a virgin” I thought.

“Maybe we should continue this upstairs” I said. She didn’t let go off me, her legs were wrapped around my waist, my thing was still inside of her, and her bare breasts were pressed against my chest. I hugged her, and walked upstairs with her. She was quite light, which was to be expected for such a thing girl. We continued having sex, and after a few minutes I finally came inside of her. We cuddled for a while. About after an hour or so, I woke up saying “shit! James?”, the girl then interrupted me, “don’t ask about him again, he is gone, replaced by someone better” she smiled, “I am Jane by the way, and I promise you will never have another boring day”. By then I finally understood what had happened, sometime I do miss James, but Jane is quite a replacement, and nobody seems to bother, her parents think she has always been Jane. 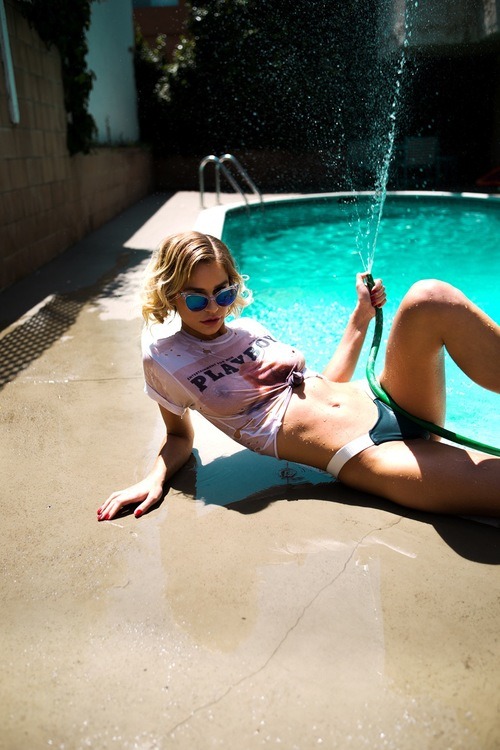