One morning in the store I was flipping through the paper and noticed a story about a group of men on a college football team harassing the cheerleaders at their school, and an investigation taking place. The story seemed very sympathetic towards the men, which I found ridiculous. If I have learned one thing since my transformation, its that men can be really disgusting.

It seemed destiny then when a woman walked into the store and noticed me reading the story. “I can’t believe the way they wrote that article” she said to me. “Are you familiar with the story?” I asked. “Familiar!? Ha, I’m one of the cheerleaders, Joan. The Quarterback threatened to kill me when the story went public.” She seemed visibly shaken.

“What if I could help you get real justice in this situation?” I asked her.
“I’d love it, but how?” she asked.
I explained at length my involvement with magic, and my passion for righting wrongs in the world in whatever ways I could. We hatched a great plan. In the end she left with a tiny magic idol, and specific instructions. In the meantime, I made a quick call to the CEO of Hooters, who knew the Wizard quite well. After a few hours had passed, I picked up the magic mirror to check in on her progress.
——
Joan was in the mens locker room. She knew the area of the locker room that the troublesome group of 7 liked to hang out in, so she headed back there, left the idol on a bench near their lockers, and hid in a corner when she heard them coming in the room.

“Good practice bro” one jock said to the other.
“Can you believe those accusations against us in the paper? So ridiculous. Good thing the coach is talking to the Judge and offering him some benefits with the team.”
“Yeah that Joan bitch will pay.”
Joan just seethed from her hidden hiding spot.
“Whats this?” One of the guys said, picking up the idol.
“Not mine” answered the other guys as they all got out of their uniforms.

Joan was a little disappointed nothing had happened yet. Until one of the guys pulled out a pair of tight orange shorts instead of his jeans. He looked at it oddly for a second, then started putting it on. As she looked around, so had the other guys. The shorts looked funny on them, and she had to hold back a giggle. Then, instead of shirts they all started putting on jerseys that said hooters on them.

They all looked at each other. “What are you wearing dude?” one asked the other. “Same thing as you man, why is your hair so long?” “what?” “Whats going on?”

Joan watched in amazement as all 7 of them suddenly had much longer, and more feminine hair. She noticed that their faces were looking different as well. They were all mumbling to each other, confused at what was happening. Joan was smiling deviously as she watched all 7 of them suddenly sprout sizable breasts. They all looked at each other in shock, but then with even more horror as they felt their junk moving back inside of their bodies, until their tight orange shorts showed only feminine curves, with bigger butts and long luscious legs as well.

Joan stepped out and just started laughing at them. “Finally you get what you deserve! Now you will understand what sexual harassment is!”

The former quarterback, now a cute and petite blonde, walked towards her “what did you do to us bitch?”

“Nope none of that attitude anymore! The final change is about to happen- changing your minds and personalities to better fit these beautiful new bodies. Your old male selves will still exist in the back of your mind, but they will be held captive to your new feminine urges. And for extra fun, you will both crave sexual attention, but hate sexual harassment. So have fun with that suckers!”

All of them looked at her dumbfounded, one even started crying. But then suddenly a blank look came over their faces, as their lives were rewritten.

That was my cue, and I summoned up some magic to warp them to their new jobs. Then used the same magic to warp myself and Joan to observe them.
—
“Well Joan, what do you think? It turns out Hooters was putting together a team for the Lingerie Bowl, so the CEO was more than willing to take our donation.”

“Bella, I love it. Thanks for helping out and getting me some real justice. Hopefully they learn their lesson. But watching them have to do this is pretty entertaining too!”

We both laughed as the girls took to the field, with plenty of harassment coming from the men in the stadium as well. Don’t mess around with Bella or her friends. 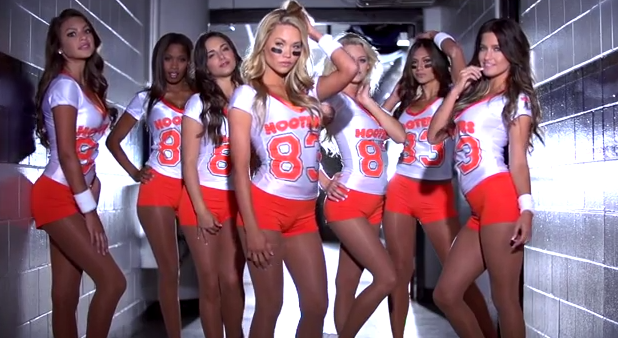