Hi, my name is Luke and I’m 33 yrs old. I bought a house 10 years ago after college and the only way I could afford it is to have roommates. Initially my friends lived with me but over the years they moved on with their lives and moved out. I started renting to girls and for whatever reason it seemed only girls in their mid 20’s answered my roommates.com adds. I’m currently renting to Lana and looking for another roommate.

I knew renting to girls was risky due to my fetish. It started when I was a teenager. I was snooping in my sister’s room when I noticed a pair of her dirty panties lying on the floor next to her shorts. There was a different color in the spot where her pussy touches it but it didn’t look like pee stains like my dirty undies. It wasn’t dark brown or reddish so I knew it wasn’t from her period. Not really knowing anything about girls bodies at the time this really intrigued me. I had to confirm it wasn’t pee. I brought the panties to my nose and smelled the spot. That was the moment I smelled pussy for the first time. It was euphoric and I got hard almost instantly. Up to the point I was a sophomore in high school and my sis left for College I smelled her panties every few days. I could tell where she was in her monthly cycle even. The closer she got to her period the sweeter and more pleasant her odor was. During her period the odor was less pleasant.

The next time I smelled panties was in college. I was at a neighbor’s party and she started a game of spin the bottle. One dare led to another and before you know it I was dared to swap underwear with her. The following morning when I woke up in my bed I realized I was still wearing her panties. :)- She never asked for them back either. Besides that lone pair I had not smelled another set of panties. Yes I’ve had girlfriends and I enjoy eating them out but I was always able to resist tampering with their underwear.

Now that I’m living with girls again I have not been able to resist. I sneak into their rooms when they are not home and do my best to return the panties to how I found them. They have never said anything to me but I just can’t seem to get them to stay longer than 6 months before they move out. Their reasons for moving out always seem legitimate though. I went for 3 months with both extra bedrooms empty before Lana moved in. I really like her and don’t want her to move out so I’m going to resist my fetish.

A couple months have gone by and I’ve been a good boy. Things are going great and Lana is so sexy. I give her space but we still end up spending time together a couple times a week. We have become best friends and she often asks me to help her pick out clothes to wear. We cook together, snuggle on the sofa to watch movies, and go out clubbing too. I would swear we were boyfriend and girlfriend except for the fact we have not kissed or had sex.

Today Lana went for her run as usual. She got back and was all sweaty but damn she was sexy! After her shower she was in her room lying on the bed looking at Facebook when she yelled for me. I walked in to see her wearing a tank top and booty shorts. As she’s telling me how happy she is living here and intends to stay for a long time I notice her sweaty running pants and panties still in the waist of them. I told her I’m excited to hear that and she is welcome to stay for as long as she wants. Shortly after I left her room she then left the house to hang with a friend. I’m doing my best to resist but I can’t stop thinking about her sexy body and her panties just lying there right in the open. I give up, I just can’t resist. I picked up her panties and they were still damp with her sweat and juices! One whiff was all it took for me to become addicted to her scent. She smelled better than any girl I had smelled previously!

As the weeks went by I continued to raid her dirty panties. Everything else appeared to be normal between us so I’m feeling confident about it all. There was however a strange bottle she was keeping in the fridge that had a small amount of clear liquid in it. As the days went by the bottle became more and more full. A couple more weeks have gone by and the bottle is completely full, I’d estimate it’s about the same amount as a 20 oz bottle of Mountain Dew.

Its movie night and we are cuddling on the sofa. She hits play and a picture of her room is on the screen. I watch in horror as I come into the room, dig through her dirties, take a sample sniff of her panties and then walk out with them. Lana then tilts her head up to look at me and says busted. All I can say is I’m so sorry. She says she’ll accept my apology under one condition. I have to drink that bottle of fluid she’s been keeping in the fridge. She gets up, goes to the fridge, and brings it to me. I take a sip to taste it. I say “this tastes like pussy juice”. Lana then says “it should, it’s my orgasmic fluid that I’ve been collecting.” With that I drank the whole bottle. Lana then says “With that much female fluid in you the x virus should take effect fast. What, you didn’t think you’d get away with it that easily, did you? Since you like smelling pussy so much I decided to give you your own to smell.” I then asked what is the x virus, but it wasn’t my voice! My voice sounded like a girls!

I then became super warm like I was running a fever. Lana helped me take off my clothes so I could cool down. I watched in awe as my arms and legs decreased in length. The hair pulled in to leave smooth soft tan skin. At the same time I felt my scalp tingle and I felt as my hair touched my shoulders and continued down my back. My muscles started twitching and they became less defined as they smoothed out to leave a toned and womanly figure. I felt as the extra cells in my body shifted and my ass grew. My bones were changing on a cellular level as well. It didn’t hurt as the cells moved to make me shorter and also reform my hip bones so that I had a woman’s hips and pelvis. I could feel my face changing. It was like it was tingling. It’s now been about 5 minutes and I look like a girl in every way with the exception I don’t have breasts or a pussy. Just then I started to have pain for the first time. My insides started twisting and reforming. I looked down to see my beer belly moving in waves. My focus shifted to my nipples as I saw the areola widen to the size of silver dollars. My nipples started to change as they grew to the size of an eraser on the end of a pencil. Oh my belly is in pain. I felt things moving around and I assumed I felt my womb forming. My beer belly is getting smaller as breasts begin to form on my chest. I am growing boobs!!! I thought I would be hard looking at my breasts grow but I don’t feel anything. My balls! Did they? They just sucked into my body and I feel them moving. They are separating and each is moving diagonally up my abdomen. They finally came to a stop about halfway between my crotch and bellybutton and 3 fingers in from each side of my waist. My boobs now have great cleavage as I look down. They finally stopped growing and I’d estimate they are a C cup. The pain in my abdomen finally stopped too. I feel some final sensations inside as my balls, now ovaries, have the Fallopian tubes form and connect them to my womb. During the whole change I never noticed my dick shrink but I now feel a final tingling in my crotch. I feel the vaginal canal connecting to my labia. My slit forms and as I spread my legs I feel my lips pull apart for the first time!

We spent the remainder of the night going through her drawers and closet picking out a handful of items for me to have. The following day I came downstairs wearing only a black bra, green panties, and stripped green socks. You can tell I still need practice putting on a bra as the clasp is out of place. I guess Lana kept going through her stuff because there is a whole rack of her clothes in the family room with a sign that says Please Do Not Touch. I assume she is giving it to Goodwill. Why do I want to go through her clothes like I’m at a shopping store? Did my mind change too? Am I thinking like a girl now? Aww that top is cute! I’m rifling through the rack when Lana comes downstairs. She takes my picture as I turned to face her with a big smile on my face. I’m having so much fun!

It’s now been a year since I became a girl. Lana and I still live together and we are closer than ever! We are bffs and share everything. While my mind has changed and I’m acting mostly like a girl, I still am attracted to girls. Initially Lana was not into girls but as she helped show me the secrets of womanhood, she became a lesbian. She was right about one thing, I now get to smell my own pussy 🙂 but she now can’t stop smelling it either. She apologizes to me now that she realizes how hard it is to resist smelling pussy. Every time she apologizes I look at her in the eyes, say thank you for making me a girl, I kiss her and tell her I’m yours forever. 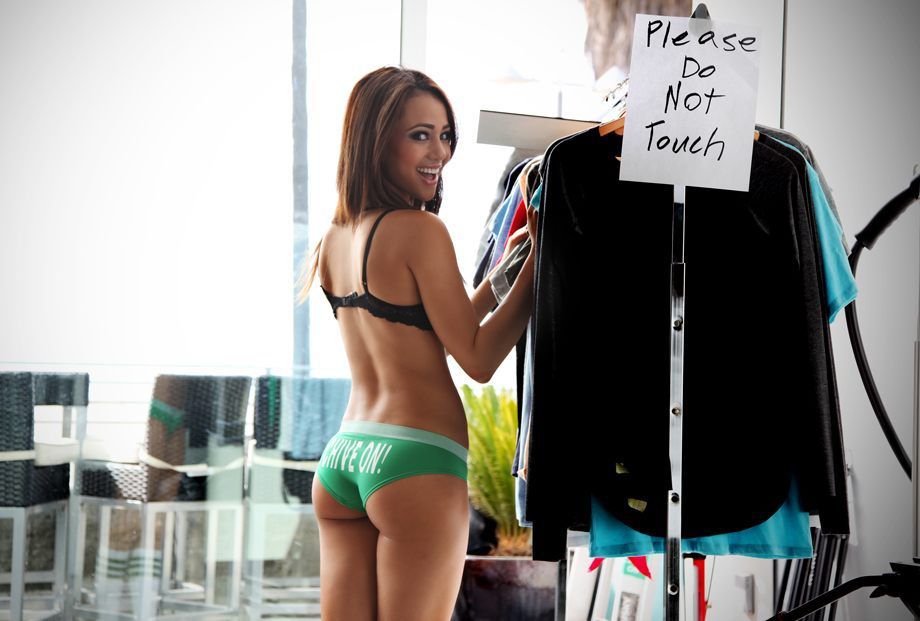