Not quite what you’re thinking

You may think that’s me, the blonde, and if you’ve ever read these kind of stories you would think this is punishment for cheating or something but things aren’t always what they seem. You see I’m actually the brunette and the blonde is my girlfriend. I should mention that I used to be a man but you probably knew that too. We were just friends before. I had thoughts of us being more but she was a lesbian so I played the dutiful male friend. I envied the women who got to sleep with her. I would’ve done anything to be a woman and be with her. My options were limited of course. Basically there was only one way, sex reassignment surgery. I wasn’t transgender though. I was in the right body for me just not for us.

There I am sitting on the bed watching my best friend get off plunging a fake cock in her wet pussy and my real cock was straining to get out and couldn’t. What she did next was shocking and life changing as you will see. She pulled out the wet dildo and she offered it to me. I was so confused. I could taste her, finally, but in order to do that I had to suck that fake cock. She brought it up to my nose and it smelled divine. I wanted to do it, I knew I did but of course that macho male part of me was telling me no way was I putting that in my mouth. Guess who won out, pretty obvious right.

I opened wide and let her slide it down my throat. That’s exactly what she did too. She didn’t just give me a taste she plunged that thing into my mouth and I ended up with a good eight inches. Turns out I don’t have a gag reflex and have a perfect throat for sucking cock. I closed my lips around it and just basked in the taste of it. She teased me after of course about how much I liked it. I thought, oh great I can’t be with the lesbian that I love but I could make some guy really happy. Not what I wanted to get out of this encounter for sure.

This is about the time the magic part of the dildo made it’s presence known. I started feeling really weird and dizzy. I laid down on the bed and Jill comforted me telling me everything was going to be fine. It wasn’t fine though. I was changing starting at me feet and working it’s way up my body. I was shrinking and hair was falling off my body. My hips and butt were getting bigger while my waist was tightening. When the boobs popped up Jill was more than a little concerned. She told me I was becoming a woman. My mind couldn’t process it. Not until my cock suddenly shrunk to nothing and out of sight and I felt the void left behind. Lastly my face contorted and softened and my eyes and lips became fuller and my cheek bones raised. She just starred at me for several minutes and then told me I was beautiful. When I could finally get up I rushed to the mirror and couldn’t believe what my eyes saw. I was woman, a sexy, hot woman. My dreams had come true. For the moment at least.

The next month was glorious. The magic was so complete that my entire life changed. I had always been a woman as far as anyone else knew and my drivers license agreed. That was a relief at least I wasn’t like illegal or something with no ID. So Jill took me shopping and I had so much fun. I loved wearing women’s clothes. I had never done it as a man but I took to it like it was my destiny. She showed me how to do my hair and make up and I even got a tattoo to celebrate.

I kept licking and sucking and enjoying that cock I didn’t notice her other surprise walk in. I had my eyes closed so when she pulled out I was going to protest but she quickly slipped it back in. Something was odd about it though. I tasted different and felt different. It was good, very good but not the same. It was when Jill came up behind me and told me to open my eyes that I got the biggest shock of my life. I was sucking a real cock. A very handsome guy was in front of me and his cock was buried in my mouth. I was going to pull back and get it out when Jill pushed my head and kept it still. She was telling me to calm down and just enjoy it. She knew I was, I knew I was. I couldn’t deny it. I wanted to be a lesbian and be with my lesbian lover but I had to face the truth I was bi. Pretty soon I was getting my first fuck from a man. He slid it into my pussy and I had the most mind blowing orgasm of my short female life. My mouth was free now though so at least I could lick Jill again. I brought her to orgasm too and wished her a happy birthday but I was getting the real present tonight and it was still coming. When he was ready to come Jill made sure his cock was back in my mouth and made me take his whole load. It was creamy and salty and delicious. I took it all in and held it in my mouth and showed them, opening my mouth wide and letting it rest on my tongue. Jill told me to swallow it and I did after wards showing them my now empty mouth. 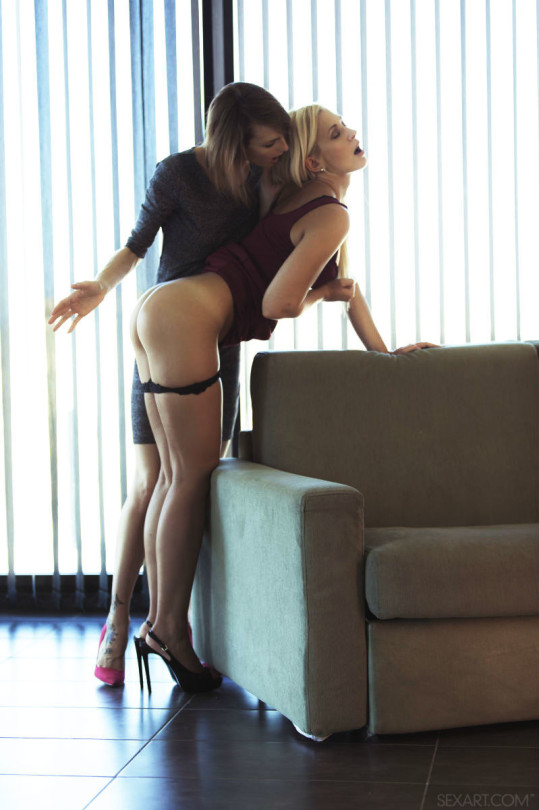