Alice stepped out from behind a tree, and saw the March Hare, the Hatter and a very sleepy dormouse sitting at a long table, set for a large amount of people, having tea. She approached cautiously she had already met a disappearing Cat and a smoking caterpillar, the scene already looked strange but from what she had learned of this world things could always get stranger. The hatter spotted her, a broad grin appearing on his face “sit, sit, we’ve heard so much about you and been waiting so long”. Alice looked about, the table cloth had clearly seen better days and on the forest floor there was a great deal of broken chinaware. She sat in the chair with the least amount of food stains, the Hatter threw a piece of bread at the March Hare “well go on, serve our guest”. The March Hare jumped into action, he chucked the tea out of the teapot and quickly went about making a fresh batch.

In all the activity the Dormouse woke up for a moment “what day is it? Is it nearly here? Is the prophecy true?” in response the Hatter threw a porkpie at her which she managed to dodge but promptly fell asleep again.

“Shall we play a game to pass the time while we wait?” The Hatter said to Alice, all of his hostility seemingly reserved for the other guests. Alice was feeling tired but didn’t want to offend her host so nodded. The Hatter had a glint in his eye like it gave him a special sort of delight to hear her agree “why is a human like a piece of clothing?”. Alice wasn’t very good at riddles, so was glad of the distraction of the March Hare returning to give her time to think of an answer. The March Hare returned carefully, holding the teapot as far away from himself as possible, he reached the table and she heard the Hatter hold his breath as he poured it out. The March Hare then placed the teapot down and step back, Alice was amused by this little display they clearly cared a great deal about impressing her despite the mess that covered the table plainly demonstrating they generally lived in chaos.

Alice picked up the tea and hesitantly sipped it, due to the March Hare’s care she had expected the tea to be boiling hot instead it was quite cool but it didn’t take away from the taste “that’s probably one of the best cups of tea I’ve ever had” she said honestly. The Hatter looked delighted and the March Hare looked relieved while the Dormouse continued to sleep. The Hatter looked down to check his watch, which Alice noticed wasn’t ticking “you should get that wound up”.

“YOU should mind your own business” the Hatter snapped back before he could stop himself.

The March Hare jumped in “what- what my friend means is that his watch is very precious and….” The March Hare trailed off clearly unsure of what he was saying.

“Have you thought of the answer? To the riddle?” The Hatter asked putting his watch away.

Alice sipped tea and thought, how was a human like a piece of clothing? Maybe because they were both created by people, or they changed from year to year, or maybe there was a piece of clothing for every human. Alice had to admit to herself she was stumped. The Dormouse opened its eyes and yawned “is it time? Though I suppose it doesn’t matter, time is just a figment of the imagination of dull people so they can complain about unimportant things” for the Dormouse’s outburst she received two pieces of food flung at her.

Alice yawned, she was finding it difficult to think of any solution to the riddle “I’m sorry, I haven’t the faintest clue”.

“You should cut your hair” the Hatter said unexpectedly “it distracts the eye from your lovely bosom. I do like your choice in dress, I don’t think there will be any need to change your wardrobe when we get back” the Hatter laughed although Alice didn’t find anything he said the least bit funny.

“I don’t like your tone” said Alice, very confused at the sudden change in atmosphere at the tea party.

“I don’t like YOU, I’ve tolerated you as you try to figure out my riddle. Have you guessed it yet? Why is a human like a piece of clothing? Because you can wear both of them” the hatter laughed at his own confusing joke. “I wonder how many of your fathers business associates think of you when they fuck their wives, I wonder what part of your body they think about. Is it your breasts or your long soft legs that lead up to your tight cunt. You do know why all the old men want you to sit on their laps, you don’t want to admit it to yourself but you feel their hard dicks pressing against your ass and you like it. You dress up in childish clothes to get their attention, that makes you wet” Alice had heard enough of this rudeness and tried to stand up but her legs felt too weak, there must have been something in the tea. She could do nothing but watch as the creatures climbed onto the table and approached her “even now when you’re terrified you burn with desire, your body is crying out to be filled with cock, but first we need to fill you”. Alice’s cup fell out of her hand and smashed on the ground that was already littered with thousands of broken cups, the Hatter opened Alice’s mouth and stepped inside her, she tried to fight him but she had no control of her body as he slid down her throat.

Then came the March Hare and lastly the dormouse “finally we can escape this ridiculous world” she said as she slid down, Alice felt them fighting and tumbling inside her belly but it wasn’t uncomfortable it was the exact opposite, this was the best she had ever felt. She managed to get some movement back into arms which she immediately moved to rub her crotch which seem to have an insatiable fire. She moved her constricting underwear out of the way so her hands could get full access to her cunt, she worked the fingers of her left hand inside of herself as she imagined it was a dick belonging to a handsome man. Her right hand touched that special place above her pee hole that, when she was younger, her nanny had told her not to touch but why shouldn’t she play with it when it felt this good. Her hips moved up and down against her hands, the movement increasing the pleasure, she imagined multiple men using her and then covering her flesh with their seed. Alice grunted as she came, her whole body shuddered as her toes curled, she felt wetness flood her panties.

Then suddenly she awoke, her eyes blinked in the bright sunlight for a second before she recognised her older sister looking down at “oh Lorna I had the most wonderful dream”. Alice described to her sister her dream, she went into minute detail everything that happened at the tea party, especially the part after the other tea guests had entered her belly. Lorna went a deep shade of red as Alice went on about how many men she thought about using her. As Alice had slept Lorna had seen her touching herself but for some reason she hadn’t woken Alice instead she had watched as the girl with her head in her lap masturbated, she had felt herself getting wet under her many layers of undergarments. Lorna had slowly reached out to Alice, not to shake her awake but to tweak an inviting nipple which had slipped out of her blue dress when Alice had cum and suddenly awoke. Now with Alice describing how she imagined men using her, even putting it in her ass, Lorna was struggling to stop herself from reaching under own dress and touching the area of her body that only deprived women touched. Alice finished her story “Lorna you look tired, you let me rest my head on your lap when I was tired, why don’t you rest your weary head on mine and let me watch over you while you sleep”

Lorna yawned “yes, maybe that’s a good idea” she rested her head in Alice’s lap, she could feel the heat radiating from her sister’s crotch and smell her alluring sent. Lorna yawned again, as she fell asleep Alice stroked her hair and when she went into a deep sleep Alice helped Lorna’s hands get under her thick dress to her crotch as she dreamed of tea, mad Hatters and the male anatomy. 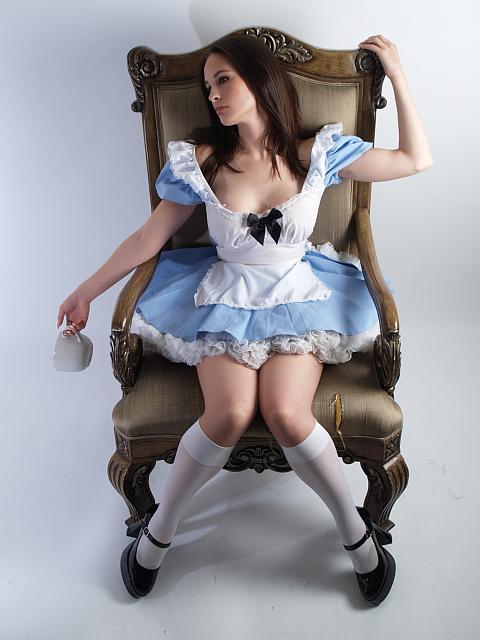