The two sides of the wishing coin

When my roommate Jonathan and I returned to our room from the campus, we were puzzled to find a wet golden coin on our carpet floor. It wasn’t there when we left the room. Neither of us has seen it before. We wondered how much it was going to worth. I reluctantly picked the coin up to stash it somewhere safe and to clean the soaked carpet. Suddenly, a fairy popped out from the coin.

“Howdy! I don’t know if you remember, but you two have been very generous at my fountain. So, I am the wish fairy, here to grant your wishes!” said the fairy. Apparently, she was the fairy of the campus fountain, which was nearly abandoned. I recalled Jonathan and I were having a competition of how far from the fountain we can throw pennies into the fountain. We got carried away… and there she was. The wish fairy in our room.

I turned to Jonathan and he was seeing her too. I wasn’t hallucinating at all. The fairy told us that she’ll grant only one wish to each of us, and it had to be possible in the physical realm, or it will be voided. Our one chance at wish gone forever. And I was given the first chance for touching the golden coin first.

I thought about ‘being possible in the physical realm,’ so I didn’t asked for a superpower or an ability to summon gold bars. It had to be at least somewhat real… I pondered. So, wealth it is, I decided. I wished for a winning lottery numbers for next decades, so that I can legally acquire ridiculous amount of wealth without the government getting suspicious. The wish fairy granted me the wish and gave me a notebook full of numbers and dates.

It was Jonathan’s turn. I told him I’d share the portion of my lottery money, and suggested he ought to wish for something other than wealth. Here, I got slightly worried. If what I read from the internet about the wishing coin is right, this was the part where Jonathan wishes the fairy to transform me into a nymphomaniac bimbo. But I guess I was the only one with the dirty mind.

Jonathan just wished to marry a woman of his dreams. He went on to describe the dream girl of his. Long, reddish hair, pretty face, model-like body, hot, juvenile looking… but he went on and on. The dream girl was always willing, horny, submissive, in love, healthy… and he even added in the political preference to the history of the girl and him in the past. Apparently his ideal woman should have known him for a long time, and even longed for him for a long time too. I slapped my face with my palm. Where on the Earth would such perfect girl exist? If anything, Jonathan’s wish was as unreal as the wish fairy herself.

The fairy shook her head, too. She stated that there aren’t too many people befitting his qualifications. Both I and Jonathan were surprised. Not too many? That meant there was at least one person who met all of Jonathan’s long list of criteria. We both shouted at the fairy that she’d do so right now, if there was one. What was the problem?

“Well, you asked for it.” said the wish fairy as she swung her tiny sparkling wand. The fairy dust flew across the room toward me. I gasped in surprise as the fairy dust got sucked into my mouth. And my transformation began. My blond hair turned fiery red as they elongated to belly-level. My face shifted into a feminine, pretty visage. My body was morphing into a soft, slender, shorter shape and for some reason, I liked it. I looked down my trembling body, and I saw my manhood disappearing and tits protruding. When I saw the red hair touching my shoulders, I realized I had transformed into Jonathan’s dream girl.

“Hey, what the heck!” I shouted in an unusual high-pitched voice. Jonathan was trying to hide his smile and joined the protest for the sake of his rich roommate. The fairy explained that although altering appearance is physically possible by means of surgery and hormone therapy in the real world, altering the past is impossible for her. Then, she reminded us the fact that Jonathan and I were the childhood best buddies until Jonathan suddenly moved away. And when we were reunited in the college, we were so happy to see each other. Hence, I met the criteria of having known Jonathan for a long time and having longed him for a long time. Met the political thing too, she added.

“Ah… sorry about that.” Jonathan said as he patted my back. “You know I didn’t mean to…” he apologized profusely for his wish gone wrong, but I couldn’t pay attention to what he was saying due to the massive hard-on Jonathan was having. Jonathan noticed I was eyeing his bulge in his pants and his face turned ripe apple red. “Oh! I’m sorry! I’m sorry! You are just my perfect girl… and you know. Biology stuff, I can’t help it man.”

I knew. But being called ‘my perfect girl’ might have turned my female body on. My body was shaking in an anticipation. It was screaming, go for it girl. I’d later learn that the male libido doesn’t translate very nice to the female body… but that day, I thought I was losing my mind. I rolled my loose jeans down to my ankles and threw my undies to my side. I pulled my sleeveless shirts and showed my naked breasts to Jonathan.

“Hey! What are you…” Jonathan covered his eyes with his hands and tried to run away from the scene.

“Jon, are you man enough?” I taunted. How could resist the girl of your dreams asking for sex? Jonathan ran to me and nailed me to the wall and fucked me like I was his love doll. Even before my feet could touch the floor again, I probably cummed five times.

With all the money from the lottery, Jonathan and I quit the college and traveled around the luxurious spots of the world. Paris, New York, Dubai, Tokyo, Venice… but none of those places mattered. All we did was making love to each other day and night. 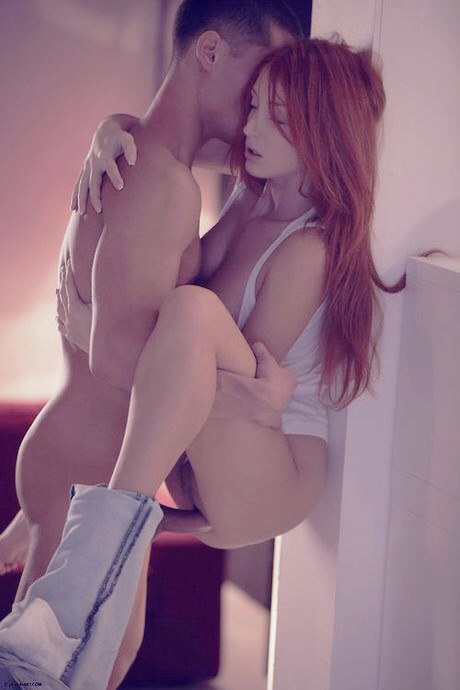