“Kyle. Greg. William. Happy to have you here”, Trevor cordially welcomed his friends. The three of them sat in the couch with a knowing smile on their lips.

Trevor continued: “Gentlemen, today I´ve got a real treat for you. I´ve managed to get hold of Samantha´s, Jennifer´s, Amandas´s and Bethany´s lingerie”.
A soft murmur came from the three guys on the couch.

“All of you know the drill, yo….”
“How did you get all those clothes?”, one of them interrutped from the couch.
“It was difficult but I managed to pull it off. I had to pose as my five year older sister and visit her friends. I even had to hold the medallion the full thirty minutes so I would act like her without thinking about it. So I borrowed all those clothing as her”. Trevor explained.
“Ah”.

“Where were I?”, Trevor continued. “As you know I won´t tell which clothes will belong to which girl. Who will make the first pick will be decided by drawing straws. The longest straw gets first pick. I`ll take the one that´s get left over. Fair, hmm? And all of us will only wear our knickers when changing”.
The guys nodded.

Trevor held out three concealed straws in front of his friends.
Kyle picked the one in the middle. He looked disappointed as it seemed really short.
William was next up. His pick was even shorter which made Kyle mock him a little.
Trevor revealed the last one to Greg which got a straw which length was in betwen of the two others. Kyle would be the one first to chose.

Trevor guided the three guys to a table that had already been prepared with four sets of clothing. Kyle walked up to the table and began examining the garments.
He mumbled to himself: “Amanda is somewhat bigger than Jennifer so that must be hers…” He continued to mumble to himself before picking his choice. “I`ll take this red one! It has to belong to Jennifer!”
Trevor smiled slyly as he knew the answer.
“Greg, you are next”.

Greg didn´t care which girl he became, he was more concered how the outfit looked. A good looking outfit ought to mean good looking girl. He picked up the red and black one and exclaimed: “Mine”.

Lastly we had William. Even with just with just two to chose from the took his damned time to pick one. Both Greg and Kyle began to be frustrated by his inability to chose.
“Just pick one!”, Greg stated with irritation in his voice.
“Alright, alright”, William glared back and picked the black/azure blue lingerie.
Trevor picked up the last one for himself.

“Before starting, is there anyone that want´s to go “full girl”? You know, touching the medallion during all the transformation and get her mannerisms as well? “
“Kyle? You got the longest straw. Do you want to?”, Trevor asked his friend.
Kyle shrugged his head. “Nah”
“Greg?”, Trevor turned to his other friend.
“Sure!”, Greg exclaimed excidetely.
“Great. You´ll be the last one to touch the medallion then.

The hair of the guys began to lengthen slowly. Their hair color began to change from brown to blonde, but in Kyle´s case who already had blond hair it only seemed like it became longer.
At the same time they also got a little bit taller and their boyish lanky bodies was slowly getting some meat on their bones.

Their butts began to expand at the same time their hip bone was growing. Their chest began to balloon outwards and you could start to see vestiges of what person they were becoming.
“No fair! Kyle cried out, his voice cracking betwen male and female. “I wanted to become Jennifer!”
“Chose better next time”, Trevor mocked him in return. “You will make a great Amanda though”, Trevor said and winked.

The changes progressed and after half an hour four attractive girls was standing in the living room in the house Trevor lived in.
“Wow girl! Your body look fantastic Beth….err….Will”, Greg exclaimed from Samantha´s body before reminding herself that the other girl wasn´t her friend Bethany but her male buddy William.
“It can really mess you up, doesn´t it?”, Trevor said to Greg.
“I guess so”, she agreed. “When I look at you I first see Jenny, Beth and Manda in front of me, then I remember that you just have transformed into them. It just feels more natural saying your girl names”, she stated.
“Hmm, what do you say “ladies”? Should we use our girl names?”, Trevor in Jennifers body asked his friends.
“I`m all for it”, Kyle said from Amandas form
“Sounds fun”, William agreed with Bethanys chirpy voice.
“Already there”, Greg added, who was more Samantha than Greg by now.
“Then it is decided”, Trevor in Jennifers body concluded; “We are girls now”.
“And as girls we have to look the part. Grab your clothes and go change. When done we´ll meet up in the living room”.
The four girls scattered to go find a room to change in on their own.

“What´s taking them so long?”, an annoyed Samantha asked herself before realizing that opposed to her they didn´t have the knowledge how to put on the clothes as easy as her, curtesy of the powers of the medallion when holding it to her during the whole transformation.
“Oh”, she sheepisly said to herself.

One by one the girls arrived in the living room, wobbling precariously on their high heeled feet. After a couple of pointers from Samantha and a littlie bit of practice they actually managed to walk around in them without any danger to harm themselves.
“Whoa! Look at the swing of my ass!”, Amanda said in amazement.
“That´s nothing. Look at this!”
After that it quickly escalated to became a contest of who could swing her ass the most from side to side when walking in heels. With her bigger butt and greater experience walking in heels, Amanda won hands down.

As the night progressed the girls was slowly becoming intoxicated by the wine Trevor had bought when impersonating his mother, letting them becoming more and more confident and relaxed in their bodies. Samantha had already began to tell stories from the real Samanthas life as if it had happened to her. The rest of the girls shrugged and had no idea what she was talking about.

Halfway into the night the inevitable happened. Three drunken guys in a girls body, and one drunken more-girl-than-guy girl became curious.
They helped each other off with their lingerie and began to caress their soft skins. It was tenatively at first but soon they began to find the right spots to rev their engines.

Four girls all in one bed. Touching. Kissing. Sucking.
Fingers probed the groin.
Moans filled the bedroom.
The smell of sweat and the intangible scent of sex.

One by one they experienced the most intense feeling of their life when their bodies rewarded them with the greatest pleasure ever known to womanhood. 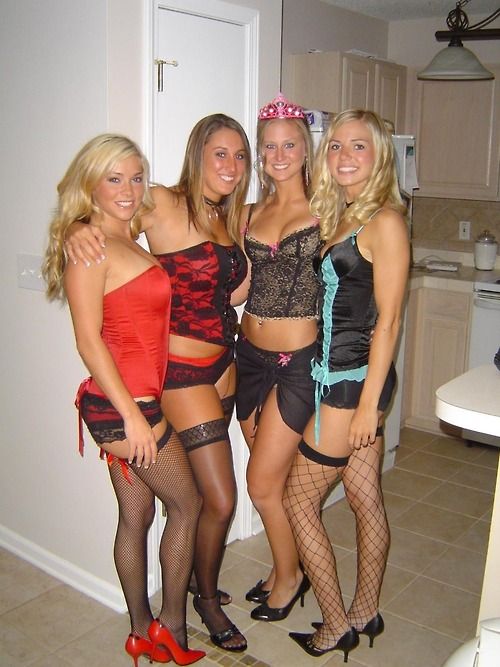