Glen’s girlfriend found out about his secret on their trip to Italy, after a long talk in their hotel room. Always an excellent boyfriend, Glen treated Skyler like a queen, and she consistently felt like she didn’t measure up on her end to his kindness and generosity. He had even paid entirely for their trip, without even asking for a cent from Skyler. She had to admit to herself she was a bit shocked and thrown a curveball when she heard the confession from Glen, not that he cheated or did anything bad, but that he, in fact, wanted to be a she. He wanted to be a woman. Skyler finally asked him a simple question.

Glen paused for a moment, thinking it slightly odd to tell Skyler and slightly odd that he had thoughts of it many times over, then responded to the question, “Skyler, you know I love you with everything I’ve got. Yes I would be you, but only if you weren’t you, or you wanted to be someone else or me or something too. I would never steal your body, not that such things are even possible. After all this isn’t some TG fantasy story, this is real life. I think you have a great body for a woman, and if I did that without hurting you, then I would be honored to have your lovely body, Skyler.”

Skyler responded, “Well, baby, thanks for admiring me so much that you would even be me. I consider it a compliment.”

Little did Glen know what Skyler wanted deep down. She had no huge urge to be a man or anything, but was curious about it, and considering all Glen had done for her in the past and was still doing for her even now, including his devoted honesty, she finally found a way to measure up to her boyfriend’s kindness and generosity. She would find a way to swap their bodies. She didn’t know if she wanted to be a man for life, but if that’s what it would take to make her boyfriend as happy as he’s made her, then so be it. She was willing to give up her womanhood, her beautiful curvy body for the love of her boyfriend Glen.

The next day, Skyler talked into going out on her own for a “lady’s day out” so to speak, where she would be on her own to do spa, get her nails done, hair done, get massaged, and just plan pampered. She told Glen he could do what he wanted as well, on his own. When Glen questioned this, as they had always done everything together, she replied she just wanted one day to herself, and she was not mad at him for wanting to be what she was by default, a woman. She, in her mind, thought she couldn’t blame him for wanting to be like her or even be her, she loved her body and womanhood. However, her motives were not on par with what she was talking about. She was going out to find a way to swap their bodies that night, and she knew of some back alley places in Rome where she might be able to get what she needed to make the swap happen, hopefully permanently. She would worry about the other details later, as to her living as a man, and how their relationship would proceed if they were in each other’s bodies.

Skyler got very lucky that day, only after two hours, she found an older woman who sold her a medallion that had magic powers, according to her anyway, and if the two really wanted a change, really truly desired it, then it would happen, the swapping of bodies between the two lovers. What fueled this talisman was the power of a couple’s love, that they loved each other so much that they would be willing to become each other even, the ultimate step, loving their partner so much they would become them. Skyler took the rest of the day to do the “lady’s day out” she talked about with Glen, perfectly covering her real motives.

She did make sure that night, however, that this was really what he wanted, discussing his desires to be a woman further with him. She discovered this went way back to his earliest childhood memories, and he really wanted to not be a “he” at all. She carefully placed the medallion between them after Glen had fallen asleep, and made sure she wanted to swap just as he was willing to. Finally she dozed off while Glen was already sound asleep, thinking of what it might be like to be a man, a sacrifice for the love of her partner Glen. When she woke, she might very well be on the other side of the bed, and he in her place in her soft curvy petite form, but then again, she had a hard time believing this was even possible. She would try however, and she’s learned sometimes things in life do surprise you. Perhaps this was one of those things.

Glen woke up first, however, he did wake up on the other side of the bed to his surprise and delight. He was in Skyler’s body. He could feel what it was like to be a woman, he was a woman, a real 100 percent woman. He touched his soft hair, his silky smooth soft skin, his modest yet pert breasts, and his groin, now flat and feeling different, a woman’s equipment below. He admired his tiny hands with long nails, and rubbed his round soft bottom, feeling it’s largeness and roundness, such a perfectly feminine bottom. He even gazed at his shapely smooth legs and the tiny feet at the bottom, wiggling his little painted toes with a smile. He could even feel how his lips were much fuller and thicker, and his face was way different, he had Skyler’s lovely face now, he was Skyler. Glen didn’t want to wake Skyler up just yet, he had to explore this further, even though he knew he should. He just wanted this moment to himself, and would worry about the how’s and why’s and what they would do later.

He pulled up a pair of her black bikini panties after slipping out of her jammies, noticing how different his crotch looked now, he had the perfect vagina confirming his womanhood. The panties fit right over his equipment perfectly, and felt feminine on his new form. He found some black pantyhose she had brought for going out clubbing, and just had to try them on. He had tried on hose before, his mother’s in fact, but now he was trying them on for a body that they were made for, a woman’s body. They felt amazing going up and over his tiny soft feet, shapely smooth legs and plush curvy bottom with wide hips. He knew exactly how to put on a pair of hose, in fact he knew how to put on about everything she had. He next slipped on her brown heeled boots, something she would wear to a club as well, they went well with the hose. She loved how her tiny feet and legs encased in soft silky material felt going into the boots, it was a new experience for him, not to be getting dressed in woman’s clothes, but getting dressed in woman’s clothes as a woman. Anything before was simple crossdressing as a man. This was a whole new level, these clothes were made for her body.

He walked to the mirror, after grabbing one of Skyler’s smooth stretchy Rayon halter tops, his hips swaying a bit, and his heels clanking a bit on the linoleum tiles of the hotel room bathroom. He smiled in the mirror, seeing a pretty face smile back, the face of his lover, the face of a woman, the face of Skyler. He admired his new looks, and was going to try on this smooth silky top to feel it against his breasts without a bra, to feel the silky fabric brush up against his sensitive nipples and breasts. He was in bliss. He stopped and massaged his breasts a bit first, then went to put on the halter, when his girlfriend woke in his body.

She freaked a bit, then smiled, realizing the medallion had worked, they were now in their lover’s bodies. She was now a man, and he was now what he had always wanted to be, a woman. She peered over at Glen, and seen him smile in her form, Glen was happy, therefore she was happy as well. She was not used to such a big strong hard body, much different than her former shell, but she couldn’t say all that bad. Her mild curiosity about being a man in the past helped her to not freak too much, and she felt strong and powerful, ready to take on the world. Glen had not even noticed she was awake, and she knew he was taking this time to adjust and explore, not wanted to talk to her just yet about the change.

Finally, Skyler came up behind Glen after he had just tied the halter, and untied it, “So how does it feel to get your life long desire? To be the woman you’ve always wanted to be. To be your own girlfriend. To be me. How does it feel?”

“It feels wonderful, exhilarating actually, this is everything I dreamed it would be and more. You’re body is amazing, it was before, but experiencing it from the inside, that’s a whole other level. I’m the happiest I’ve ever been. But what about you Skyler? Do you actually like being me, a big burly dude? For some reason I love you next to me, making me feel protected, and comforted, but I wouldn’t want to be back in that male body. I know we probably need to change back though right? This was gift to me I presume? It was beyond anything I could have ever imagined so, thank you,” said Glen with Skyler’s wonderfully feminine voice.

“Well, Glen, it’s actually going to be permanent, that is if you want it to be. We have 24 hours to decide, according to the woman I purchased the medallion from, the medallion responsible for, well, this. I’m willing to give up my body, my womanhood to make you happy, you’ve done so much for me already, and I want you to be as happy as you’ve made me. I’m willing to be your boyfriend, if you’ll be my girlfriend. Perhaps this relationship could take on a whole new level, thought it is odd seeing and talking to my former self, my former body that is. I will make this work if you want it to, sweeties,” smiled Skyler, eying her rock hard abs and bulging biceps with her large arms and hands wrapped around her former petite soft form.

One thing led to another, and let’s just say, they never left the hotel room that day. Nine months later they were already married, and Glen bared their first child, from Skyler’s body, a baby boy, whom they named Glen Jr. They were never happier, the swap had done them well, both of them. Glen now Skyler smiled in the mirror after feeding little Glen and singing him a song, she was perfectly happy and content, with a loving husband, a wonderful baby, an excellent body, and the intriguing ability to grow babies inside her new body. She was a woman, soft petite, curvy, and could grow a life inside of her, and most importantly she was happy.

She smiled in the mirror and through her plump soft lips said, “I’m Skyler, I’m a wonderful happy woman.” 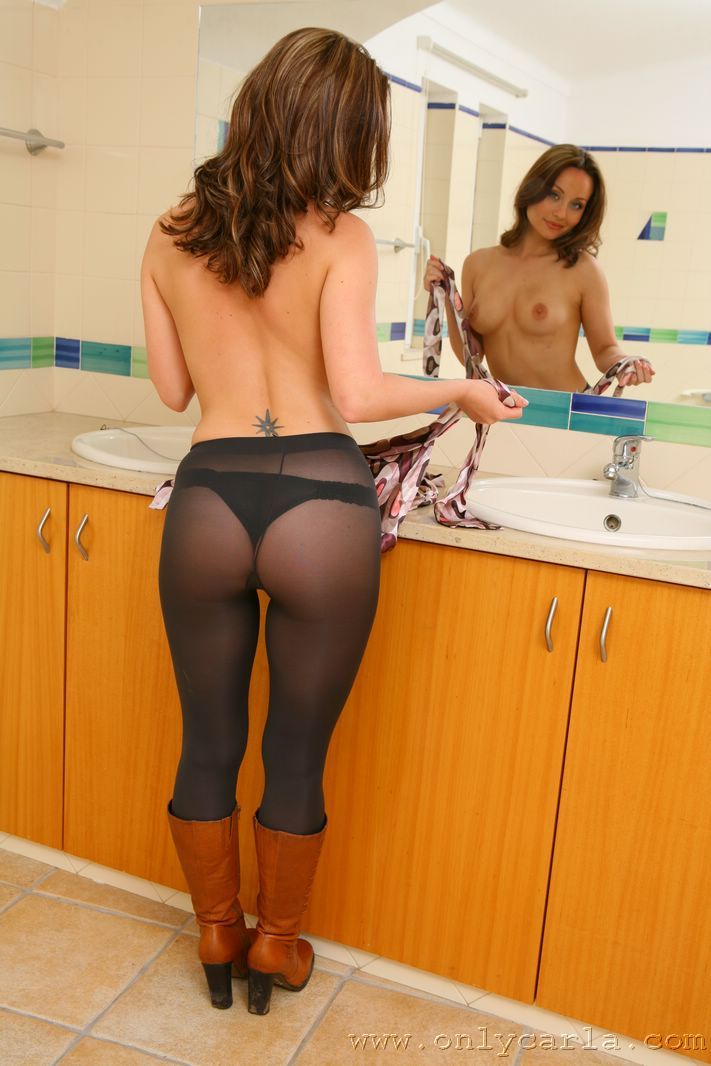