Ever heard of Ranma ½?
Me neither if you had asked me a couple of months ago. Ranma½ is an anime that revolves around a guy that turns into a girl if he get cold water on him. My situation is roughly the same but with beer instead. Warm or cold, beer transforms me into a chick.

It started with a drunk me hitting on a girl at the bar, she didn´t like the drunk me at all. One thing led to another, I called her frigid and hating men and she said that I had no respect towards women when drunk and that she would fix that.
That´s at least what my friends say, I don´t remember anything of it. I was too hammered that evening.

A week later, it was Friday evening, and it was time to spoil myself with a cold one. The same moment the first drops of the golden liquid entered my mouth my body turned itself inside out for a second and suddenly I was a girl.
I panicked a lot that evening.

I still love drinking beer but I can never do it at the bars anymore, my friends would freak out, so I keep it a secret. What I do instead when I want beer is to make into a happening.
I buy a couple of different brands, start up my gaming console, grab the control and throw up my legs on the table.
Then I take my first sip of my first beer.
The changes happen instantly and instead of me sitting in the sofa there´s a cute girl.
Taking my time I enjoy my beers to the fullest.
Being in a smaller body I can´t really tolerate as much alcohol anymore as before so I get kinda tipsy at the end. More than once I´ve been relaxed enough to explore my body a little bit more. Felt nice.

What changes me back? A glass of warm milk. 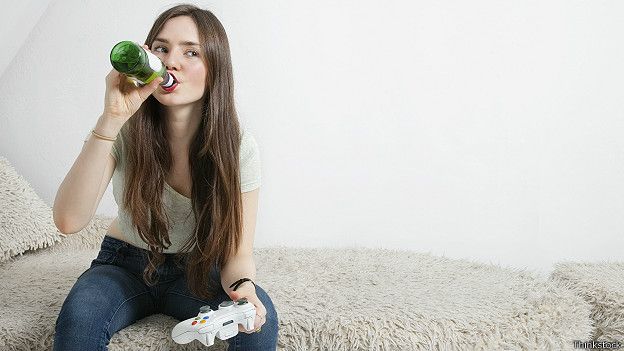