Stuck in the past. Part 9

(Writers note) I know its been awhile since the last chapter but i almost forgot i had a series ongoing. I hope there are still people looking forward to it. If you are new to the series or just want to refresh your memory type in the search bar #StuckInThePast

Scott has been thinking about the events since he traveled back in time to find his friend. He realized he may have been too rough towards his friend. It wasn’t Martin’s fault he ended up in the body of his mother. Scott was so nervous that he faild to see the struggle his firend is going through. Martin had to live as a girl, and not just any girl but Scott’s mother. He was fully aware of the consequences his actions migth bring and he tried his best to act like the real Laura, even if it meant being stuck like this and giving birth to his best friend in the future. Yet Scott acted like a whiny bitch and now he couldn’t forgive himslef. Not to mention Jenny. Scott didn’t admit it at first but he really was head over heels for her. He was so crazy about her he choose her side when the two girls had a quarrel. Now Scott lost his friend and he wasn’t sure if a simple sorry would be enough.

Scott decided to man up and take action. He must repair the machine and take his friend back to their times when they could forget about their weird adventure and just hang out like before. He didn’t see Martin for about a week. Scott was barely leaving the attic since he couldn’t look him in the face.
Scott grabbed his backpack and rushed to the school. He couldn’t belive he could run that fast. When he came into the hall he breathing heavily. He looked around and found Martin with thath douche, Chad. Scott looked closely what are they doing. “No way” He said. It looked like they were flirting. Martin was gigling when Chad whispered something into his ear. Scott’s eyes widened when Martin leaned over and kissed Chad in the lips. Terridied he rushed towards him. He called him but Martin didn’t hear him. Something was odd. All the people in school didn’t seem to notice Scott was there. They avoided him like he was some kind of invisible obstacle. Scott was standing few steps away form Martin, screaming his name but he didn’t react, nobody did. Scott started to feel week. “Oh no!” He cried when he saw his hands. His whole body was becoming transparent. “Martin please, it’s me!” Scott yelled but then everything became dark.
Martin turned around. He could swear he heard someone but there was no one behind him. Thinking it was just his imagination he went back to the class. 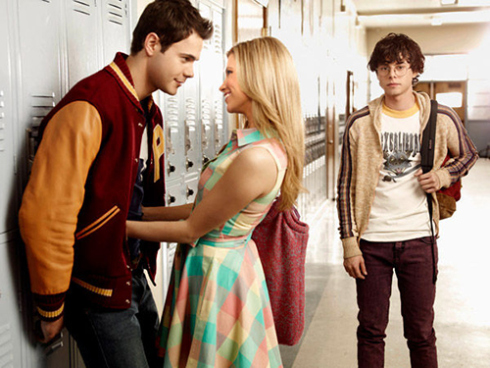