Stuck in the past. Part 4

Martin entered the school building, looking around the corridor to find Scott. Since their quarrel one week ago they didn’t talk too much and it seemed that Scott is avoiding him. “Where could he be?” Martin pondered, blindly walking around the school.He went to check the libary. He slowly walked in and saw Scott, reading some book. “There you are” Martin smiled and went towards him. He slowed down midway when another girl sat next to him. They were talking about something but Martin couldn’t hear it from where he was standing.
“Hey Scott. Who is your new friend” Martin smiled warmly trying to be nice. The girl looked at him scornfully and left. “What’s with her?” Martin was surprised by her behavior.”She gets bullied by the types like you” Scott said. “What do you mean by the types like me” Martin said indignantly. “I’m not saying you did anything bad to her but you are now the hot and popular girl. We both know how most of them are acting in this school” Scott said in his defense. “No need to remind me, it’s enough i see me reflection” Martin sighed and sat down. “So when are we going to continue our work together?” Martin asked. “I though you didn’t want to work with me” Scott was surprised. “We are friends aren’t we? No matter what comes we need to stick together” Martin took Scott’s hand. “I may not help you with the calculations but i can at least ease your work” Martin said. “How?” Scott asked. “Well i make great sandwiches, and it’s much better to work with your stomach full”. “Sure it is” They both laughed. “Come on Scott. Let’s head to the classroom”

They went towards the exit talking about their plan of going back. “Did you say time travel?” They heard a girl’s voice just before they were about to leave.The girl, Martin knew her name was Jenny, rushed in between them pushing Martin so hard he hit the wall. “Are you a traveler? Maybe you’re building a machine? I would love to build one. Or you’re just a fan? What is your favorite book?” Jenny kept talking nineteen to the dozen. “What the hell” Martin rubbed his sore shoulder. Scott was silent as Jenny flooded him with questions. “Excuse me. We were in the middle of a conversation” Martin patted Jenny on the back. “Yeah, sure” Jenny ignored him. Martin opened his mouth in shock.”Ekhm!” He tried to remind her he’s still behind her. “Caught a cold blondie?” Jenny asked. “Let’s go somewhere else” She took Scott by shoulder. Scott looked at Martin who stood behind Jenny, with his arms crossed and a sour look on his face. “I’ll… Just go… for a bit” Scott didn’t want to leave Martin but Jenny already dragged him. “See you later Laura” Scott was forced out of the libary. Martin was dumbfounded. “Son of a…” In the last moment Martin covered his mouth to restrain himself from cursing aloud in the school libary. It didn’t change much, he already drawn attention of all the students. Martin just smiled and left the libary in hurry 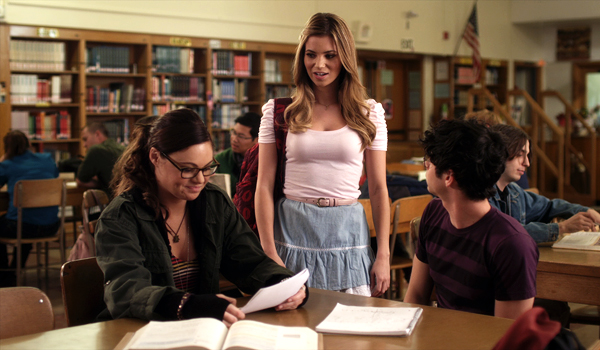