roommate had enough (my name is Lolli Pop pt. 1)

“This… this isn’t possible…” Doug pleaded, her scared, pretty eyes widening even more when she heard the sound of her words spoken in a breathy, scared, female voice.

“Yes it is” Trevor said. “I spent a lot of time and energy to find this magic remote, and you were the first person that I thought of when it came time to test. You never have rent on time, you use all my stuff and never put it back, you come back here at all hours of the night with your endless parade of girls, never even trying to keep it down even though you know I have to work early… and then, on top of all that, the one time I hook up with a girl I actually like, the second I turn my back, you try and steal her from me!”

“It… it wasn’t like that…” Doug pleaded again, staring in horror at her naked body, her soft hands running over his fleshy legs, between them, feeling the soft mound where until minutes ago, when she was still Doug, the 25 year old MAN Doug had been her entire life knew her cock should be. She searched a little more, not able to make herself look, and then felt a shiver as her fingers brushed the opening to… to.. a vagina. A whimper escaped her soft, full lips and tears welled up in her eyes.

“What did you think you’d still have that? No way… you’re all girl now. In fact, I just copied that chic you brought home last week, and pasted her onto you… with a few tweaks.” Trevor smiled and fiddled the controls. Doug was indeed the spitting image of the cute, athletic chick Doug had brought home from the bar one night last week, as he stared down he remembered her cute, high little breasts with their puffy nipples, and could not believe they were his… her… her tits. Her mind was having weird identification problems, as Doug began to think of herself more and more as a women, no matter how she tried to resist.

“What was her name again Doug? Buffy? Brandi?” Trevor asked, not recalling but clearly remembering the non stop sounds of her moans and groans, the slamming and pounding of the bed and couch hitting the walls, and the occasional exclamations and cries of “oh god fuck me harder” or “Please just pound my pussy!” as they screwed and kept him up half the night, not getting back to sleep until just a few minutes before the alarm clock went off at 6 am for work.

“Oooh I like it! Now, let’s give you a little bit of edge…” Another hit of the remote. Doug yelped as she felt sudden intense burning sensations all across his her body, as tattoos appeared down her arms, her sides, her entire back… her legs were covered, including tattood on garter belts and stocking.

“No! Please… I’ll do anything just… change me back..” She pleaded, tears running down her face.

“Oh come on, I know you never like the punk, tattoo girl thing, but I always do, and since I’m coming up with your look…. “He smiled again and aimed the remote. Doug’s long, blonde, sun dyed hair suddenly began to writhe, teasing itself up, until it stood on her head, wildly falling around her pretty face, tangles and teased sections hanging in clumps. Her hand reached up and touched it, just as the blonde color faded to a bleached white, and then hot pink streaks began to appear, until her hair was a wild, teased mane of pink and white, almost like some kind of cotton candy. Another push and jewelry began to appear, Doug wincing and yelping in her girlish voice as her ears became lined with studs and barbells. Her nose suddenly had two rings through it. Chains and bracelets appeared around her neck and wrists. She cried out with a yelp as a sharp pain shot through her tongue and between her legs at the same time, and, as she opened her mouth and a clicking metal sound greeted her, realized she had a huge barbell piercing through her tongue, and, a small hoop pierced directly through her pink, puffy clit.

“Stop this Trevor, you can’t do this to me! I… look ridiculous. I’m supposed to be a guy!” She said, pleading, tears now falling down her face.

“Fuck your not making this fun.” He typed in a command, so that Doug would do anything he said if he started the sentence with Trevor says.

“Trevor says no more crying.” Doug’s tears and whimpering stopped dead.
“Trevor says stand up and face that mirror.” Doug did just that, eyes not believing the
curvy, heavily tattooed girl looking back was him.

“Ok… lets make you a little more my style… I know you dig the athletic thing but, I like some curves!” Trevor laughed and watched as Doug turned sideways in front of the mirror, watching as her hips began to widen, her body swelling out in all the right places to give her serious curves, soft thighs leading into a big, round, fat ass, muscle tone that the girl Doug had brought home had from obvious endless work outs leaving, as soft, weak pale flesh replaced it, leaving Doug far weaker feeling and, considering how her hips, ass and thighs jiggled, far more awkward.

“Now I think were done!” Trevor said with a grin, watching as Doug ran his hands over her butt cheeks, slowly squeezing them, as if to try and convince herself they were not really there.

“Trevor… you can’t do this. You can’t leave me, as… this” she gestured down at her nude body. “This… I look like some kind of punk rock freak!”

“Hmmm, I think maybe your right, something is not exactly there… oh shit! how could I forget the most important change I wanted to make! Those tits are just not gonna cut it for me… especially with that ass, we gotta make you nice and stacked” He aimed the remote.

“No!!!! Please!!!” Doug begged, dropping to her knees, hands flying up and covering her
small, high breasts as if to protect them from more changes. An intense tingling covered her entire chest, and she raised her hands to her sides. Her back arched and she leaned away, staring down as the tingling increased even more and suddenly her tits began to slowly swell… rising, rounding, swelling in all directions. Nipples and areoles spread out as well, until they were big and pink, but still rode high on her tits. The grew… and grew…
Finaly Doug clutched them and screamed at Trevor.

“Please… don’t do this… just… stop… they feel… huge…” She gasped, hands still raised into the air at her sides, peering down as her breasts continued to inflate.

“Oh come on Doug, let’s see… you’re at about a 34 C… we can do better… let’s try… howabout… 34 triple DDD? That sounds like a lot of fun!” Trevor hit the button and her chest jumped out twice, and then sat jiggling, as she stared down, at the gigantic tits she now possessed, raising her hands, lifting them, feeling some of the strain in her back lessen, these huge boobs were so high and round that they almost looked fake, until you saw how they jiggled. She let them go and almost lost her balance, as they jiggled and shook and her breasts off set her entire sense of balance.

“Ok perfect. Now, here’s whats up. We’re going out tonight, and you’re going to get me a girl to bring home. You’re gonna be my bi-sexual party slut wingman, Doug… wait…”

Doug tried to resist, even trying to put her hand over her mouth but it wouldn’t work, and she suddenly began to rattle off names…”Like… uh… ” giggle “Maybe it’s like a pretty sexy name like Trixie, Candi, Bambi, Debbi, Brandi, Gummi, Happy, Lolli pop” words ran from her mouth completely out of her control, her voice was now so high it sounded like a put on, or a 6 year old girl, and she found suddenly that her tongue ring was forcing her to have a pronounced lisp as well. She bounced a bit as she spoke, causing her huge, bouncy breasts to jiggle up and down with each word.

“I like it! Some nice ideas… Doug, you no longer use that name. That’s not a name for a sexy girl like you… you can’t even remember it now. From now on you’re name is Lolli. Full name is Candace Lolli Poppins, but you also go by Candi Lolli Popps, Lolli Poppins, Candi Pop, and anything else people want to call you. Now, go ahead and say your name…” Trevor smiled, loving to see his former roommate’s will erode as she became trapped into this new, sexy party girl persona.

“My, like name, it’s a silly one for a pretty girl… or a sexy guys name… it’s… a guy… um…” She searched her mind, just not finding the name she new she should have, trying to ignore the one that was right there, with every thought… finally, she had it.. maybe.. Dull? Something,,,

“It’s Lolli Pop. Candace Lolli Poppins.” Her voice sounded like a cartoon, and she winced thinking of living with that as a name.

“Perfect. Ok, you’re going to go to your room, where you’ll find all your clothes now fit you’re new body, and I want you to get dressed in something that shows off a lot of skin, especially those huge milkbags, touch up that make up, and then, we’re going to the dirty devil to go dancing!”

As Lolli squeezed into a tiny pink mini skirt, a bullet belt, ripped up fishnets, high heel boots that were so drastic they forced her ass to stick out like an advertisement for getting fucked, and a hot pink, low cut bra that barely contained her boobs, and then a tiny, black vest that barely went around her shoulders, did nothing to cover her tits, and left her stomach and lower back totally bare. Her hot pink streaks in her hair no matched her bra and skirt, and she found herself suddenly compelled to put hot pink eyeshadow and lipstick on as well. Looking at herself in the mirror, she sighed heavily and wished she could put on more clothes, but her body just wouldn’t, instead simply adjusted her tits in her bra and winked into the mirror, before turning and heading back to get in the car, the male mind trapped inside the sexpot body horrified at the thought of looking like this and having to jiggle her way around the dirty devil, the biggest meat market club in town. She would have to figure out a way to gain as much control as possible, or else, she thought, I’ll be fucked… literally. 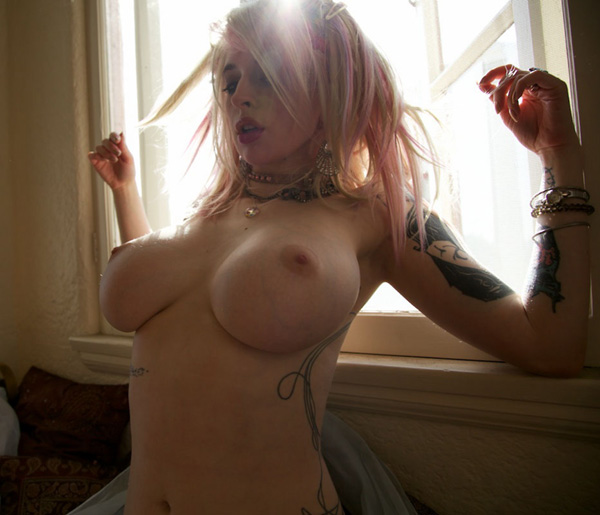