“Au revoir Monsieur!” I squeaked to the man leaving his hotel room. He ignored me save for a brief glance and a knowing smile. I curtsied to him as he turned a corner, leaving the hotel, probably forever. *Chase after him! Go!* I thought in a panick, but outwardly I simply smiled, turned on the vacuum cleaner and continued cleaning. I was once that man, a successful man with a life and a future. I couldn’t accept that I’d been reduced to a bubbly french maid, but I had no choice.

This hotel wasn’t particularly special save for one thing- it were staffed by sexy women, which of course included the classic french maid. That’s the only reason I decided to shell out the extra $300 a night. French maid’s dotted the halls and cleaned the rooms, japanese lolis delivered room service, they were all giggly and accommodating and all wore very alluring outfits. But there was one thing I was warned about before I came. Guests were NOT permitted to touch any of the girls, regardless if they’d been invited to or not. I was told that if I broke this rule, I’d pay for it.

I thought they would charge me more money, or kick me out… maybe even call the cops. I had no clue the reality.

I had come back to the hotel one night from a bar, and I was very drunk. I decided to get a few more drinks at the hotel bar. There at the bar, a few seats down, sat one of the maid’s I’d seen earlier on my floor. I struck up a conversation with her and she seemed more than delighted to talk to me, and I was delighted by her adorable accent. After a few more drinks I slipped her a piece of paper with my room number on it. I didn’t want either of us getting caught.

I headed back to my room and took my shoes off, and not five minutes passed before I heard a soft knock. Looking through the peephole I saw the maid from the bar, her name Angelica. I opened the door and ushered her in. The room was quiet as we looked at each other for a few moments until I went in for a kiss.

As soon as our lips touched I could feel that something was different. I opened my eyes and saw myself, slowly pulling away from my face with a satisfied look.
“You’re not supposed to touch the girls, and kissing is definitely out of the question.” My body said. I looked down to see blonde locks, a protruding chest and that I was wearing a black and white dress. I realized immediately that the maid and I had switched placed. My hand shot to my mouth as a breathy gasp escaped.

“‘Ow deed thees ‘appen??” I asked, hearing the maid’s sweet voice come out of my mouth, accent and all.
“You kissed me, you’re not supposed to do that.”
“No, you ave to do sometheeng!”
“I’m not doing a thing, darling. I’ve been stuck in that body for a year waiting for a charming guy like you to get grabby. Most aren’t stupid enough to disregard the signs… well… I guess I was, but that’s in the past now.”
“You can not do thees! I will phone le police!” I insisted, my girly voice dripping with panic.
“I don’t think that’s right, because once I say your name you won’t be able to do anything but act the part of the pretty little maid like I had to. Ready for your new role, Angelica?”

At that the tension I had broke and my muscles all relaxed. A smile grew on my pink lips.
“Oui monsieur! Ees there anytheeng else I can do for you? I ave a lot of work to do.”

“No Angelica, you can go. I need some sleep, I have a flight tomorrow.” He said winking, knowing that it was still me, trapped on the inside. “Oh, Angelica. You look very pretty in that dress.”
“Merci monsieur!” I said, blowing a kiss. He opened the door for me and I walked expertly in my heels out of the room. The rest of the night I spent cleaning all around the hotel, smiling the entire time.

Now there goes my old body and my old life, while I can only watch it leave. My only hope is that some guy would touch me someday. Until then I was Angelica. 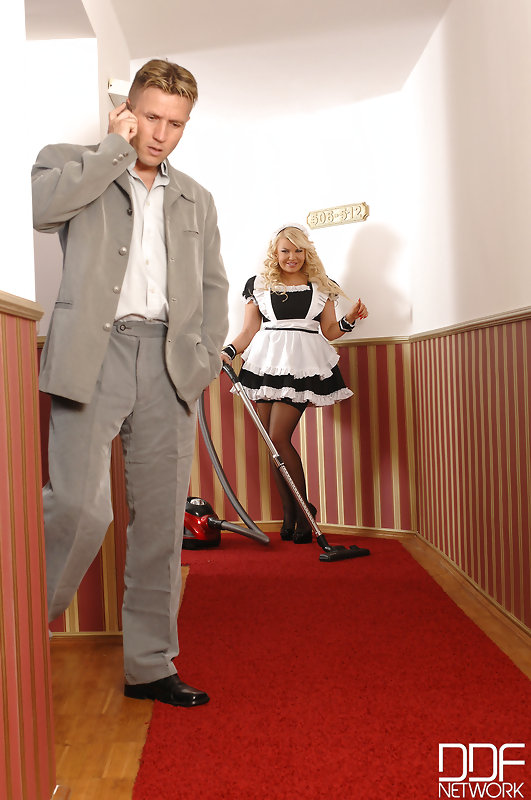