Genie looked surprised when she read the next wish, “Hello genie, I’m Ewaryst and I want to become a succesfull scientist”. This were to be the first time she had transformed someone’s life into the life of a scientist. She even had to look up the word Scientist, “So he is interested in science” she whispered, “but science contradicts magic” she added. Genie then realized what she had to do, “he will be bound to science like he asked, but i’ll have to add a little magic to his life. Wish granted” Genie said and exploded into a cloud of pink smoke.

Ewaryst was talking to one of his friends on the phone, when he saw some smoke coming out of the phone’s screen. He dropped the phone “what the …?” he said. He tried to run, but the smoke took the shape of a big pink hand, grabbed him by his arm, and pulled him inside the phone. He was being transported into a different part of the world.

Ewaryst then was thrown out from a different phone. He was now dressed in a white coat, and he could feel the glasses he was now wearing. He knew his wish had finally been fullfilled. “But a lab coat? how cliche” he said. His voice sounded a little bit off, so he tried clearing his throath. “Ok, what I am working on?” he said trying to use a lower voice. On his desk, were some chemical formulas written on his own letter. He smiled. He was so excited about his new life, that he had not even noticed the changes on his body. And it wasn’t until his phone rang that he realized what had happened. He answered the phone and heard a child’s voice “Mom! when you come home can you buy me some stuff I need for work”. She felt surprised, but she wasn’t upset, she was happy to have a son. “Sure honey” she said.

Later that day, she met her coworkers. And learned her name is Elsa. Little by little she remembered her new life. “A single mother?” she whispered when she tried to remember her husband’s name to no avail. “Elsa, you need some help?” One of her fellow scientist asked. She turned around a stroke a sexy pose. “You know what I want” she said.

It wasn’t easy being the only female scientist at her lab. But at least this is where she met Trevor. They aren’t dating or anything yet, but they do like to flirt constantly. And what is Elsa working on? well, she’s working in a special pill that uses nano particles to alters a person dna. It is kind of like magic, someone takes the pill, and becomes a whole different person. 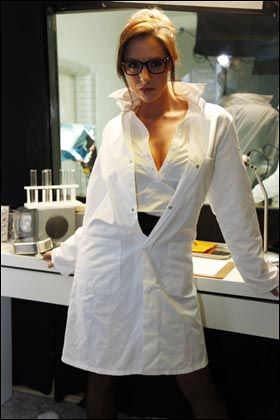