Eyeing the Asshole at the Restaurant

Brent wondered why the guy this blonde was arguing with at the restaurant looked attractive to him?! He never had a gay thought in his life, but for some reason, as the blonde chucked her drink into that man’s face, she was attracted to HIM… a guy! He then wondered why his body and clothing felt different too, then looked down at himself in shock!

He had the body of a curvy pale skinned woman in a tight short jean skirt, black heels, and a silky gray top. His hair felt longer, and as he pulled a strand into his vision, it was red. He couldn’t believe how different and strange he felt, but also turned on? His underarms were starting to perspire and his tiny pale feet were sweating, tight in his black heels. His bra was getting hot too, hugging his new twin weights. He was getting hot and bothered about that guy, who was apparently was an asshole to his girlfriend.

Ned said, “My girlfriend just doesn’t understand me, but you do, what’s your name again baby?”

Brent took his mouth off of Ned’s huge cock to reply, “Call me Brenda baby!”

“Looks like I traded in a blonde for a redhead then Brenda. Now get back to sucking,” said Ned already getting demanding with his new fling.

The new Brenda was so horny and turned on by this bad guy, she went back to work, sucking HER new man dry! Meanwhile, the blonde chick Ned was with, Nadia, smiled, her spell worked its charm, taking this dominating overbearing asshole off her hands and giving him to another former asshole, Brent. Nadia knew Brent, but Brent didn’t know her. She knew him because he’s the one that had sex with her cousin Bethany last month, and then dumped her the day after! Now she thought it justice served, two assholes together, and she hoped Ned would treat the new Brenda like he did her, a piece of ass only nothing more! Brenda would learn how it is on the other side, when she is the one used and abused. 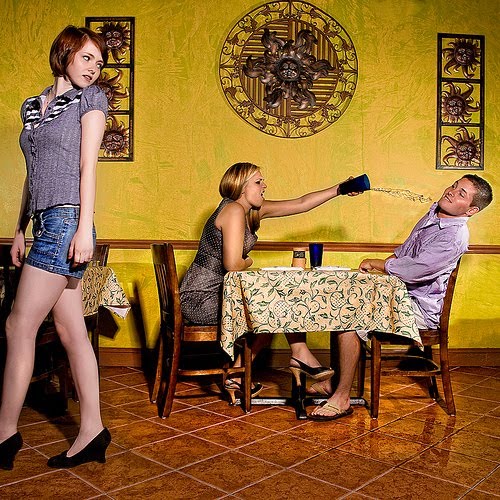