The last thing I remembered was the crash I was driving fast trying to get out of town after it had become overrun with the bimbo virus. I had just watched my best-friends turn right before my eyes, I was alone and scared and emotional I took the first car I could find and left town as fast as I could until I hit the pothole. The car flipped into the air and came to rest in front of an old college as I blacked out I saw a group of women running over having just seen the crash.

When I came to I was lying on a white bed still groggy with a woman standing over me. “Oh good you’re finally awake” she said in a caring tone.
“Where am I-” I started to say before I was overcome with a splitting headache.
“you’re safe now don’t worry we’ll take care of you” she said as she feed me a pain killer to help with my head “That was quite the wreck you were in it’s a miracle you’re alive”
“We?” I asked the pain in my head starting to fade and making it slightly if barely easier to think
“Yes we, silly this is a nursing college don’t worry there of plenty of girls here to help take of you” she said smiling
The comment about about there being plenty of girls here started setting of alarm bells in my head.

“Well if it’s all the same to you miss-” I started to say.
“Oh you can just call me Emily, we’re not that formal here in fact we’re all very friendly” she said with a great big smile.
“That’s fantastic and I would hate to intrude on that fantastic group dynamic you girls have going on here so I should be going  thanks for-” I started to say
“Oh don’t be so quick to leave you’re still too hurt to walk very far, but don’t worry Veronica is on the way up stairs right now to help you feel better, and don’t worry you’ll fit in just fine, Delilah” She said still smiling. I tried to get up but my body was in to much pain to move Emily then took the liberty of taking off what was left of my tattered clothes, and quickly followed suit and striped herself. Then in a shift motion positioned her self behind me on the bed holding me.

“shh, it will be ok look at how hurt your body is there’s no point in trying to run, Veronica will be here to help me make you better” she said trying to comfort me. Then the door opened and in walked who I assumed was Veronica she wore the same comforting smile. It was as if they thought they we’re helping me and wanted to put me at ease.
“Please don’t do this I know you two think you’re helping me but I don’t want to be one of you, please don’t infect me” I begged. Emily then wrapped her arms around my neck and said kindly “But we are helping you silly why wouldn’t you want to be a pretty little slut like us and our other sisters”.
“She’s right, would you rather spend your last days alone or here with us you’re new sisters” Veronica said as she placed her self at the front of the bed, in front of me.
“Me and Veronica here were both born women so the change was not as drastic for us but of he men we’ve helped none of complained yet in fact they prefer their new lives ” Emily continued

With that Veronica spread my legs and started to suck my dick which despite everything had no problem rising to attention . I could only groan as Veronica expertly sucked my dick and the virus entered my body. All the while Emily would whisper words of encouragement in my ear “you’re doing great, you might be resisting now but you’ll see how much happier you’ll be when we’re done. Once you have your last male orgasim, then the real change starts”

It wasn’t long after that I came in Veronica’s mouth I let out an audible groan which was then followed by the sound of Veronica swallowing my load. “That’s it it won’t be long now” Emily said in me my ear “just lay back and let it happen don’t fight it, you’re one of us now Delilah” Emily finished
“I’m not one of you and my name’s not D-” my voice started to trail off as the changes started and Veronica sat up right in front of me on her knees watching and waiting.

My body started to shake and take on the the shape of a healthy girl in her twenties. Not long after my face started to feel strange like it was rearranging. “you have such a pretty face I can’t wait for you to see it” Emily chirped cheerfully.
This was followed by a strange pulling sensation as my penis pulled into my body and was replaced by a functional Vagina, my chest quickly followed as I felt two nicely sized breasts grow

At this point I was panting the whole experience was exhausting yet extremely arousing, my mind quickly started to fill with new thoughts of how I love being a girl, my new sisters and of course sex. I started to repress these new thoughts when Emily grabbed my left breast, I let out a slight moan and felt my mental resistance weaken slightly “wow you turned out great, now it’s time for you to embrace the new you. It’s just us girls now you don’t have to act tough” Emily said trying to put me at ease
She then looked a Veronica “Veronica would you like to help her embrace her new self?” Emily said giggling.
“Gladly  don’t worry  Delilah you’ll really like this part” Veronica responded.
“My name’s not Delilah” I said still trying to fight my new thoughts.
“But it will be soon, just give in it’s ok you’re one of us now” Emily said as Veronica started to eat out my new pussy.
Waves of pleasure started to overtake me as Emily expertly fondled my breasts and Veronica licked my clit like a pro. My new thoughts become stronger and stronger I didn’t know how much longer I could resist.
“shh don’t fight it just let go, let us help you” Emily said in my ear to comfort me
“please I don’t want this I don’t-” I barely managing to speak over my involuntary moans when my first orgasim took me. My brain felt like it was on fire my resistance  almost breaking.
“There we go one orgasim down one more to go and you’ll be one of us. So why keep resisting just let go Delilah you’ll be happier I can see it in your eye’s you want this, Just stop fighting it, let go” Emily said softly in my ear in her same comforting voice.
“Please I don’t want this, please don’t make me come again and my name is–” Then the second orgasim took me this time there was nothing I could do as it washed over me, my resistance was broken they had finally won I was one of them now.
“My name is Delilah, my name is Delilah” I said in between moans of pleasure as I embraced the new me.
“Doesn’t it fell better to just give in, to accept who you are” Emily said with a mix comfort and satisfaction in her voice
“Yes! Yes! but don’t stop I need more!” my pussy walls still twitching from the last orgasim.
“gladly” said Emily with a smirk as she continued to play with my left breast and I started to play with my right one. It wasn’t long until I came again this time as active participant in my own pleasure as I played with my breasts. I loved what I had become and was so happy my sisters had taken the time to let me join them.
“That was amazing I panted out of breath” after a few more orgasims “I can’t believe I resisted that was so silly” I giggled
“Welcome to the sisterhood Delilah” Emily and Veronica giggled together in unison
“Thanks girls” I giggled backed
“Delilah we have another patient down stairs would you like to help Veronica? help him” Emily asked smiling
“Absolutely I would” I said as I liked my lips with anticipation. 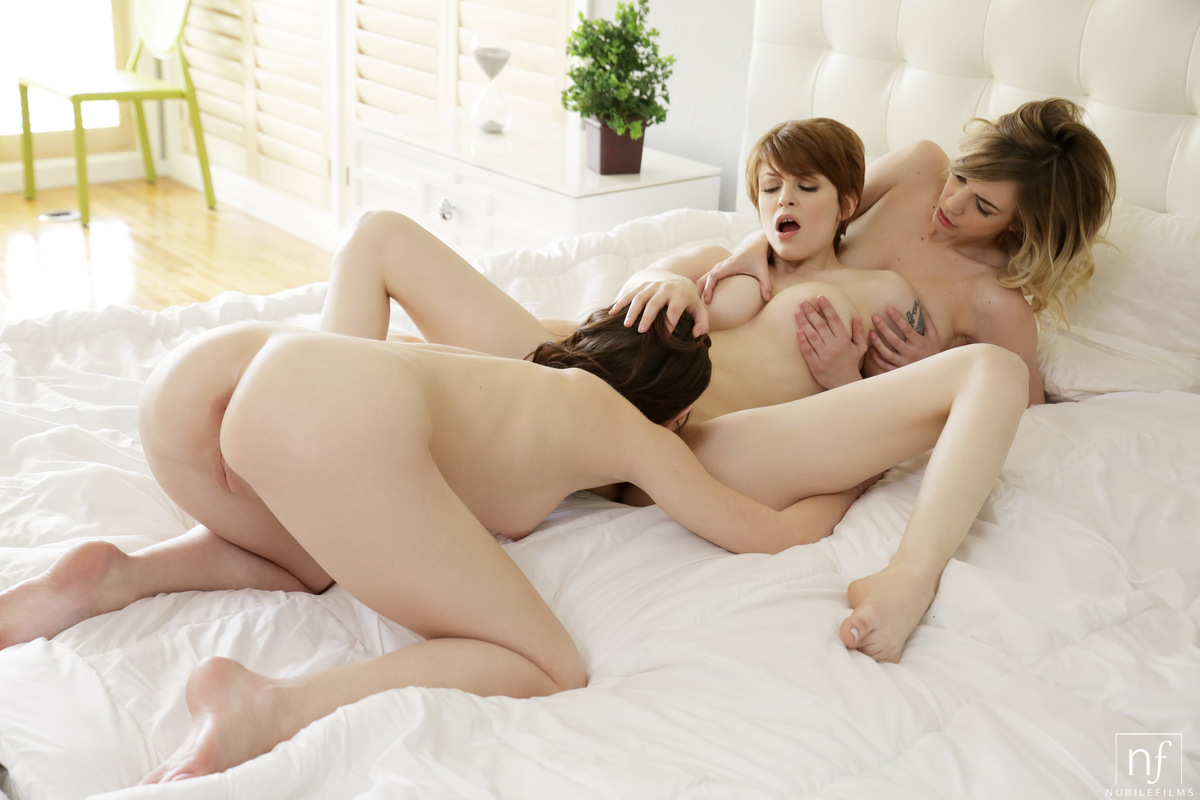