As it turns out, there are many things passed down through blood other than genetics. If one’s family was the disrespectful sort (especially when it came to spurned deities) one might incur wrath of some long forgotten god and have a blood curse placed upon one’s entire bloodline. When Richard Mann accidentally desecrated an ancient Inuit burial ground, for example, he doomed every second son in his bloodline to a curse from the rain goddess Asiaq. Since it was manly pride that led to Mann’s callous disregard for the dead, it was manhood that Asiaq would take from him: whenever rain touched the cursed one’s skin, he would become a woman until rain touched it once again.

Mann took precautions to ensure that none of his kin should suffer such an embarrassing fate as he. He forbade his offspring from having more than one child so that the curse would die out and the Mann name would be preserved with honor. However, as the years passed and the reasons for doing so were slowly forgotten (perhaps out of shame), these strict rules fell out of fashion within the family, and it was only through sheer luck that a second son was not born until Maxwell Mann was born..

Maxwell had the unfortunate fate of being the first second son in the Mann bloodline since Richard himself. The fact that the family now took up residence in Arizona made this non-problematic for much of Max’s early life. However, this was bound to change eventually. One dreary March day on his way to elementary school, he got caught in a rainstorm for the first time. That day, when he went to use the restroom, he was shocked to discover his penis had suddenly disappeared, leaving behind a tiny vagina.

Over the next few months, Max began to understand more and more of his condition. As a child the changes were easier to hide. However, as he began to grow and develop as both a man and a woman, things became far more complicated. He took to bundling himself up in as many layers of clothing as possible during rainstorms to avoid skin-to-water contact, and made sure to stay indoors whenever possible, only going outside in emergencies. Through some miracle of careful planning and sheer luck, he managed to make it all the way through high school without his curse manifesting itself.

Things changed, however, when Max moved away to make a living of his own. One night on his way back from work, he was caught in a freak rainstorm and changed into a woman without any protective covering. Finally arriving at his apartment and removing his wet clothes, he caught a glimpse of himself in the mirror. It was a truly eye-opening moment. He finally realized just how gorgeous he was as a woman: a thin, toned tummy; an ample, firm ass; two large, supple breasts–he was the kind of girl men his age fantasized about. Staring at himself in the mirror, Max masturbated for the first time as a woman, and found it to be more pleasurable than he might have expected.

He lived the next few months of his life in anticipation of the next the next big storm. He purchased new outfits and accessories for himself, even indulging in the acquisition of some vibrators just in case his fingers couldn’t do the job anymore. He fantasized about what it would feel like to have something inside him again. Disconcertingly, one of these imagined objects was a penis. Max tried to shake the thoughts, but they kept returning stronger than ever.

Such an obsession complicated his work life, too. He found himself staring at male coworkers, imagining how big their penises were, how well they would fill his tiny, tight vagina. He wondered how they looked naked, what their faces would look like when they orgasmed, how it would feel if they pressed up against him. With burgeoning horror, Max realized what was happening to him: he was becoming attracted to men.

After a few more days, Max couldn’t take it anymore. He tracked a storm system moving several miles to the north, got in his car, and drove out there himself. He stepped out of the car and into the rain in a state of total elation, sexual ecstasy washing over him as he felt his waist curve inward, his hips and ass curve outward, and two large breasts sprout on his chest. With a delighted moan, he felt his penis slide upward into his body, leaving behind the little pussy he loved so very much. He was a woman again. This was right.

Picking up men came naturally to Max. She knew how to talk, how to move, how to send the right signals–she didn’t just feel good as a woman; she was good as a woman. It wasn’t long before she had her pick of the whole joint. She eventually settled on a young, studly cowboy with a promising bulge visible through his jeans. Max practically salivated thinking about it.

As soon as Max crossed the threshold of her motel, she whipped off her chosen partner’s clothes. With a surprising amount of glee, she found him to be thickly muscled and more than a little well-endowed, a thick, veiny cock already erect in anticipation of the evening to come. Perhaps even more pleasing was the pleasure her partner took in watching her undress, hungry eyes scanning her sultry hills and valleys will unbridled lust. He really was just as aroused as Max was.

The cowboy seized Max and pressed his lips against hers, worming his warm tongue into her mouth with lusty abandon. Max was too far gone to protest–she fully reciprocated, throwing her arms around the cowboy and grinding her feminine pelvis against his. The cowboy’s hands ran up and down Max’s body, fingers touching places Max had been unable to reach before. She moaned and shivered with pleasure as she felt the contours of her body caressed and probed, her vagina beginning to leak sticky fluid. She couldn’t wait much longer.

Thankfully, the cowboy felt the same. Tossing Max onto the bed, he roughly pulled her legs apart and gripped his cock in one hand, preparing for entry. Max steeled herself as she felt the tip of his penis press against her vagina, and, with a lusty grunt, he finally pushed himself through, his cock penetrating and sinking deep into her. She let out a loud gasp. The sensation was absolutely immaculate; even better than she ever imagined. She felt herself clamp down on his penis, wrapping it in warm, pulsing flesh as it slid in and out, in and out, waves of pleasure coursing up and down her body. She moaned and grinned as the cowboy slammed into her again and again, her hips moving in unison to further enhance the sensation. The pleasure she felt was beyond anything she could’ve hoped for. She wanted it every day for the rest of her life.

The sensation did not fade, but only increased as the cowboy fucked her faster and faster, pushing deeper and deeper into her pussy. Max felt a stirring inside of him, like he was about to explode into a million tiny pieces. “More!” he shouted. The cowboy obliged, and Max continued to climb the hill, letting out tiny, pleasured gasps as he thrust harder and harder. Finally, Max could hold on no more. He let forth a yell as euphoria exploded inside him, and the cowboy did the same. Through the fog of pure ecstasy Max felt her fluids and his warmly mixing deep in his vagina–they had both cum together. The cowboy collapsed on top of her, his warm, sweaty body heaving as they panted and moaned together.

Over the next several weeks, Max cut ties. As a man he quit his job and carefully ended relationships with his family and friends, insisting they did not try to follow him. He moved up to the Pacific Northwest (the rainiest area of the country) and found work there–as a man he worked in retail, as a woman he was an exotic dancer. While Max would’ve liked to remain a woman the whole time, the issue of conception became an issue. He found an effective way of rendering his partner’s sperm useless was transforming back into a man–no worries of unwanted pregnancy. He could live his life any way he wanted.

As Max embraced life as a woman, nights of sex and pleasure becoming the norm, a forgotten goddess looked down on the strange life she had wrought with a wry eye. She might’ve known this would happen–if one doesn’t know any better, a punishment could easily become a pleasure. Feeling an odd sort of affection for the man/woman she had helped create, Asiaq made sure to send a little rainfall Max’s way whenever he/she needed it. After all, what’s the harm in a little pleasure? 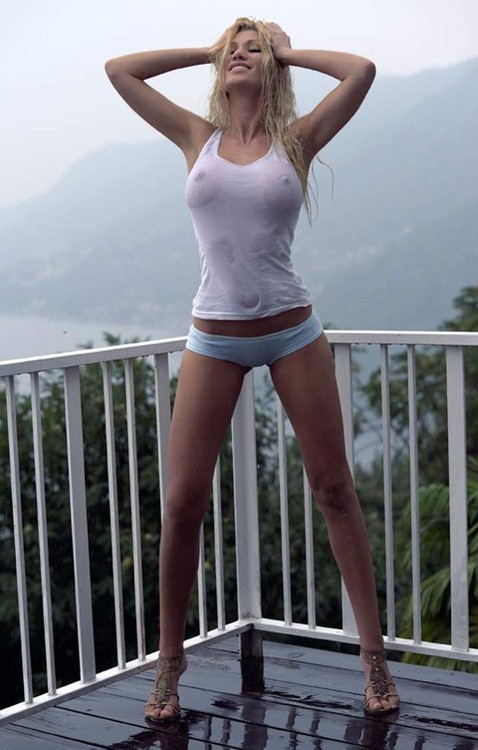