Two and a Half Months part 3

After forcing himself into a pair of jeans (mom jeans of course), a t-shirt and some running shoes, and washed off his makeup, Ralph didn’t know what to do with himself. He was still riled up by his sister mocking him for looking at her manly body.

“It’s the stupid spell.” He said under his breath. “It’s not like I want to look at her muscles. I can’t help it. Not when she’s got those strong, hairy arms or that hard little butt. Wait. NO. EW.” He said, disgusted with himself and what just came out of his mouth. “I need to find something to distract me.” He resolved.

Usually in this situation he’d just play a video game, but all of his games were locked in his bedroom with the rest of his life. He tried to distract himself with television, but quickly found that nothing was sparking his interest. All he could think about was the shitty situation he was enduring. Instead of having a great summer as a young man, he was stuck as his mother, a woman. He didn’t even realize what he’d gotten dressed in this morning, from a lowxut dress to heels to makeup to jewelry, until it was pointed out to him. Only when he really focused on it could he bring himself to wear something that wasn’t completely feminine. Picking out his clothes he found his eyes and interest just naturally darting to the dresses and skirts and heels that he thought would look cute.

He knew it was going to be a struggle, but if the magic was telling him to do stuff, he’d do his best to fight it. Otherwise, Jennifer would mock him endlessly.
As much as he didn’t like what his body was making him do, he hated his body itself. First was the totally unappealing nature of using the bathroom as his mom and showering. In the three days he’s been in her body, he’s touched places he never wanted to think about her even having. Then was the way this body moved. His chest heaved and bounced around whenever he turned or bent over or stood up or frankly ANYTHING. His ass and hips made walking feel weird however he tried to move. His small, thin stature and sweet voice made him feel week and almost powerless, especially next to his sister’s broad, tall figure from within their dad’s body. Finally, the void between his legs was a constant reminder of what he’d lost, and how fucked up this all was.

“Screw them. If she’s going to stick me in her body, I’m going to play my Xbox. What’s she going to do about it?” Ralph thought as he stood up from the couch and marched to his bedroom door, which was locked. After retrieving a bobbi pin from his mother’s makeup table, he returned and managed to get the door open.

Immediately an intense headache came upon him along with a loud ringing. His hand shot to his temple and he closed the door as soon as he could manage it. When he did, he found the headache and the ringing went away, and a note had appeared on the door.

“We told you not to go in there, now face the consequences. Welcome to level two of the punishment. Enjoy!” Read the note.

“What the heck?” Ralph puzzled to himself. Just then he felt intensely hot in his clothes. He didn’t understand what was going on but he was starting to feel lightheaded. He rushed to his parent’s bedroom and in a panc stripped off all of his clothes. He felt much better. Laying on the bed he tried to reason what was happening.

“What the hell is level two? What’s wrong with my clothes? Shit, mom and dad must have had some magical lock or something on my door, and I tripped it. I bet that’s what happened with my clothes. Well, I can’t spend the summer naked.” He thought to himself as he stood up from the bed and approached his mom’s closet. He opened it and looked over the many varied garments.
“There’s probably something in here the spell wants me to- Oh wow, this blouse is gorgeous, and would go great with these shoes.” He said outloud, interrupting his train of thought. He grabbed both the gold lace blouse and the matching high heeled shoes. “Wait, what the hell did I just say?” He said as he slipped the shoes on his feet. “Uh oh, shit. I’m wearing heels again!” He said to himself, as he walked to the dresser and opened the underwear drawer, causally picking out a set of stockings, a garter belt, and a matching black bra.

He sat on the bed and slipped the shoes off. “No way. No heels.” He said to himself as he began to roll the stockings up his legs. “What am I doing? Oh crap. This is level two I bet.” He said as he continued to dress himself. Each choice he made seemd to go by instinct, and he was happy to find that these clothes didn’t burn as much. His body seemed to be two steps ahead of him. Every time he realized he’d just put stockings on, he was already stepping into his heels. When he realized he’d put a bra on, it wasn’t until he was doing his makeup in the mirror.

“Okay.” He calmly said to himself as he meticulously did his eye shadow. “I think I fucked up. The feeling I’m getting to act like mom is really becoming strong, and I barely realize I’m doing it until after I do it.” He said, picking up a thong and sliding into it. “Like for instance, I just put on a thong. This is too trippy.” Ralph knew this new level two thing would cause him trouble going forward, but felt pretty powerless against it. Seeing himself primp and preen in the mirror cemented that he no longer simply looked like a woman, now he was acting just like one. 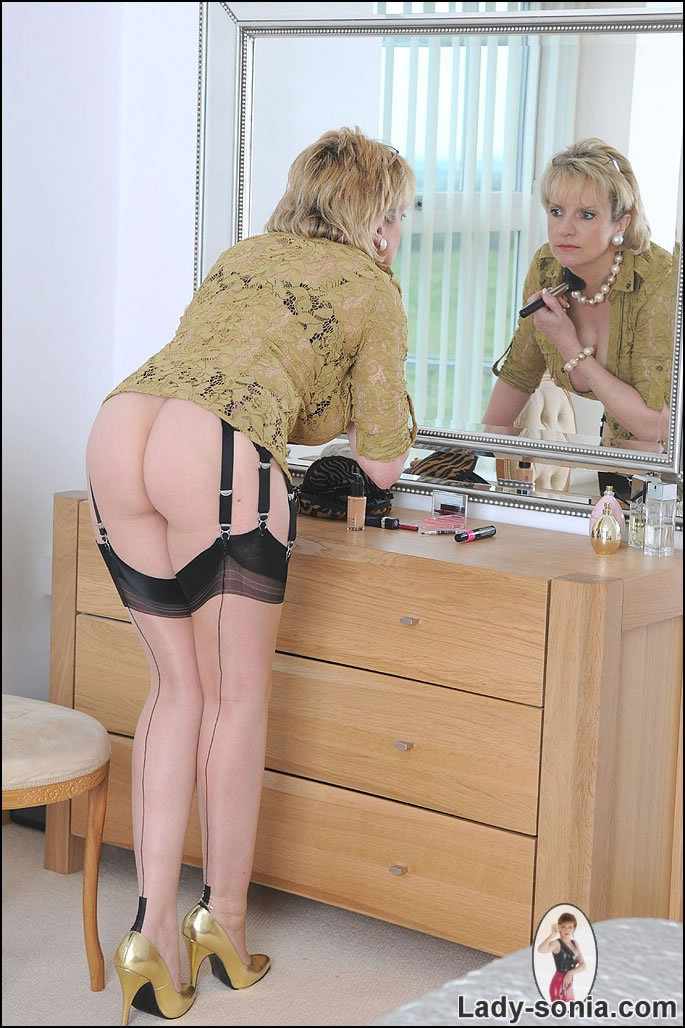