Time and Space for the Human Race

Trevor invented a time traveling device, and wanted to see the future more than the past. It was incorporated into a pink bracelet, to honor his lost girlfriend, as it was her bracelet before she died. She had wanted to see the future with him, but now he was alone, and was not overly fond of the present he lived in. Global warming, war, terrorism, hunger, homelessness, poverty and despair were some of the many things plaguing his century. He traveled into the future in her honor, wearing her pink bracelet on his right wrist.

When he arrived however, he was in for a shocker. Humanity had been all but wiped out, and Earth was a desolate wasteland, brought on by first war, then disease, then starvation. Earth was not a paradise like he had hoped, but more like the dead desert like planet Mars. He thought it ironic that humans in his time were attempting to go to a place much like Earth had become, to go to Mars, when perhaps they should have been looking into more pressing matters first, then reach out to the stars. Then it occurred to him, he had a time travel device with him, why not go back to some point and change things. Going to the past he wanted to avoid might be the key to the future he wanted to live in.

Having some knowledge of history, he traveled to 48BC slightly before Julius Caesar would “accidentally” destroy the Library of Alexandria. Thereby, with him distracting Caesar long enough with his technology, he would keep the Library of Alexandria intact for future generations to benefit. Ideas, discoveries, inventions, would all be available, ones that were lost in this tragic event.

When Trevor succeeded in delaying Caesar enough to prevent the “accidental” destruction of the library, he traveled back to his own era, to see if perhaps even his era was a paradise now, not even having to go to a distant future place at all. When he arrived he was in for some surprises however. First his room was more femininely decorated, he even had pink sheets on his bed, and a purple stuffed animal nearby. That was not the kicker however. He felt different, and the new weights on his chest were immediately noticeable, as well as his empty feeling crotch below. He hefted his breasts in shock, amazed at how it felt to have such big breasts attached to him, and they were so soft. His skin was so soft in fact, and reaching below his new nylon bikini style panties, he found his new folds as well, and how different it felt from his male parts.

Looking over a mirror, he seen himself on his bed, now a beautiful blonde, wearing only the nylon bikini panties, pink fishnet thigh high stockings, and of course the time travel bracelet, with the pink now matching his new body rather well.

Hefting his new breasts with his tiny manicured hands, his new long pink nails tickling his breasts, he said, “Oh my goodness,” only to hear his sweat cute mousey new voice.

He was 100 percent woman now, very feminine in fact. Even his round soft larger bottom against his tiny fishnet stocking clad feet felt so strange now. He put his new hands to his mouth, his lips pouty and full, wearing pink lip gloss that tasted like sweet berries. The bracelet itself was supposed to protect him from changes to the timeline, allowing him to maintain his body and memories, but perhaps the changes were so great, that it was too much for the bracelet, allowing his body to change, but his memories, luckily were still there. After all, his bracelet was a prototype only, there were probably kinks in it that needed sorted out. Being an explorer type personality, however, this “kink” was something of a fascination for Trevor, actually being a real woman, when his entire life before he was a man. He couldn’t get over how soft and hair free his skin and body was now. He didn’t even know how much the estrogen coursing through him now would change his thoughts as well. He had the bracelet still, but he or rather SHE thought, why not explore this new reality, and see if the changes did what she had hoped they would.

She found the new world somewhat similar to her own, however, it seemed as if it was much cleaner, more advanced. She would later find, that in fact, Earth was a paradise, and was way more advanced, there were in fact twelve colonies beyond Earth at that point, and fleets of ships out exploring the galaxy. On Earth, all the problems she left behind were gone, and many were happy citizens so it seemed. But like the shock that the captain had in the movie, “The Planet of the Apes,” Trevor would find all wasn’t as it seemed….

In this future utopia, there were no men. None. Somehow in the past, men were wiped out after some kind of technology was invented that got out of control and killed the entire male population, and no more males were born. She would wonder how then, were there so many people living on Earth still, wouldn’t humanity die out with no men? It turns out technology saved the race as well, using laboratory means to inseminate females to produce offspring with each other’s DNA, of course them being always female offspring. To coin a word, “man” meaning the entire human race, it turned out instead of man inheriting a utopia on Earth, women inherited instead, quite literally, as all 10 billion living on Earth were females, including himself now. That might be why the bracelet did not keep her form, the changes were too much, and there had not been men on Earth for centuries. It did not wipe out any males that would have been born, just allowed them to be born as females instead, like herself now.

Not wanting to change a paradise of peace and prosperity, and quickly realizing her body actually felt wonderful and comfortable in fact, Trevor, whom was actually now named Trina, decided to leave all as it was, and remove the time piece. Once she was even more comfortable and realized Earth was a magical place, she destroyed the time peace with a smile, then posed in the mirror, smiling again, much happier in body and in life, and so was the rest of the world as well.

One more added detail, a knock was on the door of Trina’s new home a few months after her destruction of the time piece. After a year of living in a paradise of beauty, as a beauty herself, she answered her door in shock and happiness. Her girlfriend who had died in the previous timeline was alive and well, and hugged Trina tightly. She said she had been gone on a trip to visit her family on one of the outer colonies, and was back finally.

Gillian, her girlfriend, still her girlfriend it seemed, said then giggled, “Glad to be back on Earth, the higher gravity on Melbourne Prime was making my boobs sag too much.”

Trina replied giggling too, “They are just fine, and you are perfect to me, baby.” 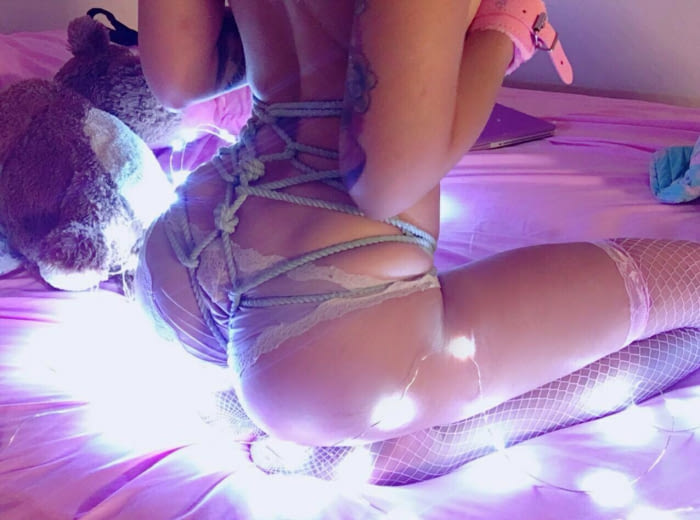