Taken Advantage Of No More

The five chicks by the pool knew they were being taken advantage of, the frat boys on spring break demanded their affections to save their sorority house. The boys had blackmailed the girls into some naughty acts poolside in exchange for them not turning them into the college for all the sorority house violations.

The funny thing was the Great Shift happened to swing on by too. In a fate of rather suiting, all five guys, four of which were being blown at the time, swapped with the girl they were with! Much to their surprise they were grabbing their own penis’s now, some with their mouths around them.

The sorority girls were just as stunned as the guys, but they realized in their new positions, they could demand the sex, as now they were the frat. Jenna, now second guy from the bottom of this picture smiled, realizing how the tables had turned.

In Lenny’s body, Jenna said, “Lenny or should I say Jenna now? You can blow me now or lose your sorority. Ha, ha, ha! If I’m not mistaken we swapped bodies. I’m not sure how or why, but for now you can suck it!” 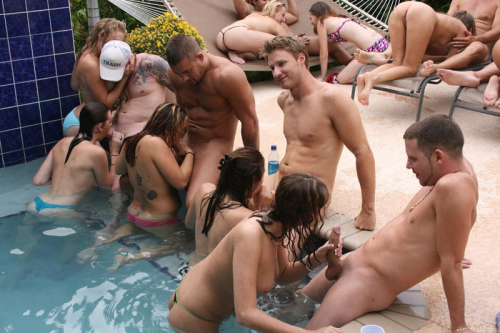