When Jessica found out she was pregnant she was sure that it was Matthews but could not be sure as she saw the relationship as a little bit more open then he did.

For months after finding out she was pregnant the great shift struck the Earth and Matthew swapped bodies with his pregnant girlfriend Jessica.

Jessica thought it was wonderful that a man was now going to find out what going through pregnancy was like for a woman even though she had no idea herself as this was her first child.

He struggled at first getting used to being a woman especially one going through the amount of hormonal and physical changes as a pregnant woman.

Jessica now in Matthews body did her best to help her boyfriend through the emotional and physical changes of becoming a woman.

By the time Matthews water broke he had come to terms with being a woman and being pregnant & even though the birth was long and hard he was just looking forward to holding his baby in his arms with the strange feeling of being mother and father going through his mind.

He felt supported to have Jessica as his birth partner & to hold his hand throughout his labour.

But they were both surprised when the baby came out and Matthew looked at his new baby & was surprised to discover that he was not the father.

He looked up at Jessica and asked her what the hell was going on?

She sheepishly said okay I fooled around a bit whilst you were away on business but I was sure it was yours but the baby does have a look of Samuel our gardener.

So now Matthew was in the body of his cheating girlfriend with a baby he was not the father of.

But did any of that really matter as the hormonal joy of being a mother rushed through his body when he held his baby for the first time. 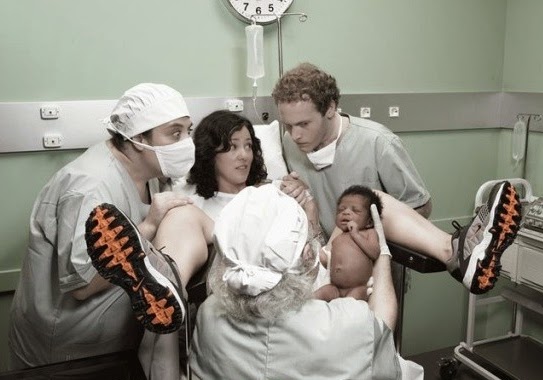