When I got home, I found a boxed gift. It was addressed to my brother. “And from Katie” I said outloud, I couldn’t believe his ex sent him a present. I openned the box, and inside of it was a black tie. “I bet he would just throw it away. He doesn’t want anything to do with her. I’ll just keep the tie myself” I said. I took the tie to my room, and put it in my wardrobe, “i’ll wear it tomorrow at work”.

The next day, after having breakfast and taking a shower, I got dressed in one of my fanciest suits. I had a really important meeting. I took the black tie and tied it around my neck. I walked downstairs, and looked for my car keys, but they were nowhere to be found. So I called a cab. On the way to the office, I started to feel weird. I saw some hair infront of my face, so I got a hair band of my pocket, and used it to hold my hair. I then noticed my chest looked funny, like they were a couple of small breasts. “This is weird, I remember them being bigger” I thought. But after looking down again, I realized they were the right size. For a second or two, I felt like I was a man, “wow, that would be funny” I said and giggled. I now remembered being a woman my whole life. I looked at my shoes, I was wearing 2 inch high heels, just like I remembered them.

When I got to the office, I paid the driver “thanks handsome” I told him. I walked upstairs, and entered my boss’s office. I told him I wanted a raise. He then took me to the meeting room. “You know what you have to do if you want a raise Mrs. Green” he said. I took my jacket off, revealing my whole figure and my sexy outfit “way a head of you boss” I told him. He locked the door, and we started working on my raise. 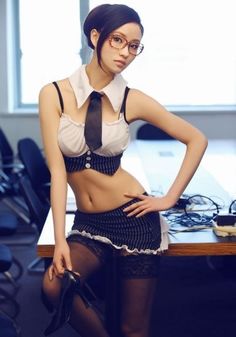