Conrad the copilot was asked by a nice old lady to check her luggage to make sure she had her passport with her, it was too high up for her to reach, and all the flight attendants were busy with other passengers. The plane had yet to take off and Conrad was not busy, at the moment, but he resisted, pulling the “it’s not my job” attitude on her.

“I’m sorry Miss, but it’s not my job. Ask one of these flight attendants or get it yourself,” said the smug Conrad, one of the best copilots in the industry, but also with one of the biggest egos as well, thinking remedial tasks for the passengers were beneath him and his paygrade.

“If you go up there sir, I’ll pay you $100, there are no other attendants that aren’t busy this plane is packed, and I can’t reach up that high, I’m elderly,” said the old woman.

“Up there with my luggage and hopefully my passport. I hope I didn’t forget it,” said the old woman a bit upset at the young man.

“Ok I found your passport Miss, but where’s my damn money,” asked Conrad.

“Your payment is in the good deed you have done, despite your attitude,” said the old woman, never truly intending to give him the $100.

Conrad turned around sitting on the luggage compartment, yelling at the old woman, “You old hag, you lied to me! Nobody lies to me, all you women are the same, a bunch of liars and cheaters and tramps. All these flight attendants are flipping bitches, being too busy not to help you in the first place.”

At that moment, the old woman realized Conrad had more of a problem than just bad disposition, he had a beef with the ladies too, for some unknown reason, he was calling many of them out, in anger and frustration, just because he had to do a flight attendant’s job of checking luggage, and didn’t even get his extra money he thought he deserved for performing outside his job description.

The old woman told him, “Fine there is an amulet behind you, a family heirloom if you will, passed down for generations…”

“Ok shut it right there old lady, I’ll get it, and it’s mine, all mine, it better be worth something when I pawn it,” said Conrad angry.

“Oh it’s worth something alright, to me that is, in teaching guys like you a lesson you’ll never forget,” said the old woman to herself, then muttering some special dialect for when Conrad would touch the amulet.

Conrad freaked, and turned around in shock. He as no longer a man as he could tell with the feeling of boobs encased in a bra, and right away noticing long smooth legs in black pantyhose. Looking down he seen the flight attendant uniform, and he was wearing one, and he wasn’t a “he” at all! He felt soft all over now, and his butt felt like two pillows, along with an empty odd feeling in his crotch. He even felt bangs now on his forehead now as well.

This picture says it all, as Conrad looks down at the old woman in shock and disbelief and horror, he just lost his manhood, he just lost his copilot status, and he was dressed like the female flight attendant he apparently now was. His name badge even said Connie Anne Jameson, instead of Conrad Andy Jameson.

One of the flight attendants said, “Connie, what are you doing, get down from there, we have several passengers who want drinks and we are super busy right now, will you please see to them?”

“But, I’m not Connie, I’m Conrad, I’m a copilot on this plane,” said Conrad in dismay.

“You are not the copilot, Connie. Have you had something out of the bar or something? That is frowned upon during working hours, as you well know,” said the that flight attendant to the new Connie, who was now one of them.

The old woman smiled, “There, now it is your job to check luggage, and since you think so ill of us women, you can BE one of us, and learn some respect. Welcome to womanhood CONNIE, now go serve some passengers, oh, and don’t worry no one but you and I remembers Conrad I’m afraid, so you are just Connie the flight attendant now to everyone else. Enjoy.”

“Excuse me, Miss, yes you. Can you climb up there and see if my daughter’s teddy bear is up there,” asked another woman, about in her 30’s.

“It’s not my job,” said Connie, still going back to her copilot ways.

“It is too your job, Miss. You’re a flight attendant correct? You are wearing their uniform, so unless you are just dressing up like one, you better get your butt up there and check on my daughter’s teddy bear, or I’m getting the pilot or copilot over here to straighten you out. I’m tired of people saying it isn’t their job, when they darn well know it is their job to do,” said the woman angry.

“Connie hurry up, five passengers need drinks,” said another attendant busy cleaning up spilled milk from a child nearby.

“Oh and by the way Connie, put your shoes back on, you have to wear them, they are part of the uniform,” said that attendant still cleaning up.

Connie looked down at her shoes, they were high heels, like many of the flight attendants, as she said, “I can’t flipping believe this, I’m not wearing those.”

“It’s part of your job to wear those, now put your shoes on, and help out these customers before they complain,” said the attendant getting impatient with Connie.

Finally the copilot came out, “Connie, what is your deal? I know it’s your first flight, but you need to get it together. Put your damn shoes on and help these passengers or you can go in cargo storage below with the pets until we arrive. This plane is taking off now, we can’t throw you off, so either get it together or you’re going into storage.”

“What the… what is all this, I can’t be a flight attendant, I’m a copilot. Doesn’t anyone remember, and who is this guy? I’m the copilot not him. I’m a flipping woman, and now all this. Ugh…, that old woman ugh…,” said Connie.

The copilot ironically was Jim Majors, the one that Conrad beat out to become copilot because he played golf with the CEO of the airline before the interviews, getting on his good side. Now his rival was in his job, and he was a lowly flight attendant, with his manhood gone as well.

Then the old woman whispered into his ear, “Get to work and do your new job, and I’ll change you back at the end of the flight. You have no choice, just do as I say or I’m not helping you. I want you to learn a valuable lesson about jobs and women for awhile. Do good and you’re back as copilot.”

So grudgingly the new female flight attendant did the best SHE could, getting really frustrated with the passengers, and that old woman that did this to her. She did well enough however though, and when the flight landed, she asked the old woman politely even if she could get changed back now.

“You’ve got to be kidding me?! Change me back, my feet are killing me in these things, and this bra is digging into my shoulders,” said Connie getting frustrated.

“Miss, I empathize as a woman myself, you’ll just have to get a better bra, and inserts for your shoes I suppose. I doubt they will let women wear flats here, from the looks of it they are all in heels. Change you back to what though? I don’t understand. Change your bra or your shoes maybe, but you’ll have to do that yourself, I doubt my bras would fit you, and my shoes are not heels, so I can’t help you there either Mam. Now good day to you, and thanks for checking on my passport Conrad, I mean Connie,” chuckled the old woman, leaving the plane.

Connie tried to follow her off the plane, but the copilot stopped her, “Where are you going Miss? You work here remember, you’re not on vacation with these passengers. You’ll get your break when the other attendants do. For now you have a lot of cleaning to do.”

“Oh you’ve got to be kidding me! She tricked me again!”

“Who tricked you,” asked the copilot.

“That old woman that just left the plane, she promised to change me back,” said Connie desperate.

“Change you back? I don’t follow,” said the copilot.

“Change me back to Conrad you idiot,” said Connie.

The copilot said, “Conrad? Who the hell is Conrad? All I remember is you trying for the copilot position, and not getting it over me. Something about the company not being fair with women applying to be pilots. So you settled for this until the situation got better. I’m sorry they treat women that way, I really am, but the fact is you are a woman, and you’ll have to try to find a way to cut through all of that and get the job you deserve. Women are strong, so you should come out on top eventually, just keep trying and be patient, I suppose. You have to do your best, for now, where you are now however, or you’ll never get ahead. In the meantime, you’re a flight attendant, so you better get to work.”

Tears came down the new Connie’s face, luckily she had only light makeup on so it wasn’t messed up too badly. She was stuck as a flight attendant and a woman, she would probably never see that old woman again. A valuable lifelong lesson would be learned by the new Connie, formerly Conrad, and perhaps at some point she would be a copilot again, but if and when she did, she would never ever act the way she did as Conrad…. 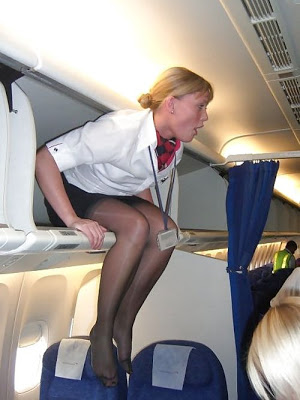