Jack was pleased hearing the pilot, Jenna, his girlfriend talk to him on the phone in the plane. However, she told him, that since he thought only men should be pilots and women attendants, that she could fix that. Jack was still smiling when his body was instantly made female, including his male flight attendant uniform. His girlfriend sounded like a dude now, and as he spoke, he heard a gal’s voice! He dropped the phone and stared down, swing a slightly protruding chest, a short skirt, long sexy legs in black stockings, and black flats.

“Um, Jenna you can’t be serious, I just mean those jobs are usually meant for those genders, and we were the oddity with you being a female pilot and me a male attendant is all. I meant nothing bad about it,” said Jack in his new voice in shock at how his new body felt now.

“No I agree, Jack, you are right, I think we would be treated better if our genders fit our jobs better, so from now on I’m the man and you’re the woman, I’m a male pilot and you’re a female flight attendant. So are we still on for the hotel room when we land,” asked Jenna in her commandingly deep voice.

“But’ I’ll be on the receiving end,” said Jack with trepidation.

Jack hung up and couldn’t believe this, he was now a woman, and his girlfriend a man, and she actually wanted sex later. On a side note, Jack did think his new legs felt and looked sexy, especially in the stockings, maybe he would leave them on at the hotel room…. 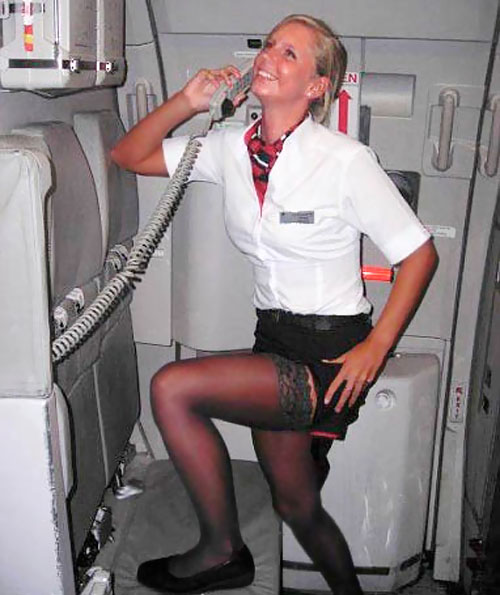