“You better fix this! Right now!” yelled Brandon, as he wagged his finger in Anna’s face.

Well, technically since he was currently in her body, Brandon was wagging Anna’s finger in front of his old body’s face.

“What are you so angry about? It was an accident, I swear, ” said Anna.

Anna was Brandon’s teacher, a professor at the University. He had been helping her with one of her experiments when something went wrong and they ended up switching bodies. At least Anna claimed it was an accident.

“Bullshit! ” yelled Brandon angrily. “You did this on purpose. I have seen you lusting over my body all semester. Don’t deny it! And now thanks to your little experiment, you have it all to yourself, just like you wanted. Jesus, do you have an erection right now?!?”

Anna blushed, but couldn’t hide the bulge slowing growing larger in her pants.

“It’s not what you think,” she said nervously. “It’s your body – well, my old body. Seeing it this close, the cleavage of those soft, luscious breasts ….. well , it is just really turning me on. I mean, can’t you feel it yourself?”

“Fuck it, let’s do this,” said Brandon as he dropped down his panties. Anna fumbled to open her pants as quickly as possible. Brandon licked his lips in anticipation at the sight of his large pulsing cock. He could feel the moisture leaking from his wet pussy. “But you will change us back right after we are finished.”

Brandon lowered himself onto Anna’s straining erect cock. His mind exploded with pleasure as the stimulation of his pussy sent shivers of ecstasy rocketing throughout his whole body. He and Anna both groaned with excitement.

“Okay, maybe not immediately, ” grunted Brandon in between the throes of passionate lovemaking. “This definitely deserves more study. We might need to conduct a few more experiments first.” 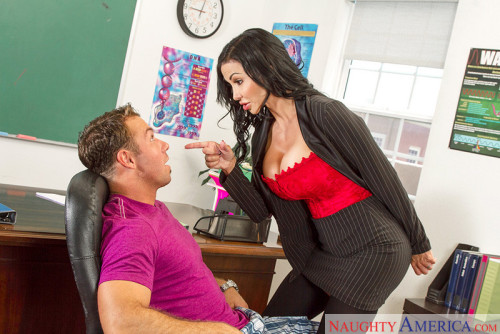