Stuck in the past. Part 6

“Hey Scott” Martin smiled. “Oh, hey” Scott was surprised. They didn’t talk to eachother for a week and Scott thought Martin is still angry at him, yet Martin surprised him with a warm smile and a special made lunch. For the past week Martin spend most of the time with Laura’s friends. He was surprised he could enjoy doing all the girly stuff like shoping and talking about boys. He even considered to join the cheerleaders but in the last moment he remembered he must be carefull not to change anything in these times and since Laura never was a cheerleader he had to refuse.
Lately he was thinking about the good days with Scott when he was still a guy. He missed spending time together but Scott was busy with repairing the device and of course there was Jenny. When Scott ended up in here Martin was very glad to see him. Finally he wasn’t alone in this strange world. Unfortunately their friendship was falling apart. Martin couldn’t let this happen, it was time to fix this and work together on the device so they could finally go back home.

“I was thinking that maybe we could hang out together” Martin said. “I don’t think we can. I mean we need to fix the machine, there is no time for slacking off” Scott said. “Who said we will be slacking off? I ment that we could work together, just like at the begining. You know, me, you, trying to get back” Martin hoped everything would be like before. “You know, i think it’s a great idea. We are separating lately and we can’t let that happen. Best firends?” Scott reached out his hand. “Friends!” Martin hugged him.

“Scoooott! Scoooott!” The wonderful moment was interrupted by Jenny, screaming and running their way. “Oh great” Martin rolled his eyes. Jenny was in such a hurry she tripped off and almost fell on her face. In the last second she ragained her balance. Martin had a slight hope she would hit the ground. what a shame she didn’t. “Scott, i have great news. With this i think we will be able to fix your problem” She showed him some notes. “So, i guess today at my place?” She asked. “Wow! it sounds great” Scott was happy but as soon as he saw Martin’s face his smile dissapered. “But i can’t today. I’m going to spend some time with Laura” Scott said. “Really? And what are you going to do?” Jenny asked. “That’s none of your business” Martin interrupted. “Don’t tell me she is going to help you” Jenny laughed. “Of course i am!” Martin protested. “Really? Our princess is into that kind of stuff? I will gladly see it” Jenny had the dorky smile on her face that pissed off Martin, he had to restrain himself from punching her in the face. “Today, at my place, both of you” Jenny said and departed, leaving the two friends. “Are you going?” Scott asked carefully. He saw the fury in Martin’s eyes. The two of them together could make a catastrophy far worse than time distortion. Scott will have a hard time keeping these two girls away from killing eachother. 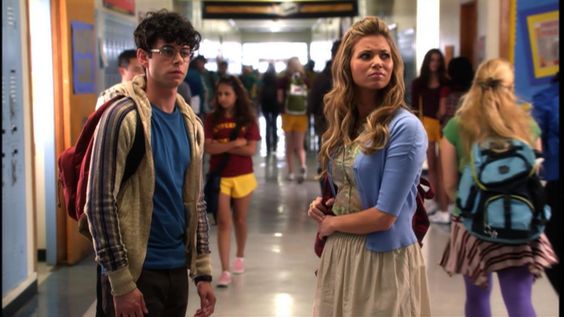