Smell Me After Class

Ted was goofing off again, making fun of his teacher Ms. Leigh. As she was teaching, and walked by his desk, she dropped a small note for him.

It read, “Smell me after class.”

So, Ted stayed after, but she told him to go along with the rest of the class. He was confused, but left, actually relieved he wasn’t in trouble. A few minutes after walking out, he was telling his friends how crazy Ms. Leigh was, and about the strange note in class. Then suddenly things went blank.

When Ted came to, he had a shoe, like a woman’s flat up against his nose and was getting a good whiff of the scent from the shoe. At that time, Ted also realized he felt strange, and wasn’t out in the hall any longer, but sitting in the small office behind the classroom he was just in. The smaller softer frame, the feel of long hair frame his face, the weights on his chest, and the emptiness between his legs along with the tight silky wardrobe he now had on let him know something was different, not just about where he was, but who he was!

As he put down the shoe he noticed his nails were painted black, and his hands were different, smaller more slender, a woman’s hands! He then looked down to see the long dark brown hair over his chest, which now protruded out pushing against his tight fuchsia top! Below that a smooth crotch in silky black pants. He was putting it together, this was what Ms. Leigh was wearing today! He felt his new long earrings dangle, tugging at his ears, as he noticed his ankles and feet were in black nylons, in fact they felt as if they went all the way up over his waste, and bubbly soft new ass! He also noticed his lashes were longer as he blinked, and his lips were waxy and tasted like berries.

The voice was a dead giveaway however, “Oh no, what… happened… this voice, this body, these… these… clothes! I’m… Ms… I’m M… MS. LEIGH?! How is this happening? One minute I’m out in the hall, the next sitting here in HER body! I’m HER?! I’m MS. LEIGH, oh no! That shoe too was smelly, oh wait a minute. The note said ‘smell me after class’, meaning I was smelling her shoe after class from her sweaty foot, so she was right. I was smelling her after class, AS HER!!! I’ve got to do something.”

Ted didn’t even bother to put the flats back on, just got up, feeling the long hair flop about his face, as his soft tiny nylon clad feet touch the floor, as he walked out of the back room and into the classroom. There he seen his former body standing there smiling.

Ms. Leigh in Ted’s body said, “So, Teddy, didn’t I say you would ‘smell me after class’? What did you think? Do my shoes smell nice or what? My feet get kind of sweaty being in shoes and nylons all day, but they do look nice don’t you think? This is my payback for you constantly making fun of me in front of the other students. You think you are so much better? Prove it, you are me now, let’s see how well you teach the class. Also, I don’t think we will be swapping back either. The spell I used was one way according to that bathrobe guy at the mall that sold it to me anyways. So enjoy Ms. Lori Leigh, you new body and your new life as the health teacher. I’m going to be watching you, and ready to make fun of you in class, much like you did to me. How does it feel now that the shoe, well smelly shoe is on the other foot, baby cakes? Is it all you imagined if you were a woman? Doesn’t matter, I’m Ted now, and you’re Lori, and everything is hunky dory! Ha, that rhymed. I can’t wait for the next health class. Goodbye Ms. Leigh.”

The new woman stood there in stunned disbelief, her nyloned feet airing out from the shoes that were now hers to wear, ballet flats, shoes women wear, and now he was a woman for good. 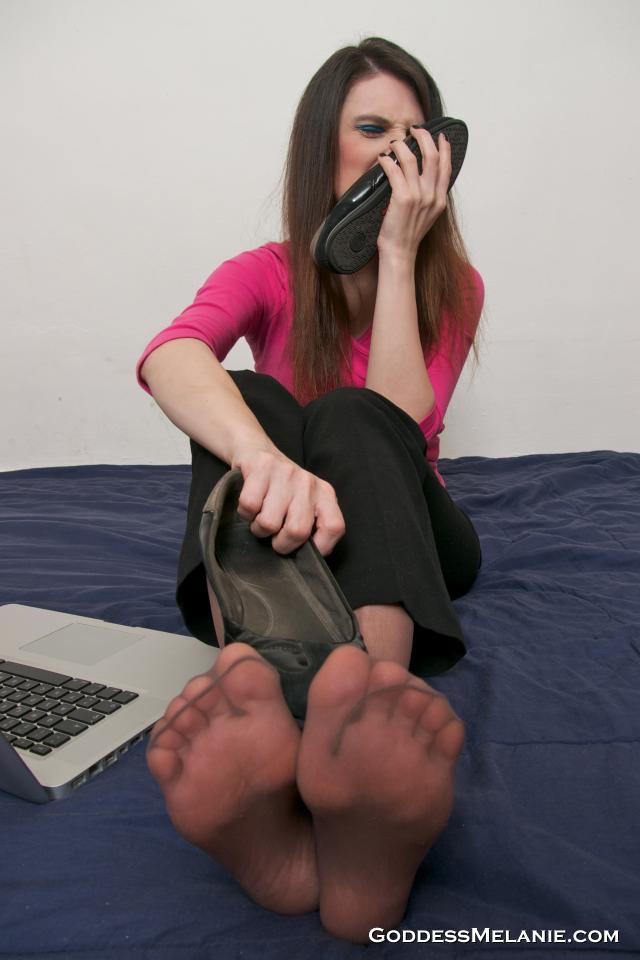