Sandy the soccer mom was tired of her life, and dominating husband with unruly teens in the house. She sat at the edge of the bed wishing for a new start and to be young again. Tim the paperboy happened to be riding by on his bike when he blacked out. Suddenly he was sitting on Mrs. Sandy Larson’s bed, and was wearing Sandy Larson’s body!

His new manicured hands immediately raced for the hair, then the boobs, then the crotch, a normal reaction to this, finally reaching below his new white skirt shocked at what he found. When Sandy’s hubby got out of the shower and seen Sandy doing what looked like playing with her lady parts, he considered this foreplay, and dropped his towel to show his rapidly erecting cock.

Tim was in shock not only at his body, but the Mr. Ted Larson standing naked before him with a huge erect member. Not only was he now a well endowed mature woman, but he had a well endowed mature man headed straight for him. Why was his body getting excited though? Why was he getting wet below, and why did that cock look so delicious? It seemed Tim inherited Mrs. Larson’s desires as well.

Meanwhile Sandy smiled after realizing she was a dude now in Tim’s body, and had male equipment and was young. She could start over fresh now, and as a man, in what she believed was a man’s world anyway. Tim on the other hand was about to protest until he had a mouth full of his new husband’s cock. Then his hormones took over, and his lustful wifely urges and desires took hold, as he began to relish the cock in his sexy new mouth, his eyes going from shock to bliss in seconds. Perhaps this change did both of them good. 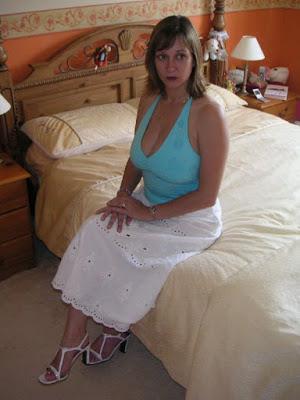