James hated having to play Alice from Alice in wonderland.

He missed his old simple life as a gardener at the Magic Kingdom.

he was grateful that the company decided to keep him on but he was not happy with his new job.

If just being a woman wasn’t bad enough he now had to wear a ridiculous costume & always be happy and cheerful all day.

he did not like having to go and do the meet and greets & sign autographs as well as sing and dance in the parades but what choice did he have in the matter.

As he stop to pose for another annoying photograph as he made his way down Main Street towards the castle for the mad Hatters tea party which he really hated.

but he had to admit to himself his new body did look the part and the extra pay was very helpful seeing his wife was now a toddler and unable to earn or even look after herself which meant having a childminder which does not come cheap. 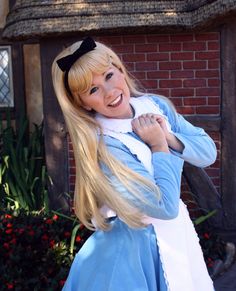