Moving to a new town

My family and I moved to a different house and town. I was reluctant to go. I was leaving all my friends, and for the first time ever I was doing great at school. To make matters worse, we had to move one day early, I didn’t even say goodbye to my friends.

When we got to our new home. I realized it wasn’t so bad. It was a nice house. I started unpacking my stuff. I noticed a pair of orange headphones lying right over one of the boxes. They weren’t plugged to anything, but I could swear I could hear sound coming out of them. I picked them up. I could hear the sound louder. I placed them over my ears. It was music, sounded like some kind of hip-hop. I hated hip-hop, but nonetheless I started dancing to it. At first I kind of sucked, but a few minutes later I was dancing with ease.

I felt thinner, like I had lost 30 pounds. I lost my balance and fell to the floor and hit my head. I started scratching the back of my head, when I heard the door open. It was my new neighbor. He was cuter than I expected. “Hi… I am Kim” I said, “Sorry, I wasn’t expecting you to move in, until tomorrow.” I looked down and realized I was wearing almost nothing. “Oops, this is so embarrassing” I grabbed my clothes, “nice to meet you” I said while kissing him on the cheek. “You are a quite one… bye”, I ran down the stairs putting my pants off, when I saw his parents. “Sorry, not what it looks like”.

As I walked out their new home, I was stopped by my new neighbor “John, my name is John! Come back later tonight, we can have dinner”. Of course I agreed. I was kind of a tomboy, and I don’t know why, but I felt like this was the guy to date, and possible marry. 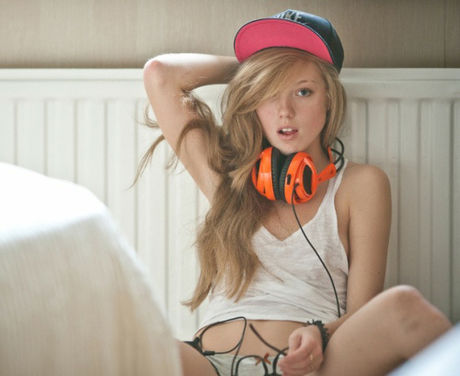