If You’re a Success

“Derrick if you’re a success then I’m a hot blonde with a big ass,” said his brother Jeff.

“If you wish, bro,” said Derrick, “You failed to ask what I’m a success at, it’s magic, bro,” an eager Derrick went on smiling.

A stunned Jeff looked behind him and touched his new large round ass, it was real and was his! Then he ran his fingers over his new ample chest, his long blonde ponytail, and finally his crotch, as his mouth opened aghast at the changes to his body.

“What did you do to me,” asked Jeff, as he realized his voice was now high and mousey as well.

“You said if I was a success then you were a hot blonde with a big ass, well that you are, bro, or should I say sis now?”

Just getting up from the chair felt weird, and sitting on that new ass felt like he had two pillows attached already. His body jiggle and swayed, and he rubbed his ass as he went for a mirror, only to open his pretty new mouth in stunned disbelief and shock.

“Like my work, baby? I think with that body, you’ll be a ‘SUCK-sess’ as well,” laughed Derrick.

“Change me back this instant, joke’s over,” said the new large bottomed gal Jeff had become.

“No can do Jenna, I like you better this way, so I used permanent magic, at least now you are better to look at, even though you are a part of the family still,” smiled Derrick folding his arms at his handiwork.

Derrick said, “I’m not kidding, and if you are lucky you can be my assistant on my magic shows. I’m sure you’d look great in a nice hat, tight leotard, pantyhose, and high heels on stage helping me with my acts. Though we will have to get larger pantyhose to fit over that big butt you have.”

“Assistant? Pantyhose? Heels? Are you kidding me,” yelled Jenna.

“Well, these boobs feel kinda nice I have to admit,” said Jenna, admitting defeat, and trying to embrace the positive. 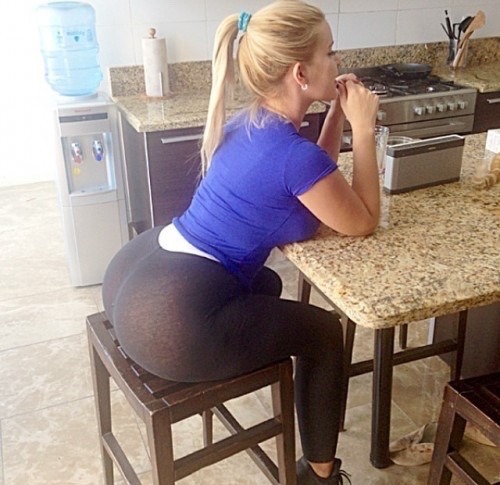