Genderwave sucks when you had a big sister

Jeremy was looking at his ID-card when the genderwave was about to hit his town. He, his family, his friends … they all knew what was about to happen when the wave hits. The hours before the wave hit he knew that he would be annoyed the most by one thing. It wasn’t that he would instantly turn into the girl he would have become with two X chromosomes and it wasn’t that he would get a random girl name together with the family name of his mothers side of the family. It also wasn’t that he no longer would be the good looking guy who could get every girl he wanted and his plans for the football scholarship were also over now and he had to pick a completely new way in life.

No, it was that every expert said that siblings of the opposite gender would probably switch their attitudes and lifestyles, just as if they have been raised in the opposite gender from birth on. The problem with that was that his older sister, Brittany (29), was known for being a college slut and she wasn’t even ashamed of it. Everything that mattered to her in life so far were men, fashion and being clueless.

While he was thinking about that the wave hit and instantly changed his name to Breanna (“Really, the name of my bitchy ex-gf?”) who was still 19 years old. Just a fraction of a second later he or rather she already noticed her boobs settling in her bra. “Oh right … great. Bigger boobs than my sister had. I forgot that the women of dads’s ..um mom’s side of the family had the bigger chests.” Breanna said in her high soprano voice.

Breannas family had, like most of the population, come to terms with the changes and tried to live a normal life. Breanna had it hard since her predicted changes came true. She was interested in boys, loved cocks and was proud of her big boobs that attracted boys. Deep down she was still a bit Jeremy who would be embaressed from time to time by her behaviour. One evening Breanna thought she would be alone at home with two of her male friends when her brother suddenly entered the house. First saying nothing, then smiling at Breanna:
“Oh wow, sis, you are really going at it, sorry for disturbing. Your DD’s really make it easy for you. I mean if I still was a chick I’d be a bit jealous, but you see, when I was a woman I always considered myself a slut, but now that I got a cock between my legs I know that I only acted like a man when I had boobs. Think about that slut … and a little advice: swallow. It makes everything easier.” The former Jeremy was getting a bit angry while holding the two hard cocks in her hands.
“You think I didn’t know what you and your friends said behind my back? Well I’m considered just a man now who has a good sex life, you are a slut. Sorry guys, didn’t mean to interrupt. I hope one of you fucks her in the ass, I heard she likes that … ” Breannas new brother said and went away laughing.
The slightly shocked Breanna was embaressed, yet she was hoping that she’d soon feel the nice thick cock of Kevin in her left hand finding it’s way up her ass… 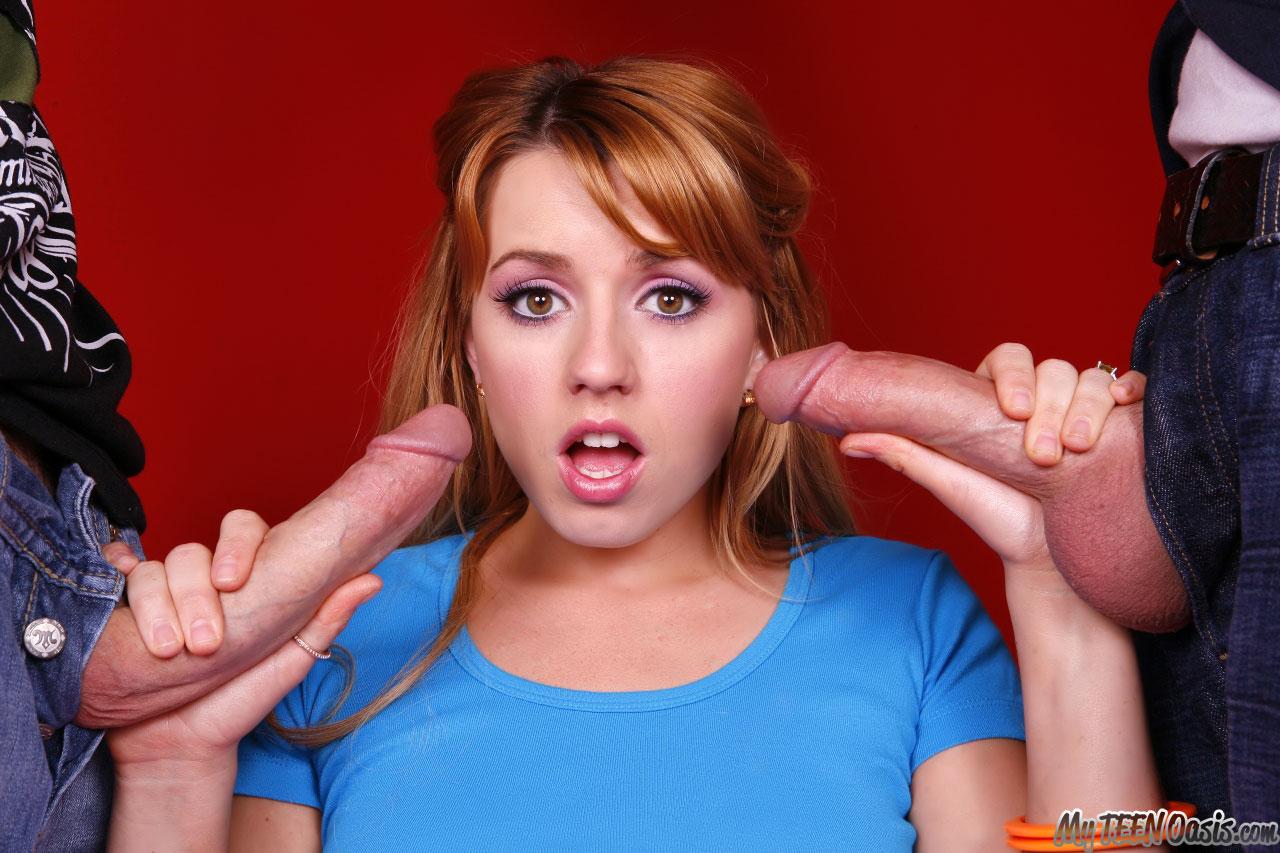