Better as a Girl

“Dude I can’t believe my mom found that remote, I’m getting kinda jealous, she can do anything with it” All of a sudden, Justin’s mom walked in and pointed the remote at him and his friend. Justin began to shrink and his friend Eric grew a little taller.
Justins hair began to grow, his arms becoming slender, his hair becoming non existent everywhere else but his head, his chest grew, his penis shrunk and his body now stood 5’2 instead of the 5’11 he stood before, his penis replaced with a soft wet pussy. He was now for all intents and purposes a girl.
“Here’s how its gonna work said Justin’s Mom” Justin your name is Hailey now, your my best friend. Eric your gonna fuck both of us, I’m tired of being 40, I’m going to make myself a little younger than you two are, Hailey your gonna be my age, Eric you’ll still be 18. Hailey we’re 16 now, Eric is a senior at our high school and I’m gonna show you how to take a cock in your pussy for the first time.
Haileys memories changed before she could remember being Justin, she could remember having just graduated high school but now she could barely remember how to do algebra, her friend Adrianna was helping her relieve her stress, she was so lucky Adrianna’s parents were out of town, it was so fun to be alone just them two and Eric. Hailey had had a crush on him forever and couldn’t wait for Adrianna to guide his dick into her hot eager pussy. Hailey waited leaning over the edge of the washer in anticipation as she felt his dick touch the lips of her virgin pussy. 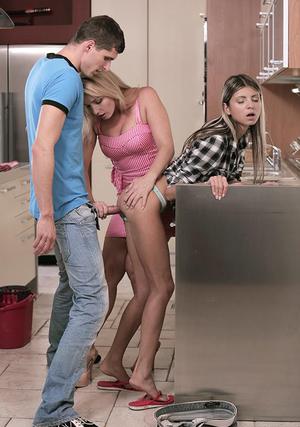