Being Able to Tolerate Seclusion

Tad was secluded on a desert isle after wrecking his ship. He found a genie lamp hidden in the sand, and as he rubbed it, a genie did in fact come out! He thought he could wish his way off the island, but no can do. First of all the genie only grants one wish. Second, the genie is stuck on the island and cannot let others leave that find him!

“If I can leave, then I wish to be able to tolerate being on this island,” said Tad.

Suddenly Tad fell forward into the sand, his breast swelling to huge proportions, as his ass expanded with his hips! He was now wearing only a bright blue two piece bikini, and his now long brunette hair was tied in an up do! His hands digging into the sand were now tiny, with long nails at the tips of his fingers! Beneath the bikini bottom, his new plumbing formed replacing his old!

The genie said, “You can tolerate being on this island with me now, as my female lover, Tamara! From this time forward you will be known as my island mistress Tamara, here to satisfy my every whim, as yours new desires will be satisfied as well. Yes new desires, you like men now, particularly the genie, me! You won’t be able to resist me, and will be so horny you won’t ever be worried about leaving the island again! I am the genie, I am your man, you are my woman! Rise from the sand Mistress Tamara, let me gaze upon your magnificent bust!”

Tad, now Mistress Tamara, eventually rose form the sand, overwhelmed by her new center of balance, her breasts immensely large, larger than on any woman she had ever seen as a man! Her ass and hips were equally large, pronouncing her newfound extreme femininity! A few stray strands of hair got into her eyes, so she checked her hair, it was mostly up and as she tugged at the back, it flowed down her back and over her luscious breasts, going below her new sexy small waist and large round soft bottom! Tamara stood there in shock on her tiny new feet, her toenails painted a bright red to match her fingernails, but she couldn’t see this as her massive chest was in the way!

The genie smiled and was pleased, and pulled out his very large penis, ready for action right there on the beach, after all no one else was around for miles, and if they were, he would try to make two mistresses instead of just one! Tamara stared as herself in shock and horror, then at the genie, as lust filled her mind for her new man! She was in complete control of her sexy new body, however her new desires were so strong, she couldn’t resist the well hung hunk of a genie before her! She was eventually back on her knees in the sand, only this time upright to please her new master’s man meat! 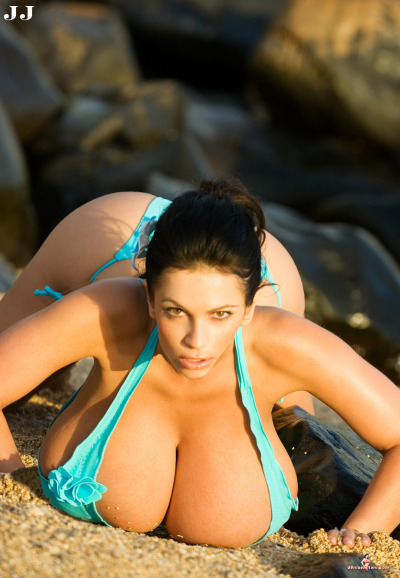