“Well, Mom was always telling me I had to find a good job, so here goes nothing,” Troy said, drinking the elixir in one gulp. He felt a warmth spreading all over his body, and suddenly felt…more. His jeans started to feel tight as his hips widened, and his ass swelled out. The sudden pressure that had caused on his crotch was quickly alleviated as his dick shrunk down, and finally left a moist slit in its place.
“Wh-what’s happening?” he said, hands rushing down to feel his new flat crotch. The changes continued, moving upwards. His toned stomach quickly faded, replaced by a much chubbier one. His arms grew slimmer, and his hands were now soft and dainty. His hands rushed to his face as his features softened and his hair grew out.
Then his chest started itching. He scratched at it, and eventually removed his shirt to see what was going on. His nipples had become dark and hard, and below them he could see two mounds starting to form. He pressed his hands up against them, but they ballooned out regardless, his hands sinking into the softness of his new breasts.
Finally they stopped growing, and the warmth faded. He let go of his boobs, and let them fall, settling heavily on his chest. “What the heck is this?” he shouted, looking at his, or her, new body in the mirror. He bent down to pick up the note that had been attached to the bottle of elixir, and sat down on his bed to read it.
“Congratulations! You’ve decided to take our new formula! Business has been rather slow lately, so we needed some new employees to drum up some more, and you were selected! We hope you love your new assets!” The logo on the bottom was for the local strip club, one which catered to rather large tastes.
Troy, now Tori, looked back in the mirror and sighed. “I guess this is it then. The new me. At least the job should pay well…” She started at her new breasts for a few more moments, before deciding to go find something to cover them up with.
She walked quietly over to her mother’s room, trying not to make noise that would alert her mother downstairs. When she got into the room she dug through her closet for a bra and shirt. “Hopefully these will fit…” she muttered, picking out a white bra and blue top with a deep v-neck. She clasped the bra, and attempted to fit it up over her breasts, to no avail. She managed to get her boobs into the cups, but they were spilling well out of the top. “Gosh, I’m even bigger than Mom…”
Tori took of the bra and threw it back in the closet. She then pulled the blue top on over her head, barely managing to contain her chest inside it, when her mother burst into the room shouting.
“Who the heck are you?!”
“Mom, it’s me, troy!”
“No you’re not! My son isn’t a woman with boobs almost as big as mine!”
“Yes, it is me! I drank some formula that turned me into a woman! I misunderstood that recent job application… Turns out I’ll be working at the strip club!”
Her mother just stood there in shock, not knowing what to say. Tori quickly broke the silence:
“And what do you mean ‘almost as big’, Mom? I tried on your biggest bra and I was bursting out the top. Mom: I’m bigger!” 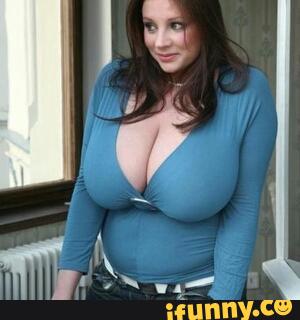