Where She Got Them Part 3

Martha picked up the stone again without even bothering to get dressed, but this time made a much different wish than the past two. This time she was standing in a bathroom. The bathroom of her house. And she wasn’t alone.
“I was wondering when I’d finally be seeing you,” the other girl said. Martha’s jaw dropped as she turned to come face to face with…
Herself. Well, seeing herself wasn’t the surprise. That’s what she had wished for, after all. No, the surprise was how, well, big her future self was. “Yeah, I know, take a good long look,” future-Martha said. “Better yet,” she grabbed her phone and snapped a picture, striking a pose that showed off her very pregnant belly. “There. It’ll last longer.” She handed the phone to Martha.
“So we did become-” past-Martha started to say.
“Pregnant,” future-Martha finished. “Yeah. We became pregnant with our own baby, all because we thought we had fixed the past. And it all started because we were being pervy on our busty sister.”
“And now we’re the busty ones,” past-Martha said, glancing down at her breasts. Her future self walked over, and took one in each hand. “I miss these,” she said, giving them a squeeze.
“But they’re right there on your own chest!”
“Ha-ha, kind of,” future-Martha said wistfully before she pulled her bra up over her head and let her heavy breasts fall against her belly. They were larger, and her nipples had gotten even larger and darker. It was clear they were engorged with milk. “My boobs haven’t been that perky in a few months. Although, they are much more sensitive now…” Past-Martha reached out to touch them, then remembered what happened the last time she started to get frisky with herself.
Suddenly future-Martha looked up from her breasts, and said, “I almost forgot! You don’t have much more time! You have to use that stone again. Go back into the past, and right our mistakes. If you do, then that picture will change. My belly will shrink back down, and my boobs might even fight into one of my sexy bras again.” Future-Martha chuckled slightly, before past-Martha was sent back to her own time, a new mission set in her head… 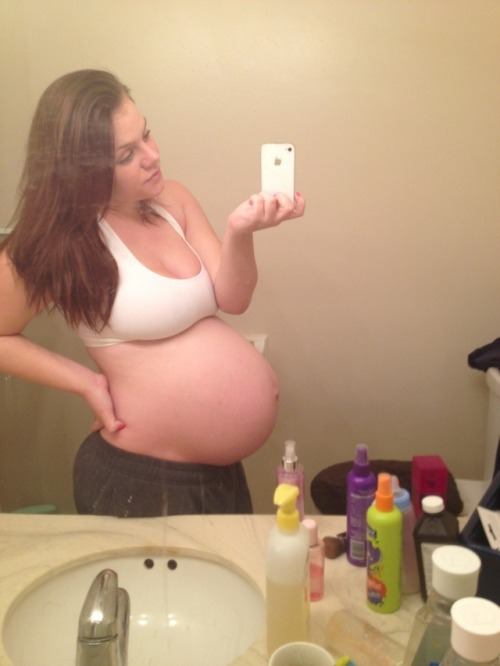