It was Saturday morning when Bill called. “Dave, I need a big favor.” Bill is a professional photographer and my best friend. “I’ve got an important shoot today and my model is a no show. I was wondering if you would stand in for her? I’ll pay you the going rate.” Now asking a male buddy to stand in for a female model isn’t as weird as you would think. I don’t know where he gets them, but Bill has a source for Pink Pills. You know, the ones that change men into women. Also, the Blue ones that change them back into men. I don’t mind being a chick for a couple of hours to help out a buddy, I’ve done it a few times before, and besides, the extra money comes in handy. “Sure Bill, I’m free today. I’ll be right over.” When I walked into the studio, we were the only ones there. Bill said, “Thanks a lot Dave. Here’s the Pink Pill. You can change in the dressing room. Your costume is in there.” I went in and took the Pink Pill, the change started immediately, then I looked for the costume. “Hey Bill!” I yelled through the door. “There’s nothing in hear but a red thong.” I heard Bill stammer, “Err yeah, I guess I should have mentioned that. This shoot is a bit different. It’s for a men’s magazine. Are you OK with that?” I considered a moment then thought, What the hell. No one will recognize me anyway. I finished changing, put on the thong and went out. Bill nodded and said, “You look great. Let’s finish getting you ready and get started.” “what do you mean by finish getting me ready?” I asked. “Didn’t I tell you?” he answered taking rope out of a bag. It’s a fetish magazine and these are supposed to be bondage shots. I don’t know where Bill learned to tie rope, but he is very good. Soon my upper arms were bound together behind my back and my wrists were bound at my sides. My ankles were bound to my thighs and a knotted rope down my back had me sitting straight with my chest stuck out. The ropes were very soft but incredibly tight and surprisingly comfortable. A large red ball gag was shoved in my mouth and the strap buckled behind my head. Now I was immobile and mute. I was placed on a soft blue rug Bill had laid out in the center of the studio. He studied me and said one more item and we can get started. With that he drug a large mirror in and set it up in front of me and for the first time I saw myself. What I saw was a very pretty, beautiful in a girl next door sort of way, twentyish girl with long dark red hair and prominent, but not huge, breasts erotically on display in perfect bondage. I found this very disturbing on many levels. All though I had been a girl before, I had never really looked at myself while changed and never really thought of myself as a girl, beautiful or other wise. Now I couldn’t look away. Also, though Bill didn’t know it, I do have one secret fetish. Beautiful women in tight bondage really trip my trigger and what my male mind was seeing was really turning it on. In the back of my mind, I knew this was make believe and could hear Bill’s camera clicking away but my attention was totally focused on the vision before me. It was both surreal and erotic at the same time. I saw a puff of air blow a strand of her hair across her breast and felt it on mine. I saw her nipples get hard and felt mine become diamonds. I saw her wiggle in her bondage and felt my body strain against its ropes. I saw her eyes widen in excitement and felt my excitement rise also. I saw a shudder cause her breasts to jiggle and felt the same jiggle in my breasts. I saw her sway and move to the limits allowed by her ropes as I swayed and moved to he limits of mine. I saw her face and skin flush as I felt a rising heat in mine. I saw her hips rock back and forth as I felt the crotch rope dig maddingly into the crease between my legs. I felt a growing wetness and could smell the scent of an aroused woman in heat. NO! This has to stop! Legend says that a man who experiences extreme arousal while changed by the Pink Pill can become trapped. Unable or unwilling to change back even with the Blue Pill and still that damn camera click away. All I can do is make soft mewling sounds as drool leaks around my gag and falls on my breasts. Bill stops shooting and says, “That’s a wrap.” Finally! I glance at the clock on the wall. It’s only been two hours!? It seems like two days! Bill walks past me and says, “You money and the Blue Pill are on the counter. I want to get started editing these so go ahead and get changed and I’ll call you tomorrow.” With that he walks out the door. WAIT! The idiot forgot to un tie me! He’ll be in there for hours. Stop! Come back! I’ve got to change back now!.

Bill sat back from his computer, glanced at his watch and chuckled softly. “Well Dave, I bet you didn’t think I knew about your bondage fetish did you? Those Pink Pills are damned expensive, especially that last double strength one. Eight hours as your own living wet dream should have all the male cooked right out of that pretty little head of yours. I’m really going to love having my own personal live in girl friend and fetish model.” 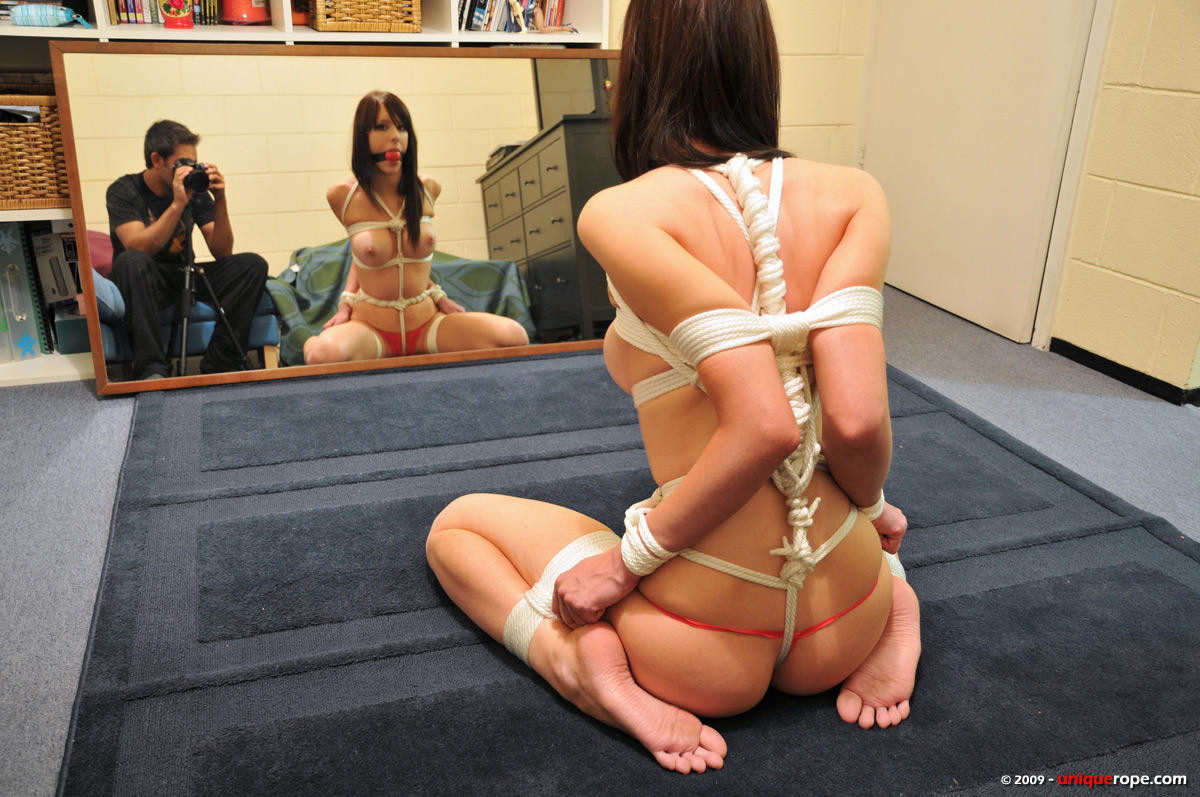