Stan sat in his cubicle. His gray shirt blending into the bare walls of his work space. He toiled away only pausing to sigh every once in a while.
“Stan I’ll need those expense reports filed in triplicate by tonight, you mind staying in late to finish?” Stand did mind, but he couldn’t say no to his boss.
“Sure thing boss!” He said through transparently faked enthusiasm. His boss smiled and walked off, ready to leave for the day. His friend Jeff walked by the opening to his cubicle.
“See ya later for the game?” Asked Stan coyly.
“Yeah… Uh, rain check? I just realized I got a thing I gotta do. Family stuff, you know?” Jeff said, unconvincingly. He’d learned not to even try since Stan was such a pushover.
“Oh. Okay.” Stan sighed. Once he finished his work he stood up, flicked off his light and walked to the elevator through a dark office. While he stood, descending in the muzak infested chamber, a glint of reddish brown caught his eye. A shiny penny was face up on the floor. He bent over and picked it up muttering to himself “Oh! A lucky penny!”
As he departed the office building he noticed something he rarely has seen. The Wishing Fountain wasn’t on. It was still and lifeless for the night. He wandered over to it and gazed in seeing thousands of coins littering the bottom. All wishes of one sort or another. Stan gazed at his weak reflection in the gray light of dusk and noted his short messy brown hair, his spotty stubble, his weak jaw and weaker neck. The flab of his body, the sinking of his shoulders from years of abuse. He simply looked like a weak, submissive blob of nobody. Then the wish came to his mind. He tossed the penny in and said: “I wish I wasn’t so submissive.”
Just then, out of nowhere a flash came off the glittering penny as it hit the water. It shocked him and he raised a hand to cover his eyes. As he did he noticed that black latex was on his fingers, and now his hands. It was growing up his arms.
Startled, Stan fell back onto his ass which hurt remarkably less than expected. He reached down with his now gloved hand and realized his rump had fattened and rounded, growing both out and wider. He was further shocked by the level of detail he could glean due to his lack of pants. He looked down to see but his vision was obscured by two growing mounds of flesh encased in lacy cups of fabric.
“What is this?” He asked in a much more assertive person’s voice, he felt himself growing angry and finding a newfound agency to do something about it. He ran back to the fountain to look at himself again. As he drew to the edge of the water he was shocked to see his body as it was. His shirt had become a lacy brassiere supporting to proud breasts, his pants now a pair of thigh high leather boots with growing heels over mid thigh stockings and a matching pair of scandalous panties concealing a shrinking bulge. This last detail startled him further as he reached down to feel the last of his manhood wither away with a slurp. He now groped at an ever moistening vagina. He began to feel warmth radiating from it as blood made it swell and fluid pooled in his new panties. Suddenly the warmth was interrupted by a new development, his waist suddenly caved in restricting his breathing in a patent leather corset matching his, well her, boots. Stan then stared.
Before Stan was the reflection of a woman in fetish gear, a dominatrix, with his head. Suddenly as if commanded by thought, even that changed. His skin became smooth and hairless all over his body. Growing pale and even toned. His jaw sharpened and his neck strengthened. His face became silky soft and his cheekbones flared. Then his hair grew first just long and wild, but then it became cherry red, and then streaks of black sprouted from his bangs. Suddenly and without warning, his eyebrows vanished leaving his face looking alien and beautiful. This worry was soon abated by the sensation of a thousand needles forced into his brow and eyelids as black ink tattooed a permanent gothic eye shadow on to his eyes and his eyebrows were drawn thin and curvy, like his new body. With a start the last change occurred as a ring of metal pierced his lip and his transformation was complete.
“What happened?” The new girl asked in a voice unfamiliar. It was deep and feminine. Sultry yet with a telltale smoker’s rasp. She guided her latex hands down her new silhouette and shivered as they reached her thighs. She felt a sudden need. With that she got in her car and drove to the bar where her friends no doubt were. She had plans for Jeff. And as the thoughts grew in her mind of making him squeal for what he’s done a riding crop appeared in her passenger seat. She chuckled and drove on. 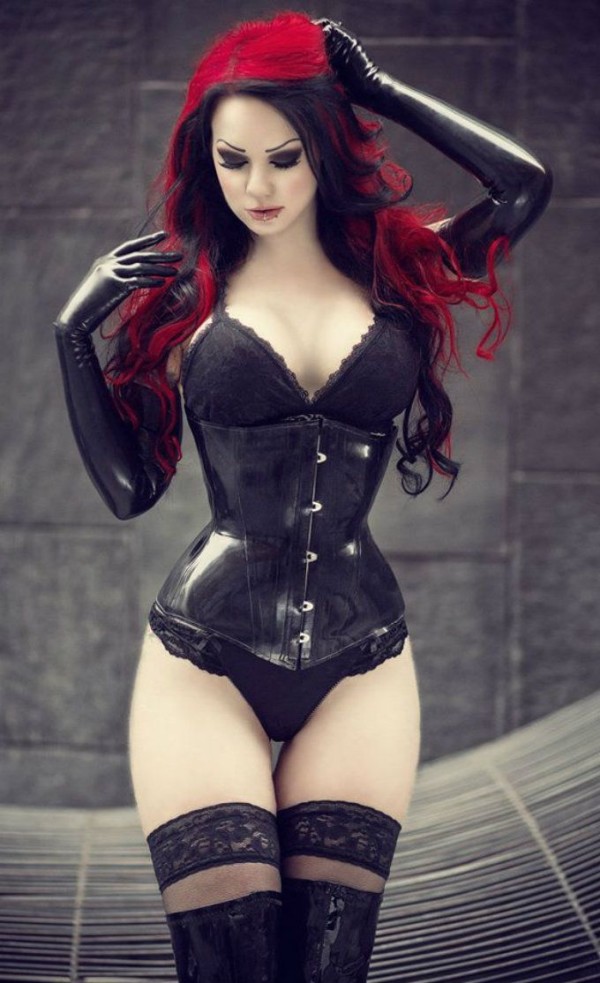