Strangle or Straddle the Genie

Ted wished to the genie for lots of fish for his business, as he didn’t want money just handed to him. The genie was a bit mischievous and granted the wish differently.

Ted felt weird, and he now had long hair, boobs, and a pussy, wearing only a bra, and fishnet pantyhose. He also smelled fish!

The genie said, “You were granted your wish, TESS! You have lots of fish smell now that you are a hooker, your business is hooking now, and you won’t just get money handed to you unless you put out!”

Ted, now Tess jumped on the genie, who was well dressed with a dress shirt and tie, a more modern genie. Tess demanded to be changed back in her sultry sexy voice, but the genie said he granted the wish, and that was all he could give!

“It could be worse there Tess, I mean you still have a job, and it pays well, and you’ll get pleasure for it. You are young and hot, just be glad I didn’t turn you into something else. I twist wishes, its’ what I do, when people wish for themselves. If you had been less selfish, nothing bad would have happened to you or anyone, not that this is really that bad, you look hot baby. Want me to be your client for the evening? I’m for it! Let’s go baby,” said the genie smiling.

“GENIE!!! OH YOU… are so hot, let’s have a go, what do I have to lose, I’ve already lost my manhood and my fishing job,” said Tess giving up and in to her new desires and life. 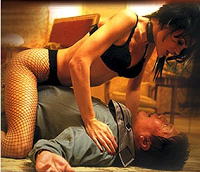