Alex thought it was weird how blissful his sister Rachel was every time she came back from babysitting for the Revis family. She was pretty chill usually, so the bouncy, giggly Rachel that came home from their house most Friday nights was very different from her usually friendly but quiet self. When he asked why, she just shrugged and said she felt happy afterward.

He wanted to find out for himself what was going on there, and devised a plan to do exactly that. He’d bought this old medallion at a weird old pawn shop a few weeks ago, which the shop owner claimed could transform anyone who touched it into whoever owned the clothes they were touching. He’d been skeptical, but the promise of a full refund if he wasn’t satisfied won him over. And when he tried it with a pilfered shirt of his sister’s, he’d been shocked to actually find himself in an exact copy of Rachel’s body.

He had motive and means, but lacked opportunity. Fortunately, it came knocking just a few weeks later. Rachel had to leave town for the weekend to attend the state tumbling competition, but she’d forgotten to let Mr. & Mrs. Revis know. In a panic, she asked Alex if he knew anyone who could fill in. Sensing his chance, he promised to find someone for her. She gave him a quick hug and dashed off to catch the college’s bus in time.

Alex was ready to put his plan into motion. Even better, he’d found a skirt that Rachel hadn’t worn yet and had discovered that it would turn him into a girl who fit the clothes but not his sister specifically. He grabbed the skirt and the medallion and watched in fascination as his body warped and shifted into soft, graceful femininity. Sure, he’d lost his dick for the moment. But with any luck he’d soon be gaining first hand knowledge. Another half hour of dressing and prep and Alexis was ready to go.

Mr. & Mrs. Revis welcomed Alexis into their home warmly, thanking her for taking the evening’s job on such short notice and showing her into the living room. They offered her a drink, which she accepted, and the three sat on the couch to talk as Alexis sipped the sweet, slightly tangy juice they’d brought her.

After perhaps ten minutes Alexis began to wonder why they hadn’t left yet. Surely they had a good feel for her now, and their questions about her were becoming hard to answer with just moments to come up with each one. And besides, she was feeling so warm…

The warmth grew and expanded over the next several minutes until it was a ball of heat in her lower belly. Alexis flushed in embarrassment as she felt herself getting …her pussy getting…wet. And her hardened nipples were demanding attention too. She knew that as soon as they left she’d be running to the bathroom to give this strange new body some in-depth exploration.

Finally Alexis was so distracted by her body’s sexual heat that she lost focus and began stammering her replies as her breathing got heavy. Mr. Revis smiled, “I think she’s ready.”

He stood up and Alexis wondered vaguely if they were going to introduce her to the children now. For that matter, why hadn’t she seen any kids…? Then, rather than moving away, he faced her and pulled out his cock. Oh. Apparently there weren’t any kids, then. Alexis stared at the hardened dick, stunned and… and aroused. Gently, he pulled her off the couch and guided the entranced former male to her knees. Mrs. Revis’s hand cupped the back of Alexis’s head gently, urging her forward toward the object of her attention.

When everyone was dressed again, the Revis’s paid her for her “babysitting” and asked her to come back again the next week. “But what about Rachel?” she asked.

Mr. Revis just smiled, “There’s enough for both of you lovely girls, don’t worry. And you enjoyed your new position with us so much, it’d be a shame for it to be a one-time thing, Alexis.”

She giggled and nodded, “Okay! I’ll totally talk to her!”

Rather than worry about explaining everything, Alexis just did what she could on the way home: she kissed the medallion in thanks, and tossed it as far as she could into the woods along the side of the road. No way was she ever going back- her sister and parents would just have to deal with the new situation. She may have lost her dick, but she’d gained both some new employment and a new appreciation for others’ dicks that she wasn’t about to give up. 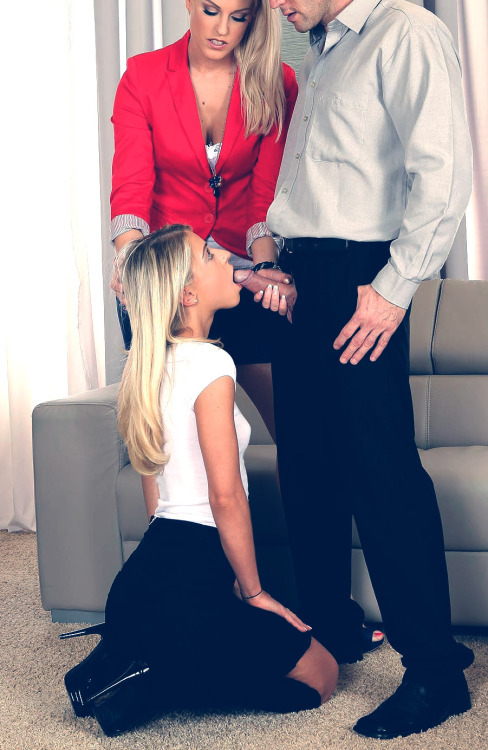