Experiment for a Pardon

Hank agreed to allow an experiment with alien technology for a pardon from his long prison sentence. It was supposed to be a type of gender change device, since the race that built it, used it to change genders if necessary for the species to continue. A single craft that crashed left this particular piece of technology intact, apparently it was well protected aboard the ship.

Not really expecting it to actually work, Hank went through with it. Much to his surprise, his hair grew out, his height lowered significantly, his muscle tone decreased, as he became softer and curvier. His ass and hips expanded, as his hands and feet got smaller. His privates became the typical female indoor plumbing. His face rearranged itself to a more feminine form, and also, the most prominent feature, that would really display his new status as a female, were the breasts! They formed last, and form they did! The weights were tremendous, the boobs so sensitive. His areolas the size of half dollars, his nipples huge, and his boobs were eventually 32Q in bra size. He would basically need a bra much like a twin parachute to hold these luscious new torpedoes.

We see Hank here pulling down his orange overalls, the prison outfit, partly in shock to see what was happening, and partly because they were pushing too hard against it. At least his tank underneath would stretch enough to encompass these massive melons without much restriction. The look on his face said it all, as reports got photos, and he got his pardon. Hank was free but would now have to start over as Hannah, free from prison, but not from the two huge weights he now carried with him wherever he, no she went. 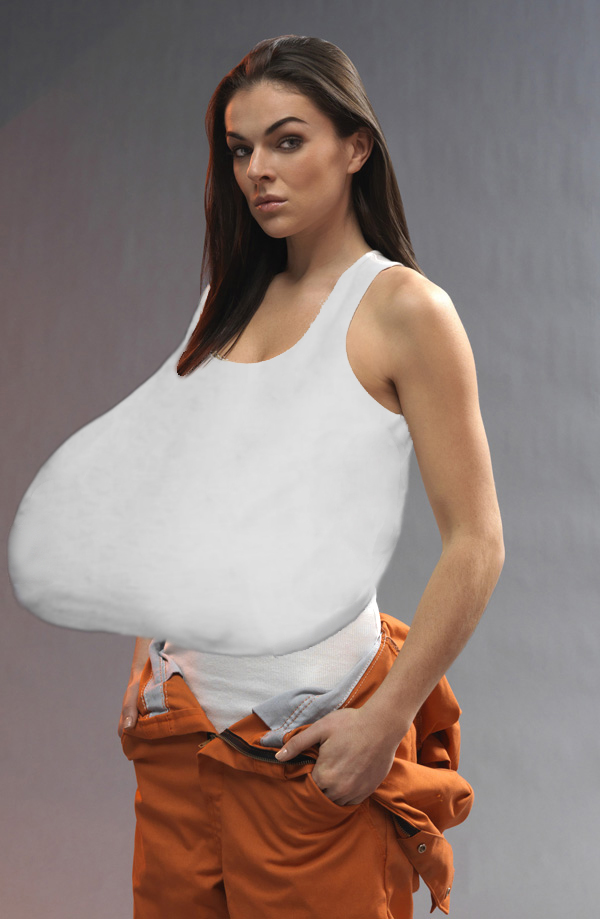