Carrots are good for you

Kyle opened the door to Paul´s apartment, seeing his friend sitting in the sofa with his feet on the table watching TV.
“Hey!”, alerting Paul that he had arrived.
“Hey! Come right on in”

“Why do you have those ridicolous bunny ears on the table? Easter is still a couple of months away”. Kyle picked them up and examined them. Quility manufacture at least.
“I just bought them because I was curious”, Paul was picking up some stuff at the refrigerator.
“At what? How you would look like a bunny?” he grinned at his buddy. Paul put them on and mocked his friend: “Look at me, I`m a cute bunny rabbit”, impersonating Elmer Fudd. It didn´t really fit in.
“Here! Catch!”
A bundle of carrots flew through the air and hit Kyle. “Haha, very funny. Carrots for the bunny”. Kyle was just about to throw them back at Paul but something hindered him. Lifting one of them up to face he began to study it. It was just an regular carrot but he had a yearning for it. He put a couple if inches of in into his mouth, “so long and hard”, he absentmindedly thought. He took a bite, chewed it vigourosly and swallowed. It tasted like the nectar of the gods.
At the same time his hips grew a little.
Downing carrot after carrot, with a ravenous appetite, the changes washed over him and his body became more and more female with every piece of carrot. When the physical changes seemed to have stopped the clothes had changed next into a thin, white lingerie.
Kyle watched the whole spectacle with an amazed bewilderment. The salesman had been true to his word. Feed the wearer of the ears the proper catalyst and you would have your very own bunny girl.
Now he just had to feed her his own ´carrot´ to complete the transformation to his servant and girlfriend. 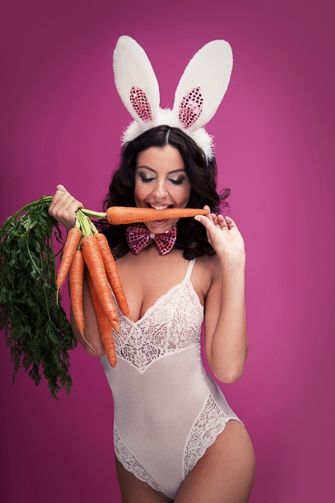