“Dad, can you get my backpack from my closet? I forgot it at home lol. thx”
He put his phone away and headed into her room. She had recently bought the new autocloset with the money she had saved fro her new job, so he knew he was going to have a hard time finding her backpack. He approached the screen, looking for some way to summon the backpack.
“School,” said one of the buttons. Eager and hopeful, he pressed it.
“School Preset Engaged.”
Two robot arms flew from the closet walls and grabbed the man, ripping the clothing off of him.
“Wait, no!” He screamed.
“Sore throat detected,” said the screen. A metal tube was shot down his throat, spraying a foreign liquid over his vocal chords. It quickly retreated back.
“What the fu—,” he covered his mouth. He sounded feminine!
“Begin grooming,” the screen said.
Two new arms appeared, one to shave him while another injected botox and other chemicals into his skin. Lotion was applied all over his naked, smooth body. He couldn’t see a wrinkle on him anymore, despite his age. A wig appeared from the distance and attached itself to him, despite his protests.
“Apply makeup.”
The two arms retreated, replaced by new robotic arms wielding makeup tools. He felt his face become coated with powders and liquids while his fingers and toes were painted and manicured into a fashionable french tip.
“Begin dress”
His penis was pulled back contorted as panties were yanked up his body. Two fake breasts were glued to his chest and wrapped in a bra as socks were being pulled up his feet. Within seconds he was wearing a complete school uniform.
“Complete.”
The door opened and the man staggered out of the closet as he was sprayed with perfumes. He sat down in a chair next to the window and examined himself. He felt so small and dainty, his body perverted by that machine. He couldn’t even find the backpack, either! 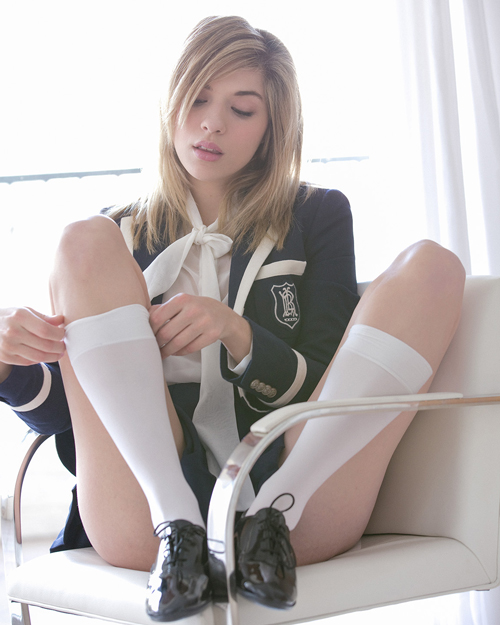