By reading the title of this caption, and looking at the picture, one could infer that obviously this is the fate of the abusive boyfriend as shown. The fact of the matter is yes, and no….

First this was the abusive boyfriend Lee’s girlfriend Sarah, shown in the picture. He tied her all up and was rough and abusive with her with bondage. She said she liked some bondage, but he took it too extreme. She tried to tell him to stop, but her mouth was gagged. Her boobs really hurt and were almost purple! She had the look of being upset on her face, but that look changed a bit more, to a horrified look.

That’s because at that moment, as we see in the picture, Lee realized he was now the one tied up with the squished boobs and pleasured pussy. He felt the pain of his own tits, even though it was odd feeling them at all, never having them before now! He looked on to see his former hand pushing a toy into his new vagina. It was his former body! He was looking at himself!

All his body said was, “Don’t worry I won’t be too rough with you, SARAH!”

She was apparently in his body and he in hers, and she called him by her name as he was in her body now!

“You’ll submit to me Sarah, or I’ll make your life a mess, got that? If you don’t agree, I’ll squeeze tighter on those nice tits of yours! Also, if you say you’re not Sarah, and you’re a dude, I’m going to have you sent to the funny farm? Got that? I’m LEE, I’m the man in this relationship, and you are the CHICK, live with it!”

The new Lee began to squeeze harder, and massage her former pussy hard too, a mix of pleasure and pain for the new woman.

“So, nod your pretty head if you agree, SARAH,” said the new Lee.

Lee, now Sarah, nodded, not knowing what else to do. Sarah, now Lee loosened the restraints a bit, but would keep her tied up for a good long while, until she was certain Lee agreed to the arrangement wholeheartedly! Then and only then would she let him go, and even then he would be in her body for good, and the woman in their relationship now.

This was actually Sarah’s plan all along. She lured him in this way to swap their bodies, and what better way to do it, than to already have her body tied up when he entered it? Then she could make him submit to her before being let go from restraint. Too add a bit of insult to injury, she threw out a pink bra and panties set on a bed nearby, some pink ballet flats with bows, along with tight fitting black capri leggings, and a small pink t-shirt that said, “My man is in charge, and I love it!”

“When I eventually let you go out of those, you can get into those on the bed, got it Sarah? You are going to dress the part too, and I’m sure those tight fitting leggings will make that lovely ass of yours stand out even more! Welcome to womanhood, Sarah, I hope this isn’t too much to take in, but if it is, just think, our former 11 inch cock that I now possess might be a whole lot more to take in! Deal with it,” said the new Lee.

Tears rolled down the new Sarah’s cheeks as she realized she was not only in bondage now, but would be for a long time to come, with hear overbearing new boyfriend. 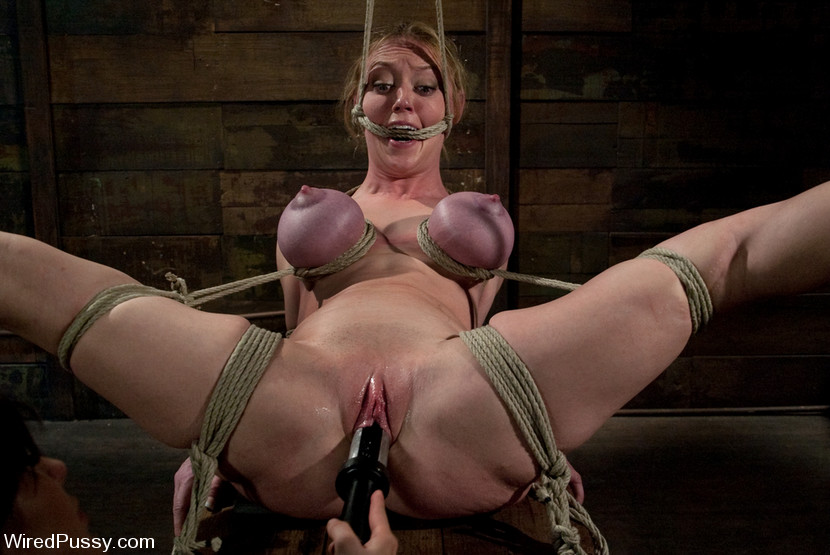