That’s What Friends Are For

Kelly was in her fourth year of training as a witch and had just finished learning how to perform a body swap spell. She had swapped bodies with other women in her class and she loved feeling what it was like to have different sized boobs, or longer legs, or to be a different ethnicity. But she wanted more. She wanted to see what it was like on the other side of the gender fence.

Kelly and Dave had been friends for ten years but had never gone beyond that. Dave was never lucky in the love department and had just been dumped again by a girl he really liked. He had been depressed for a while so Kelly saw him as the perfect candidate to swap with. She trusted him with her body. She knew he wouldn’t get all pervy and start sending naked pictures out to his friends. The hard part was convincing him.

“It’ll just be for an hour, maybe two,” Kelly begged. “Don’t you want to know what it’s like to have a set of these?” she said as she squeezed her boobs. “You can touch them all you want when they’re yours.”

That intrigued Dave. Kelly was a beautiful girl and never had a problem meeting guys. He would sneak a glance at Kelly’s rack or ass every now and then but knew they would never be more than friends. It’s hard for a guy not to check out a good looking chick, no matter how good of friends they are.

“Fine,” Dave surrendered. “But only for an hour!”

“Yay!” she squealed and kiss Dave on the cheek. “I’ll be right back. Since you’re doing this for me I’m going to show you how much fun it is to have a woman’s body.” Dave was left wondering what that meant as Kelly went into her bedroom.

Fifteen minutes later she emerged and Dave was speechless. Kelly was now clad in thigh high stockings, a thong, and a bustier, all in black lace. Her breasts were squeezed together by her top and on display for the enjoyment of any man lucky to be in the same room as her. Dave was amazed that she was wearing such an outfit in front of them until the reality set in that soon he would be the one wearing lingerie.

Kelly sauntered towards the middle of her living room and instructed Dave to come to her and place his hands out facing down. She placed an open notebook on the coffee table and put her hands under his. She caught him staring at her cleavage.

“Wait until you see them from this angle, sweetie” she joked. Dave’s eyes quickly met hers and he blushed. “Are you ready?” Kelly asked. “Sure. Why not?” Dave responded nervously. “Close your eyes.”

Kelly started reading from her notebook. Dave couldn’t understand a word of it but was able to catch on that she started chanting the same few words over and over. He waited for a flash of light or a clap of thunder to signify that the swap had occurred. Those were not necessary. The sudden feeling of a material he had never worn before encasing his legs was enough of a sign.

“Open your eyes,” a familiar voice instructed him.

The first thing he saw was his own face grinning ear to ear. “How do you feel?” Kelly inquired from Dave’s body.

That was a loaded question. Dave began to take a mental inventory of new sensations that ran throughout his body, his chest being the most apparent. The weight of his breasts was being supported and displayed by a garment that accentuated his hourglass figure. The padded cups did what they could to contain his aroused nipples.

Barely there underwear nestled between his ass cheeks and clung to an unfamiliar smooth crotch. Dave always assumed thongs were uncomfortable for women. Looking over his shoulder running his hand down his ass helped him appreciate the feel and aesthetic of a thong separating a woman’s ass.

Kelly wasted no time stripping down and getting down to business. “Men’s bodies are so boring but THIS,” she boasted wrapping her hands around her new appendage, “is a whole new ball game.” She began to stroke the quickly hardening cock with both hands. Dave was never one to brag but he was pretty well equipped.

“This is amazing!” Kelly exclaimed between groans. “You should try yours.”

Dave had to admit that the sight of a man playing with himself was hypnotizing. He coyly put two fingers against the cleft between his legs and began to rub as he used to when he was with former girlfriends. He was not prepared for the feelings it produced. He was unable to stop himself from moaning as he soaked Kelly’s underwear with arousal.

Dave’s other had absentmindedly made its way to his chest and reached into the bustier. He pinched and rubbed his nipple sending shockwaves down to his glistening pussy. He finally stopped paying attention to the body he was in and looked towards the one he formally occupied.

Kelly was completely naked and furiously jerking off as she watched Dave discover his new femininity. “My body looks so fucking good from here!” Kelly said without stopping. “We have to fuck. I’m totally giving you permission to let me fuck my body.”

Dave tried to wrap his mind around that statement but it was clouded by the intense pleasure that radiated from his chest and groin. All he could do was nod while his hands continued to explore his body.

They stopped groping themselves like teenagers long enough to go into the bed room. Dave was thrown off by his wide hips but loved the way his ass and tits jiggled with every step. He lay down on Kelly’s bed and look towards his old body for instruction on what to do next. Kelly reached towards Dave and took hold of his panties. Dave raised his hips from the bed and allowed her to remove them. He had never felt so exposed as he did when his pussy was revealed.

Kelly threw the thong aside and dove towards Dave’s chest. She sucked and nibbled on tits that were on her chest ten minutes prior. Dave gasped and wriggled his hips until he felt the hardness between Kelly’s legs meet his aching opening. Kelly broke away from his tits and looked down towards her old face. She could see that want in its eyes.

“This isn’t what I planned but it’s what we both want,” Kelly stated with certainty. “Tell me now if you don’t want to go through with this.”

Dave looked past his heaving tits and stared at the cock resting against the vagina that was now his.

He watched Kelly guide her rigid cock towards his waiting pussy.

As Kelly entered her body with Dave’s cock she knew this wouldn’t be the last time they swapped. Fortunately for her the spell to swap back was in her other notebook that she had left at school. Dave wasn’t even mad. 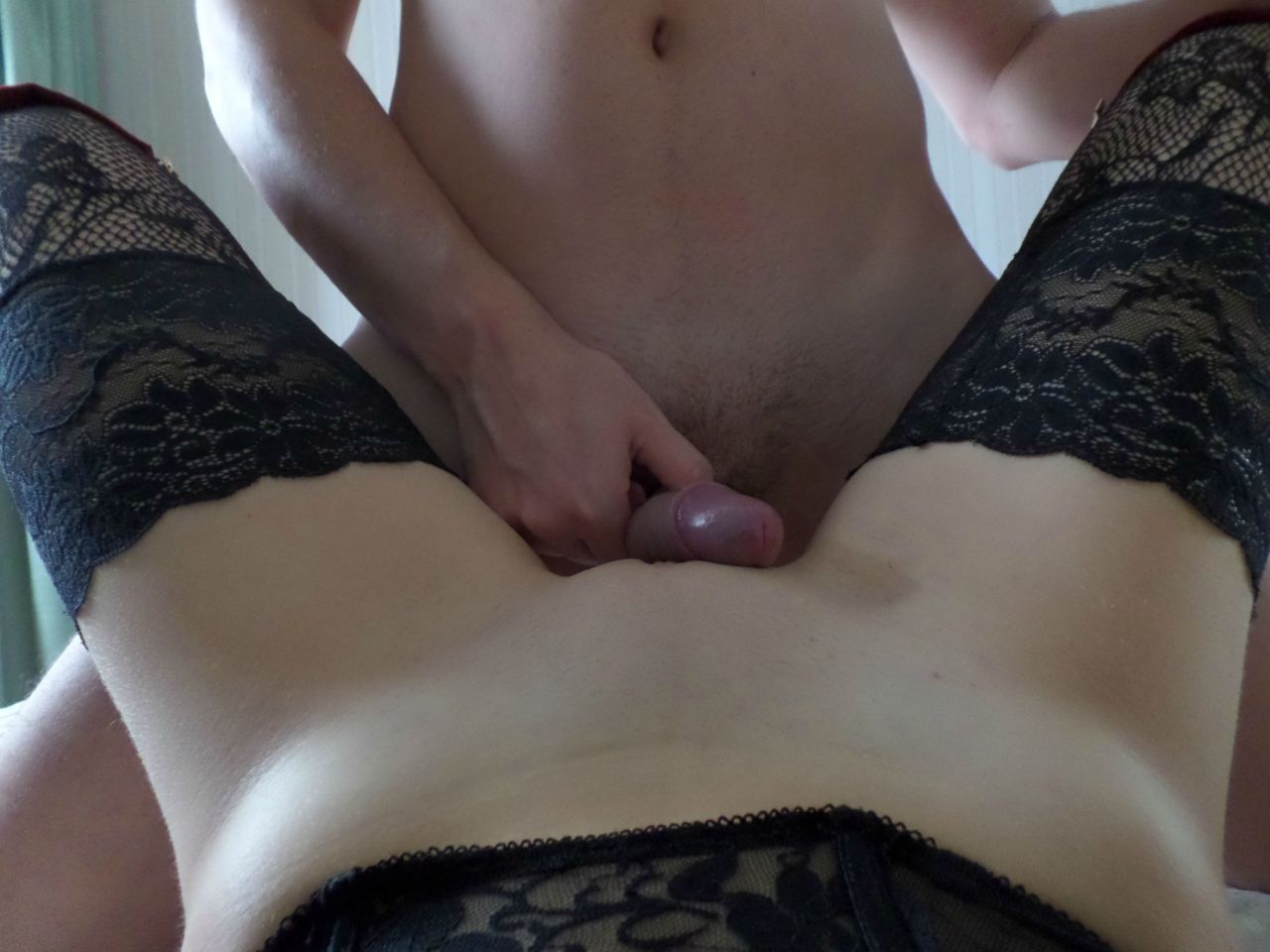 While the Wife’s Away…