Paul called out for reinforcement as the swat team that entered their offices to bust their drug lord boss wasn’t sufficient. Paul had found a genie earlier that week, and she was away from her bottle in his pocket. She had patiently been waiting for him to make a wish, so asked him again, through all the commotion and gunfire, while he was hiding under his desk, the informant that got the swat team involved for the bust.

“Master, do you wish for reinforcement?”

Paul replied, “I guess my life is on the line, I’ll probably die any moment now if I don’t do something, I guess using up my one and only wish to survive is smart. I don’t see the reinforcements I sent for coming anytime soon that is for sure, probably stuck in city traffic no less! Fine, Genie, I wish for reinforcements.”

“GRANTED,” said the genie and made the wish possible.

The swat team and the gun battle for that matter, Paul would soon find vanished, and there would be something else vanishing too, shortly! Suddenly he wasn’t under his desk in hiding, he was no top of it, staring at long smooth pantyhose clad legs, and feet that were small and cute, and the toes were in some kind of reinforced nylon!

Paul knew something was off, he felt weird, and seeing he was now in a skirt, with pert boobs underneath his open shirt. He felt softer, and curvier, and was astonished he had super long hair cascading around his face and arms.

Paul said, astonished, “What is the meaning of this genie, and where did all the swat team and gun battle go, and my body and my… my… voice, I’m a… WOMAN?! Genie, what did you do?!”

The genie replied, “Master, or well I should say Mistress now, I granted your wish. You said you wished for reinforcements, right?”

Paul nodded his pretty head a bit, shocked at how he looked and felt.

The genie continued, “I granted your wish, I gave you reinforcements. I gave you pantyhose with reinforced toes, and the body to go with them! Isn’t that nice? You are a female employee now, required to wear pantyhose to the office, so now you can have reinforcements anytime you are at work. Also, I put you in a new reality so only you and I remember Paul, you are now Pauline, short brunette secretary. You’ll be happy to know in this reality your drug lord boss isn’t a boss or a drug lord either, so there is not threat here. You are just sitting on your desk at break, resting your tired, cute feet on the desk, after kicking off your sexy four inch shiny black pumps, of which heels are also a dress requirement by the way.

You see since in this reality you were born Paula, you didn’t become the top exec at the company, instead a pretty secretary, hoping someday to move up and prove her worth. You are too young to be an exec, you are actually twenty years younger now too. Since you never started twenty years ago with the company, where you inadvertently sent documents that led the drug lord to your company, and later to be your boss.

Instead you started twenty years later, now, at age twenty, and here you are. The drug lord never seen the opportunity provided here, so he never came here. Instead he fell out of a plane ten years ago, “accidentally” with a “friend”, a competition drug lord so to speak. All is good here, your new boss is on the level, in fact SHE wants to move your pharmasueticle company beyond just medicine, and into fashion as well. In fact you are wearing the prototype pantyhose for her new women’s intimates line, with reinforced toes so they don’t run from toenails or hard skin by the toes! How do they feel, Pauline? I hope good, they might make the company a lot of money.”

The new Pauline just sat their on her desk, noticing how her ass felt like pillows now, large and soft and round, wondering what she was going to do, her one wish was used up, this genie was crazy, and she would have to not only be a woman from now on, but work her way back up the corporate ladder. The good note is, the drug lord is dead, never took over the company, so there is no threat to need the actual reinforcements he was wishing for to begin with. Despite all of this too, Pauline wiggled her cute little toes a bit in the hose, and thought the reinforcements were good, on a wonderful feeling pair of nude pantyhose! If she had to wear hose, these were great. Now the heels, they look intimidating!

The genie smiled, thinking she did a service to her Mistress, winked and left, along with her bottle that was at Pauline’s house. Speaking of which, her new house in this reality would shock her with the floral curtains, and bright blue furniture, along with her entire action movie collection replaced by her chick flick collection! On top of that, there were fruity wine coolers in the fridge with tofu, no meat in there to speak of and no beer.

As Pauline seen some of this, she said to herself, “Oh the life of a chick. I suppose it could be worse, though, I could be dead, at least now I’m younger, and way better looking. Who knows, maybe I’ll be in charge of the company in twenty years? I’ll have to admit, though, my new boss is into something here. I’ve been in these pantyhose all day, and I don’t even want to take them off at home!” 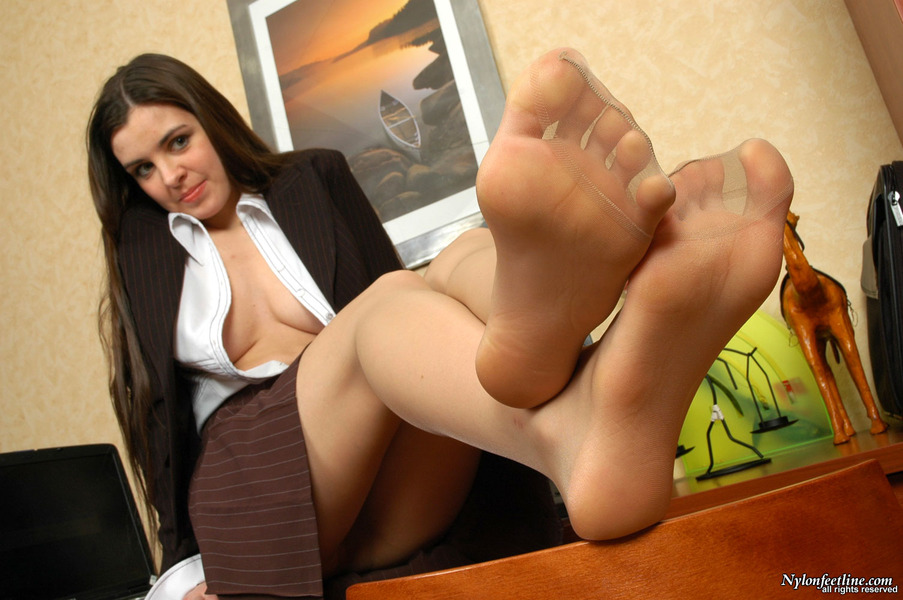