The professor paused to look back at the small stone temple. What was I doing here? How did I get so wet? When did my hair get so long? Why an I so confused?

Professor Hans Anderson was a noted archeologist and expert on ancient Greek history, But his real passion was ancient Greek mythology. Through years of research, he had become convinced of the existence of a lost temple to the Goddess Aphrodite, and now he believed he had discovered its location. He set out by boat with only two grad students, Peter and Dave, for company to a small rocky island far out in the Aegean Sea. While Peter and Dave set up camp on a rocky beach, the professor raced inland to search for the ruins. He finally found it, hidden away in a steep canyon. He was astonished. This was no ruin but an intact temple. Forgetting sound archeological practice in his excitement, he raced through the open door. Inside, there was a stone altar set before a small bubbling spring of clear water. On a wall, written in ancient Greek on a stone tablet, was a warning. “THIS IS THE DOMAIN OF THE PRIESTESSES OF APHRODITE. MEN MAY ENTER ONLY AT THEIR PERIL” While the professor was trying to translate the tablet, there came a deep rumbling sound. Suddenly a great column of water gushed from the spring hitting the professor with enough force to wash him out of the temple. Shakily, he got to his feet. Only where once stood an aging college professor, there now stood a blond beauty. A long thin red robe clung tightly to her curvy body.. Wetly displaying her shapely rear and large breasts. She glanced back at the small stone temple then headed toward the beach where she knew her students, Peter and Dave, would take care of her. From inside the temple there came a low chuckle. 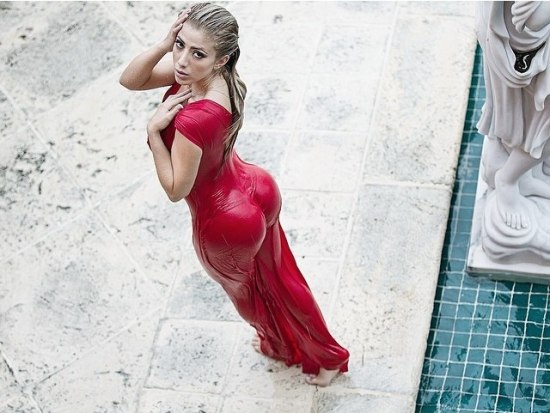