It was a bright Saturday afternoon and I (Dave, 24 years old) and my wife were headed to Barry’s BBQ party. We arrived I quickly met up with my old friend Jesse, while we went off to talk with a couple of beers, our wives went off to socialise with everyone. After a while Barry walked out with a controller, but it was different, there was something attached to it with a blinking light. Before anyone could say anything he pressed a button and suddenly everyone felt the shock from the chips in the back of their necks and had become completely obedient to him.

“Ok, everyone stay calm and quiet” he said and everyone felt completely relaxed “As you can all probably tell, I’ve modified my controller and now you are all going to be my harem! Now get back to enjoying the party!”. Everyone went back to their conversations and eating their finger foods. Barry walked over to Jesse and myself.

Barry: “Enjoying the party? How do you feel about the whole ‘becoming part of my harem’ thing?”
Jesse: “Well, it wasn’t exactly what I was expecting when I came here…”
Barry: “Ha ha, yea well, I guess we had better get this under way. Why don’t you two come up to the food table and we’ll get you set up.”

We both followed Barry up to the food table where everyone was watching, he picked up a cup full of mini doughnuts and handed them to me. “These will slowly turn you both into the girls you will be from now on, now why don’t you go, sit over there and feed them to each other.”

We walked over to the chair and sat down, I ended up taking most of the chair as I was so much heavier than Jesse. I picked up one of the doughnuts and started to slowly feed it to Jesse, it was so weird as he slowly nibbled it. By the time he had finished he was looking rather feminine, his hair had turned black and grown a bit longer.

It was then my turn, Jesse picked up a doughnut and put it up to my mouth but I had the impulse to eat it all at once and so I did. The second I took it and started chewing massive waves of pleasure were radiating through my body, knocking me off my chair. By the time I pulled myself back onto the chair I had lost most of my body weight and was looking a lot closer to how Jesse looks.

Several minutes later and several doughnuts later the cup was empty and there we sat as two Japanese girls, it was a little unbelievable as I sat there with my shirt reaching halfway down my legs, Jesses clothes were loose too but weren’t far off her new frame. “Oh, looks like you two are done, why don’t you come over here and we’ll get you dressed.”

We stood up to follow him, as I stood up my pants fell down with my pink boxers with love hearts on them, I would normally be embarrassed but it somehow didn’t seem appropriate. As we walked back to the table we saw a couple of boxes, one with Jesse’s name on it and one with mine. I opened my box to find some lacy pink lingerie complete with heels, looking over at Jesse and she had a similar outfit but in blue.

“Gather around everyone, Jesse and Daria are about to put on their very first set of sexy lingerie, lets give them plenty of encouragement!” Everyone started cheering, even my wife was screaming for me to “take it off”. I took off my shirt, letting it fall to the ground, and stood there naked next to my naked friend in-front of this massive crowd.

I pulled the top out of the box and over my head, it felt amazing as I pulled it down, I noticed that my nipples felt a little uncomfortable so I needed to adjust my boobs. Next up I pulled out the pink panties and slipped them on immediately, they fit my new form perfectly; I ran my hand along the crotch and it was like electricity was coursing through my body.

I then started putting on the cute yellow socks and the heels, I thought that I would have problems standing in them but I found it more comfortable than any shoe I’ve ever worn, even better than being barefoot. Lastly I grabbed the scrunchy out and put it in my hair, there was something really exciting about playing with my hair.

I looked out over the crowd and they were still cheering, I looked over at Jesse and she was dressed just like me but in blue and white with a cute bow. We heard my wife shout from the crowd “Give us a spin” and suddenly we were both giving the crowd a sexy little twirl. That’s when Barry walked up to us, handed Jesse another cup of doughnuts. He then told us they were special and we should only eat one each and to savour it.

I looked over at Jesse and I knew I wanted her, I practically leaped into her arms and we started making out. A few minutes later and Barry walked over “Having fun”, we looked up and were completely taken aback by how hot he was, “Well, time to see how well that last one works.”

He undid his pants and pulled his cock out, it was huge, he must’ve used his controller to make it bigger. We both leaped out of the seat and went to town, nothing had ever felt better in my life as I ran my tongue from the tip right down to the balls, this was absolute heaven. 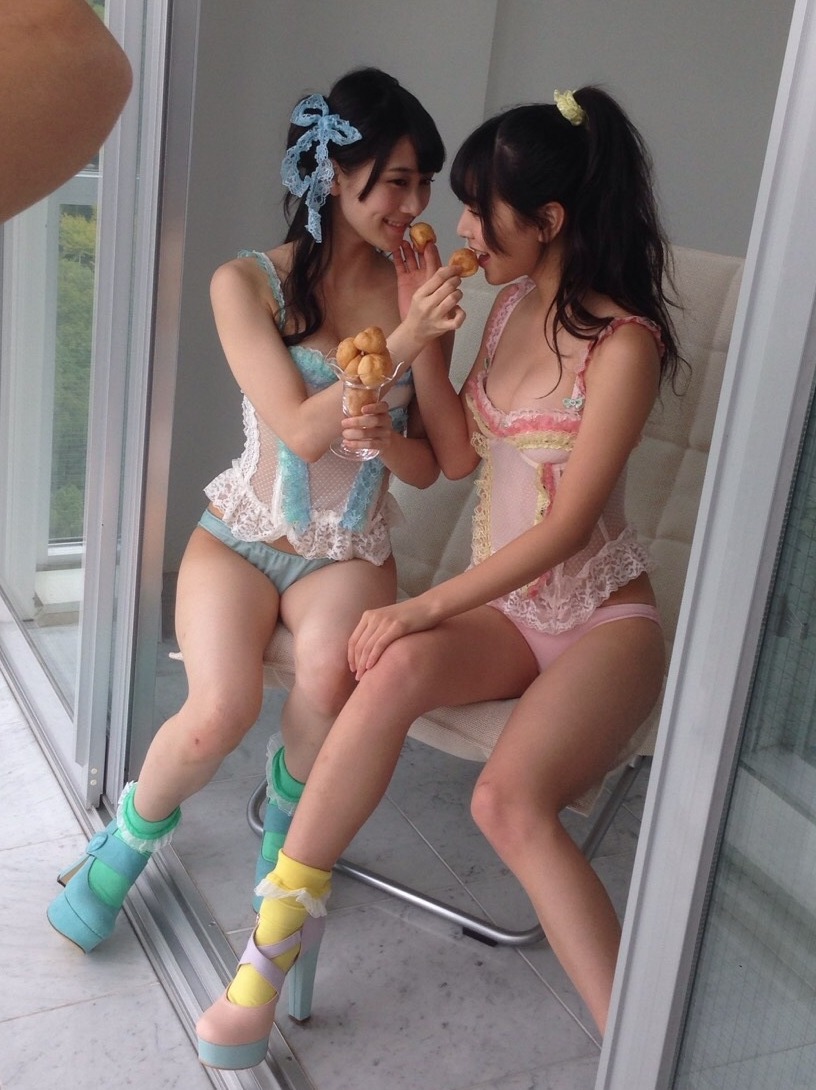