New Experiences Air offered first class to many people free of extra charges during their first month in operations. They claimed it was discounted, as they wanted many of their new customers to experience the services they had to offer as opposed to airline competitors.

Jerry on the left was enjoying his first class status at no extra charge, and had already ordered much from the alcohol selection. He was woozy a bit, and then couldn’t believe what he was hearing from the stewardess.

“Sir, would you like to try our swap experience? I know it might sound strange, but you get to swap with one of our stewards or stewardesses so you can roam around the plane and see how we do our jobs. It’s just a temporary swap, not a big deal for someone open to new experiences. What do you say,” said Sarah the stewardess.

Jerry drunk already was stunned, and didn’t believe it, even drunk, “Are you serious? Swap bodies? How is that even possible? I can pick who I want? What the heck, I’ll try it, it probably won’t even work anyway, more like swap jobs, I get up and do your job or something right?”

“No you would swap with one of us, as we are already in uniform, and ready to serve. It’s a new experience ok? Now who do you want to swap with? You can pick one of the others, a steward perhaps even, but you could just pick me, I’m right here, and I wouldn’t mind a break. What do you say? It would be a new to you to be a woman right?”

“Um this is really strange, there is no way this would work, all what the heck, sure why not? Let’s do this,” said Jerry.

She touched him with some device, and instantly they were looking at themselves! Jerry was utterly shocked, touching his new uniform, and especially his breast area! He had boobs under there! He felt the golden strands of silky hair as well, and then noticed the long manicured fingernails on smaller, softer hands. He spoke in his new voice, stunned that he sounded like the stewardess!

“See, I told you it would be a new experience,” said Sarah in Jerry’s deeper voice smiling.

Jerry as Sarah, had to see what was below, and swatted down to hike up her skirt with no one noticing, and under the sheer black pantyhose, felt her new pussy lips and clit! She had no underwear under these sheer hose, and could feel the ultra sensitive skin of her new sexy just below the nylon! The clit felt really good.

Rubbing his new pussy, Jerry said in his new voice, “I can’t believe this! This is so strange, yet amazing! I feel so different, but yet I feel so good? I’m a flippin’ stewardess! Look at these boobs, these legs! I’m a knockout! I guess I could do this for awhile.”

Sarah smiled in his body, and pinched his new larger bottom, as Jerry got up while pushing the skirt down. He felt weird having his former body grab his ass, he was the woman getting fondled by a man! He did realize why she wanted a break however, hurt feet were sore in the heels, but he didn’t care, they were sexy heels, and he no she was a sexy woman! 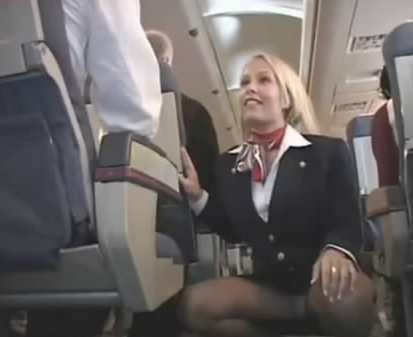